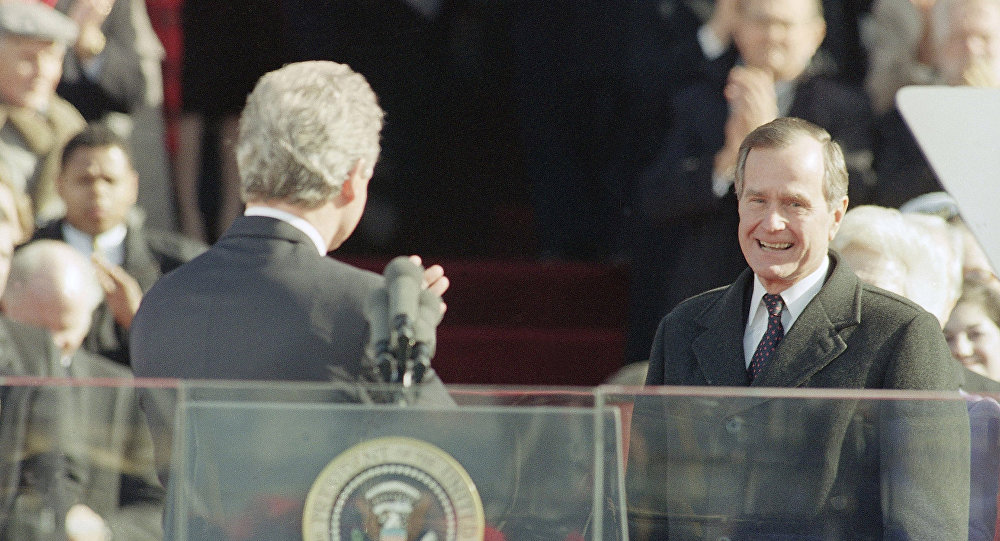 George Herbert Walker Bush's death at the age of 94 made international headlines on Friday. The 41st president continued to influence the US politics, in a way, even after his demise as Donald Trump cancelled a scheduled G20 presser out of respect to his late predecessor.

Tributes to ‘Bush Senior' have been pouring in online after his twenty-five-year-old kind-hearted note to Bill Clinton was circulated on the internet.

"Dear Bill," read the note then-outgoing President Bush left to new incumbent Bill Clinton in the Oval Office on January 20, 1993. "When I walked into this office just now I felt the same sense of wonder and respect that I felt four years ago. I know you will feel that, too."

"I wish you great happiness here. I never felt the loneliness some Presidents have described," Bush continued in a somewhat heartfelt manner — an exchange hardly expected between two presidents in today's highly divisive political environment in the United States.

Somehow I can’t imagine Obama’s Letter being as meaningful. Prove me wrong

trumps note to the next president will be a tweet…

"There will be very tough times, made even more difficult by criticism you may not think is fair," Bush 41 wrote, perhaps in anticipation of the Monica Lewinsky sex scandal, as some people have noticed.

Clinton certainly did “feel some happiness” in the Oval Office.

Loneliness in the oral….errrr Oval Office, I never felt that either.

"I'm not a very good one to give advice; but just don't let the critics discourage you or push you off course. You will be our President when you read this note. I wish you well. I wish your family well.

Your success now is our country's success. I am rooting hard for you."

During the explosive 2016 presidential campaign, the letter resurfaced through the efforts of Hillary Clinton, who posted it to remind that hostilities should not prevent the rivals from defending democracy.

You may have noticed a letter that went viral on the internet this week. The letter is from George H.W. Bush’s presidential library. I hadn’t read it in a long time, until yesterday. It moved me to tears, just like it did all those years ago. It’s the letter that President Bush left in the Oval Office for my husband, back in January of 1993. They had just fought a fierce campaign. Bill won, President Bush lost. In a democracy, that’s how it goes. But when Bill walked into that office for the very first time as President, that note was waiting for him. It had some good advice about staying focused on what mattered, despite the critics. It wished him happiness. And it concluded with these words: “You will be our President when you read this note. I wish you well. I wish your family well. Your success is now our country’s success. And I am rooting hard for you. George.” That’s the America we love. That is what we cherish and expect.

Now that Donald Trump has set himself at odds with a significant part of voters with his fiery rhetoric, some point out that he could learn a thing from the late 41st president.

Class and character is something that can’t be bought. Our current President teaches us this everyday.

Dear America, could we please return dignity and moral character to the office of the president.? We used to be like that.

It is hard to see him go and even more painful as lack of dignity and lack of statesmanship now fills the White House.