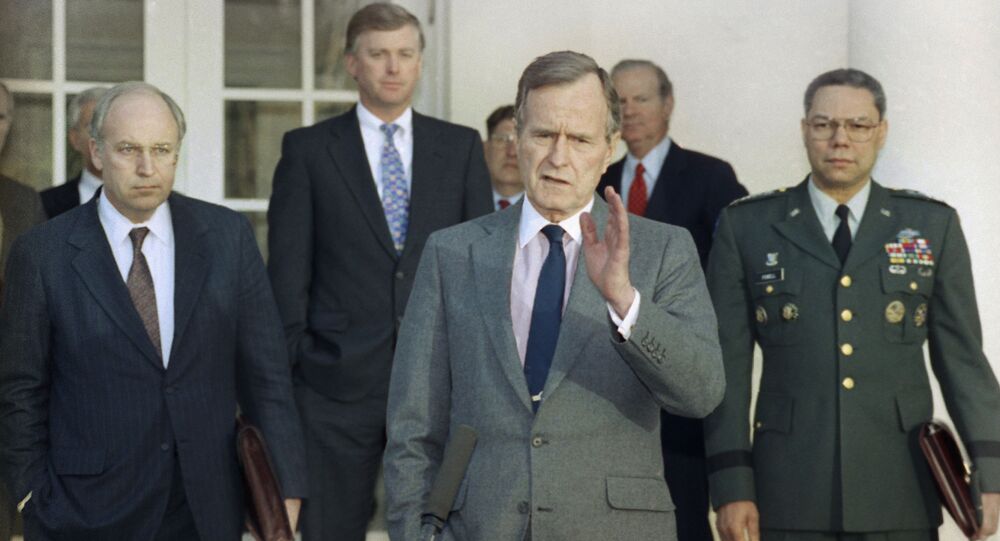 George H.W. Bush, the 41st US President, died on November 30 aged 94. The nation's longest-living president, during his single term in office he oversaw the end of the Cold War and aspired to secure the United States' dominancy in a changing world.

In a three-decade-long political career which climaxed in the highest office in the United States, George H.W. Bush served as a Texas congressman, a US envoy to China and the UN, a CIA director, and a vice president under Ronald Reagan.

He became the latest American president to date to have occupied the White House for a single term before losing to Bill Clinton in 1992. As president and a former intelligence chief, Bush 41 devoted much of his attention to foreign policy and has been widely criticised for neglecting domestic issues.

The Times They Were A-Changing

The Tiananmen Square protests, the fall of the Berlin Wall, the Belavezha Accords, NAFTA talks — George H.W. Bush served a turbulent term, given that it coincided with the collapse of the Soviet Union and the subsequent transformation of a bipolar world.

However, it is the 1991 Gulf War that is considered the centrepiece of his presidency and perhaps his biggest foreign policy achievement. The late president's White House biography labelled the conflict as his "biggest test."

The Gulf War, codenamed Operation Desert Shield in its combat phase, was a massive US-led offensive against Iraq and its strongman Saddam Hussein in response to the Iraqi invasion of Kuwait. The American-led coalition, which included Arab states such as Saudi Arabia, Oman, the UAE, and Qatar, fielded 670,000 troops, of which 425,000 came from the United States.

George H.W. Bush announced that his goal in the war was to oust Saddam Hussein's forces from Kuwait, "knock out" his nuclear bomb potential and destroy his chemical weapons facilities as well as artillery and tanks.

While Saddam was indeed driven out of Kuwait and forced into a ceasefire within 100 hours, he was nevertheless left in power. Moreover, even if Hussein's "nuclear bomb potential" was curbed and his "chemical weapons facilities" were destroyed, the 41st president apparently failed to root them out. His son, George W. Bush, alleged a decade later that the Iraqi ruler was in possession of chemical weapons and was pursuing a nuclear program — a claim that was used as a main pretext to invade Iraq in 2003.

While Bush Senior is no more, his Mideast legacy lives on. The 1991 war saw the United States build up its influence and military presence in the region and set up a network of military bases across the Gulf. It also fueled anti-American sentiment in the Islamic Republic that peaked post-Iraq invasion.

The Gulf War was viewed as the first test of the new world order which Bush proclaimed in 1991. "We will succeed in the Gulf. And when we do, the world community will have sent an enduring warning to any dictator or despot, present or future, who contemplates outlaw aggression. The world can therefore seize this opportunity to fulfill the long-held promise of a new world order--where brutality will go unrewarded and aggression will meet collective resistance," he said in a State of the Union address.

According to the late president, a new world order would mean collective security within the framework of international cooperation and the breakdown of Cold War-era principles. His speech came nearly ten years before the 9/11 attacks which marked a watershed moment for the United States and international relations.

The "new world order" idea has proven to be largely dystopian. Apart from securing the main place in a new system of international relations, the US ended up in a much more realistic world — more severe and less romantic.