'All Will Stay in Mexico': Trump Threatens to Close Southern US Border

WASHINGTON (Sputnik) - US President Donald Trump threatened on Saturday to close border with Mexico, if necessary, to fight illegal immigration.

"If for any reason it becomes necessary, we will CLOSE our Southern Border. There is no way that the United States will, after decades of abuse, put up with this costly and dangerous situation anymore!" Trump said on Twitter. 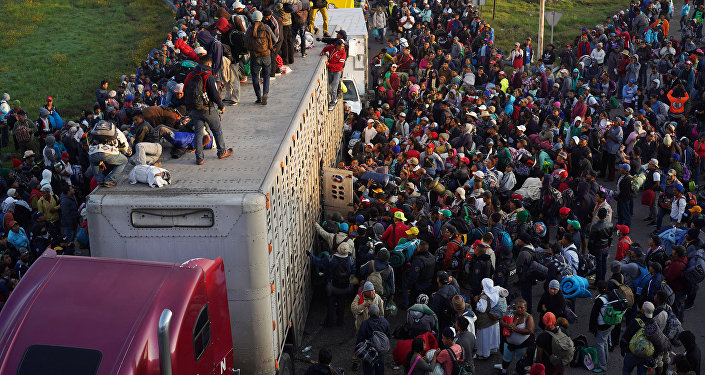 © REUTERS / Go Nakamura
US, Mexico Outline Roadmap Deal to Keep Migrants at the Border – Report
Trump reiterated that only those who are eligible for refugee status would be allowed in the United States.

“Migrants at the Southern Border will not be allowed into the United States until their claims are individually approved in court. We only will allow those who come into our Country legally. Other than that our very strong policy is Catch and Detain. No “Releasing” into the U.S. All will stay in Mexico," the president promised.

The president has made his statement amid the situation at the country's southern border, where thousands of immigrants from the poorest Central American countries — Guatemala, Honduras and El Salvador — are expecting to enter the United States from Mexico to seek asylum.

READ MORE: US Militia Groups Form Their Own Caravan to Secure Border – Reports

Earlier in the day, the Washington Post reported that the Mexican authorities had agreed to Trump administration's "Remain in Mexico" proposal. According to the proposal, migrants who wish to enter the United States for asylum from the southern border will stay in Mexico until the decision on their admission is taken.

However, Olga Sanchez Cordero, senator from the Morena party and future Interior Minister (takes office on December 1) in the government of Mexican President Andres Manuel Lopez Obrador, has denied this media report.