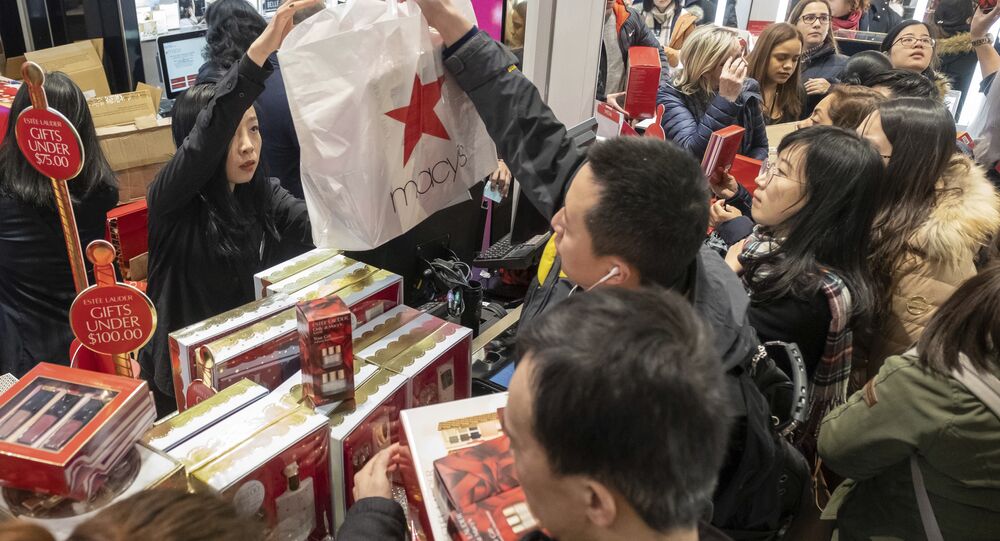 Americans Shove Their Way to Deals on Black Friday (VIDEOS)

Between the holidays of Thanksgiving and Christmas, in which according to Pew, 90 percent of Americans will celebrate the virtues of patience, thankfulness, and good will, lay the unholy rat race that is the Christmas holiday season, inaugurated on that fateful holiday of chaos: Black Friday.

It's called Black Friday because it marks the beginning of the period of the year in which the volume of sales will push company ledgers "into the black," i.e. they'll make a profit for the year.

However, increasingly, Americans are going out Thanksgiving night looking for deals. While traditionally, businesses have been closed on Thanksgiving because of its predominance in America as as family holiday, many stores opened their doors for Black Friday late on Thursday afternoon or evening instead. Adobe Analytics reported Friday that $3.7 billion in business was done during this "Black Thursday" period, including over $1 billion in sales via smart phone.

Huge deals can be had on Black Friday like no other day of the year, which for a day, makes luxury items like electronics, game systems, watches and appliances within financial reach of millions of poorer Americans, who flood the doors of stores in the pre-dawn hours to ensure a good spot in the rush to grab everything in stock.

Because of the spectacle of Black Friday rushes, there's always myriad footage of high-strung Americans pushing, shoving and fighting their way through the mobs of people. It's one of American capitalism's most notorious rituals. One macabre site keeps track of how many people lose their lives in these scrambles or as a consequence of the squabbles they produce. Fortunately, though, no deaths have been registered during this year's holiday season.

Tensions ran high in many places, and some resorted to fists, like this group in a Walmart that had to be broken up amid warnings of "ain't no point in going to jail."

Footage from an unnamed store in the US shows absolute chaos: customers charging through the entryway, trying to hop over crowd control barriers, all while security officers maintain some remote semblance of civilization, with the help of conspicuous submachine guns.

It's the end of the world😂😂 #BlackFriday pic.twitter.com/vBzjQO8J7q

​A much more orderly set of affairs could be found at the historic Macy's department store in on 34th St. in New York, but nonetheless employees there faced a sea of people flooding through the doors and aisles.

​But it's not just America that gets in on the Black Friday action. This video comes from a mall in Port Elizabeth, South Africa.

Scenes at Game Stores at Baywest Mall in Port Elizabeth today during this years #BlackFriday pic.twitter.com/TpiiZGulPu

​Employees at stores across America struggled to control the throngs of customers, shoving and grabbing their way to huge savings.

BLACK FRIDAY: Looking to save some money shopping today? Good luck! Here’s what happened when stores opened at 6 this morning. pic.twitter.com/6OgaOKy5D5

​The worst incident, however, involved gunfire in a mall in Hoover, Alabama, on Thanksgiving night, in which a gunman shot two people, one of whom was a 12-year-old girl, during an argument in the mall's food court. The 21-year-old gunman was shot and killed by a local police officer as he tried to escape, CNN reported.