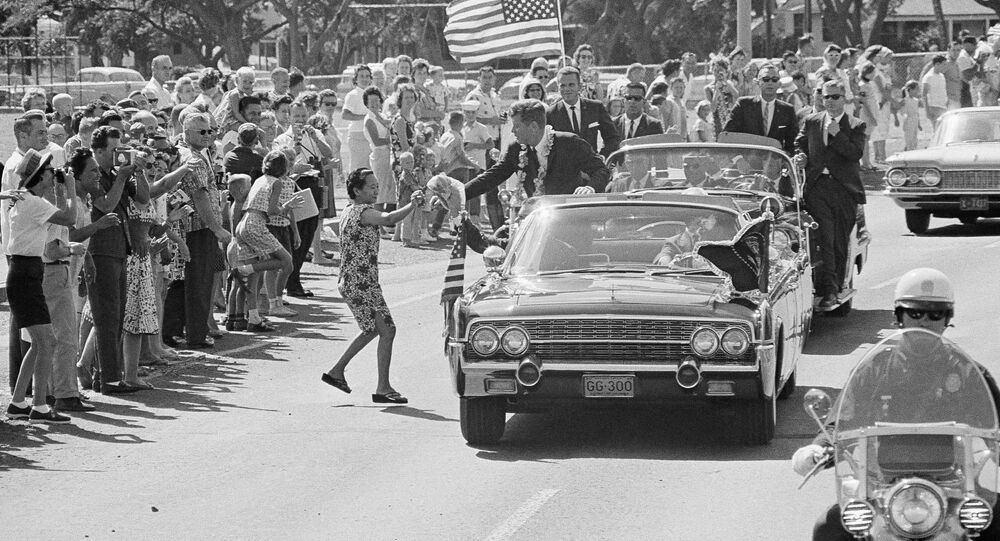 US President John F. Kennedy was shot dead as he was riding in a motorcade in Dallas, Texas on November 22, 1963. The official investigation determined that he was killed by a lone assassin, Lee Harvey Oswald, yet this conclusion remains widely disputed 55 years since his death.

JFK's assassination is considered one of the biggest mysteries of the 20th century. Many still believe that there is not enough credible evidence pointing to Lee Harvey Oswald's guilt — or at least that he did not act alone. The list of potential paymasters includes the mighty CIA, mobsters, and even Kennedy's right-hand man.

The Man Who Killed Oswald

Two days after the assassination, Jack Ruby, a Dallas nightclub owner, fatally shot Lee Harvey Oswald in the basesment of the Dallas police station in front of TV cameras. Ruby explained to the investigators that he killed the sole official suspect out of grief, so that First Lady Jacqueline Kennedy did not have to return to Dallas for Oswald's trial.

The official Warren Commission report of 1964 found that Ruby was not part of a larger conspiracy. It emerged several years later that he was told to come up with this explanation by his lawyer. During his murder trial in 1964, he passed a note to his defence team, which read: "[My first lawyer] Tom Howard told me to say that I shot Oswald so that Caroline and Mrs. Kennedy wouldn't have to come to Dallas to testify, OK?"

Moreover, the House Select Committee on Assassinations claimed in 1979 that "Ruby's shooting of Oswald was not a spontaneous act, in that it involved some premeditation. Similarly, the Committee believed that it was less likely that Ruby entered the police basement without assistance, even though the assistance may have been provided with no knowledge of Ruby's intentions."

When National Archives files were made public in 2017, it emerged that Jack Ruby contacted FBI informant Bob Vanderslice in Dallas hours before JFK's assassination and invited him to 'watch the fireworks'.

© AP Photo
Surrounded by detectives, Lee Harvey Oswald talks to the press as he is led down a corridor of the Dallas police station for another round of questioning in connection with the assassination of US President John F. Kennedy, November 23, 1963.

"He (Vanderslice) was with Jack Ruby and standing at the corner of the Postal Annex Building facing the Texas School Book Depository Building, at the time of the shooting."

Judyth Vary Baker, 75, claims to have had a love affair with Oswald prior to the killing. In her 2010 book, ‘Me & Lee — how I came to know, love and lose Lee Harvey Oswald', she maintained that Oswald was a CIA agent implicated in a conspiracy to assassinate Fidel Castro following the Cuban Missile Crisis.

The CIA's alleged plot was to infect Castro with deadly cancer-causing material, and Baker and Oswald were working in a CIA-sponsored lab. Eventually, she said, the plan failed and the people behind it sought to kill Kennedy as they thought he was ‘no good' for the country. Oswald, she claimed, initially was against the plot but then gave in; he was among the gunmen but missed his shot.

Critics say that Baker did not provide evidence that she was even familiar with Oswald, although she had employment records showing that she worked together with him at a coffee plant in Dallas.

According to a 2003 Gallup poll, some 20% of Americans suspected Lyndon B. Johnson, who served as Vice President under Kennedy, of standing behind his death.

That LBJ sought to replace John Kennedy in his own right was claimed by Madeleine Brown, Lyndon's alleged mistress back in the 1960s. She said that Johnson told her the night before the Dallas killing, "After tomorrow, those Kennedys will never embarrass me again. That's no threat. That's a promise."

However, JFK researcher Dave Perry said that Lyndon Johnson couldn't have attended the party where he allegedly said these words. "That's absolutely not true," Perry said. "A lot of Texans didn't like Johnson — they thought he was a crook — so as a result, they started creating this fiction after the assassination where he wanted Kennedy out so he could be president," Perry said.

According to TV station ABC 7 Chicago, President Kennedy could have never made it to Dallas as two plots sought to target him in Chicago in early November 1963, just weeks before his ill-fated motorcade in Texas.

The first plot is said to have been developed by a Cuban exile, Homer Echevarria, who sought to kill Kennedy during a motorcade from O'Hare Airport to the city. Abraham Bolden, a former JFK Secret Service, is quoted as saying that FBI sabotaged the plan, presumably out of jealousy.

JFK called off the trip to Chicago after security services thwarted a second assassination plan and arrested the suspect. According to the report, ex-marine Thomas Vallee, a right-wing extremist, looked to target JFK during a motorcade and had high-powered rifles and ammo in his car trunk.

READ MORE: Robert Kennedy’s Assassination and How It Changed Politics in America

"I think there would have been an attempt. I think it would've been successful," Bolden said.

Dallas Country District Attorney Craig Watkins gave a new twist to the JFK assassination mystery in 2008 when he released several documents and items related to the killing. They indicated that Kennedy could have fallen victim to a clash between Chicago mafia and his brother Robert, who was at the time US Attorney General and led an 'anti-Mafia crusade'.

The transcript of an October 4 conversation cited Oswald telling Jack Ruby, "the [Mafia] boys in Chicago want to get rid of the Attorney General [Robert Kennedy]…. There is a way to get rid of him without killing him…. I can shoot his brother."

The FBI concluded in a report that the alleged Ruby-Oswald transcript was bogus and was ‘recreated' for authorities.