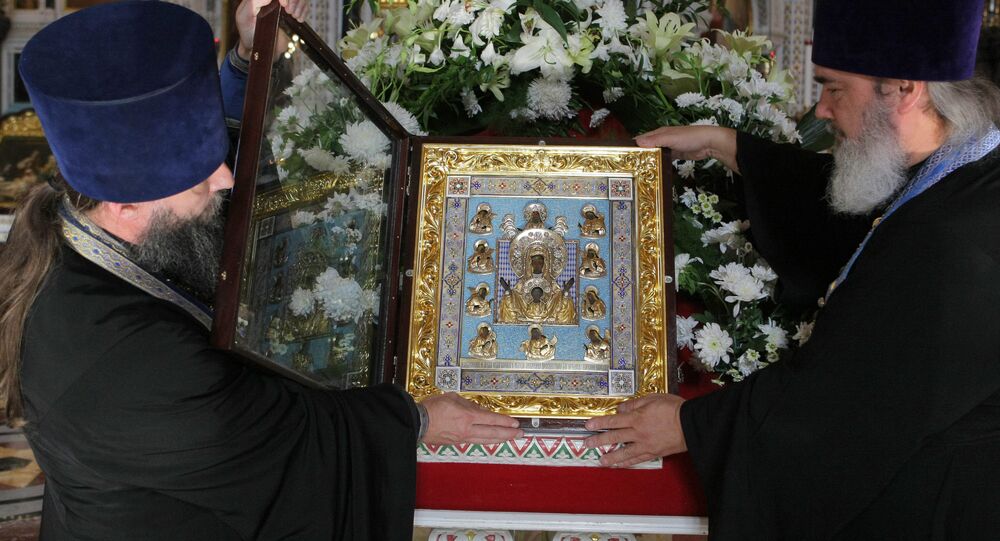 WASHINGTON (Sputnik) - The Kursk Root Icon of the Mother of God, one of the major relics of Russia and the Orthodox world, will arrive in Washington, DC on Thursday, and special religious services will be served at the Russian St. John the Baptist church, the rector of the parish father Viktor Potapov told Sputnik.

"This Thursday will mark the fourth year in a row when the Holy Kursk Root Icon of the Mother of God will be in Washington, DC," Potapov said. "Each year it comes for Thanksgiving."

Potapov explained that the Russian Orthodox Church Outside Russia (ROCOR) considers the Kursk icon as "Odigitria" or the Indicator the Way icon.

CC BY 2.0
Monks of Major US Orthodox Monastery in New York to Vote in Midterms
The relic will stay in Washington, DC until November 30 and will be present during all services at the St. John the Baptist church. Priests will visit sick parishioners who cannot come to the church to give them an opportunity to pray before the icon.

The Kursk Root icon dates back to the 13th century. According to Russian Orthodox Church, a hunter from the city of Rylsk near Kursk came across the icon at a root of a tree in 1295. Legend has it that the hunter picked up the icon and a spring of pure water gushed from the place it lay upon. The hunter built a chapel near the site.

In 2007, ROCOR and the Moscow Patriarchate agreed that the icon would be sent every September to Russia, including in the city of Kursk.

The faithful have attributed numerous miracles to the icon. In the 14th century, when Tartars — who are said to be descendants of Bulgars — came to raid the Kursk Region and cut the icon in two, the two halves grew together, leaving a small trace of the break that is still observable.

Many Russian saints, including St. Seraphim of Sarov and St. John of Shanghai and San Francisco have prayed in front of the icon.

In 1920, the Kursk Root Icon of the Mother of God left Russia as many faithful fled the country following the 1917 Bolshevik Revolution that saw the start of a large-scale persecution of Christians. The icon was moved from place to place, including Serbia and Germany, and was finally taken to the United States.