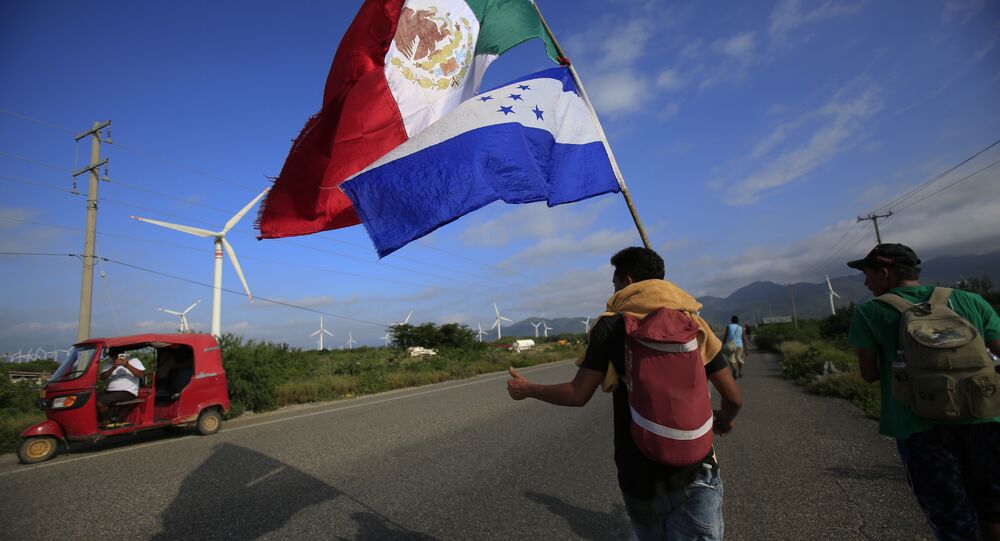 The deployment of about six thousand active troops to the US-Mexican border was prompted by a migrant caravan, which started its trek through Mexico to the US on October 31, just a week before midterm elections. The Trump administration's move was aimed at countering what he called an “invasion” as the migrants were looking for a way into the US.

US Defense Secretary Jim Mattis, who is on his way to visit the troops deployed to the US-Mexican border, described the decision made earlier as "a moral and ethical mission to support" the American border patrol forces, which are opposing the illegal immigration.

"Believe me, we want legal immigration. That's part of what makes America good, but illegal — we're going to carry out the law", he said.

Commenting on the verbal attacks from Trump's detractors concerning the possible compromising of US potential to defend the country from the threats coming from abroad, Jim Mattis has compared the current move with Woodrow Wilson's 1916 decision to use the American troops along the Mexican border (so-called Pancho Villa Expedition) to counter-revolutionary Mexicans invading the US.

"That's over a century ago, and the threat then was Pancho Villa's troops — revolutionaries, raiding across the border into the United States," the former Marine General said.

© East News / Eduardo Verdugo/AP/MXEV115
Trump Administration Moves to Restrict Asylum at US-Mexico Border
Then, Jim Mattis referred to the Department of Justice's lawyers, who had reviewed the move and found it legal, according to The Associated Press.
In late October a caravan of thousands of asylum seekers began moving north from Central America, predominantly Honduras, via Mexico to the US, eager to cross the American border.

Donald Trump, who has a defensive stance regarding the migrant's issues, has decided to deploy a military unit of around six-thousand troops to Mexico. He seeks to strengthen the border amid the migrants' pressure, which he described as an "invasion" of the US, warning migrants that the US Military is "waiting" for them.

The decision was criticized by Trump's detractors, who described it as "a prop to stoke fear and score political points" in the midterm elections.