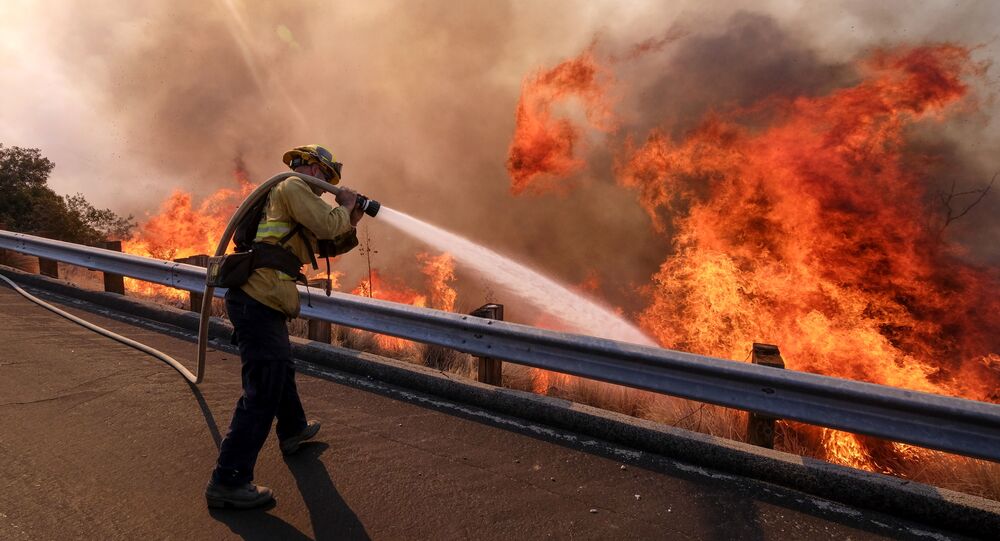 Wildfires engulfed swathes of northern and southern California last week, claiming at least 48 lives, a state record for deaths attributable to such fires. However, some locals fear yet another danger, which seems even less controllable than the killer blazes.

The deadly fires which have raged through California since November 8 have hit a whopping 52,600 hectares (520 sq. km), destroying dozens of houses. Reports on the so-called Woolsey Fire have indicated that it began near Santa Susana, a contaminated nuclear test site.

The Santa Susana Field Laboratory (SSFL), a former nuclear and aeronautical research facility that suffered a long-undisclosed partial nuclear meltdown in 1959, has been named among the sites affected by the Woolsey Fire. Last week, California authorities said in a statement that the fire was moving away from the SSFL site and that it has not caused "any releases of hazardous materials that would pose a risk to people exposed to the smoke."

However, the statement has apparently failed to quell the fears of local activists and green campaigners. Physicians for Social Responsibility (PSR), an NGO advocating environmental justice, claims that the California Department of Toxic Substances Control has long delayed the cleanup of the facility, located some 50 km northwest of Downtown Los Angeles, despite concerns that highly toxic materials could fall on the ground in the form on radioactive ash.

"We know what substances are on the site and how hazardous they are. We're talking about incredibly dangerous radionuclides and toxic chemicals such a trichloroethylene, perchlorate, dioxins and heavy metals. These toxic materials are in the SSFL's soil and vegetation, and when it burns and becomes airborne in smoke and ash, there is real possibility of heightened exposure for area residents," said Dr. Robert Dodge, president of the Los Angeles-based charter of Physicians for Social Responsibility.

Moreover, members of the local community have also been warning of the risks associated with SSFL contamination. Melissa Bumstead, who lives within 20 miles the SSFL, has launched an online petition to urge local authorities to "stop lying" and clean up the area. Her push has racked up over 458,000 signatures so far.

"My 8-year-old daughter had cancer twice. We know 50 other kids in the community who have had cancers, and we've got above-average invasive breast cancer rates here. People who live close to the site have 60 percent higher cancer rates within two miles of the site," she said, claiming that people are also in danger of autoimmune disease and thyroid issues.

She claims that a private investor has hampered the cleanup efforts. "The Boeing Company, who partially owns the site, is proposing that the land be open to families for recreational use, even while the disaster has still not been cleaned up. It is the Department of Toxic Substance Control's job to clean up this mess, but they aren't taking any meaningful action. Instead they released an Environmental Impact Report that proposes to leave vast amounts of the radioactive and carcinogenic waste on site permanently."

Now that the Woolsey Fire has brought health concerns to another level, residents believe that the government has failed to warn them in time.

Please call the DTSC director, Barbara Lee,(916) 322-2198* and tell her that we’re at risk and they’ve failed to warn us. The smoke has the potential for exposure to radioactive and carcinogenic contamination from Santa Susana Field Laboratory, we want that statement immediately!

This was a campaign issue we have been working with Newsom on. Boeing owns the site and has refused a cleanup while 50+ kids have been diagnosed with rare cancers just in the last 3 years. This site is HIGHLY TOXIC. And now we are all breathing it in.

Anyone concerned that some of this ash from the #WoolseyFire could be radioactive since the Rocketdyne Lab/Santa Susana field lab was in the path of this? Has nobody noticed. Not to alarm anyone but that place is toxic and it's blowing right into Calabasas and Malibu.

Meanwhile, some people complain that the matter has not got enough media coverage.

For the love of god why isn’t the city or any news outlet reporting on possible nuclear contaminated ash coming from the Santa Susana site in the #WoolseyFire?! The public has a right to know @LANow @KTLA @LACity @MayorOfLA @LAFD

The Santa Susana Field Laboratory land south of Simi Valley is burning tonight. You won't hear on the news that it is a nuclear waste site — soil there is saturated with radionuclides and a variety of toxic chemicals. Wouldn't want to upset the wealthy in Bell Canyon. Google it.

Don't Breathe and Other Tips to Stay Healthy in California