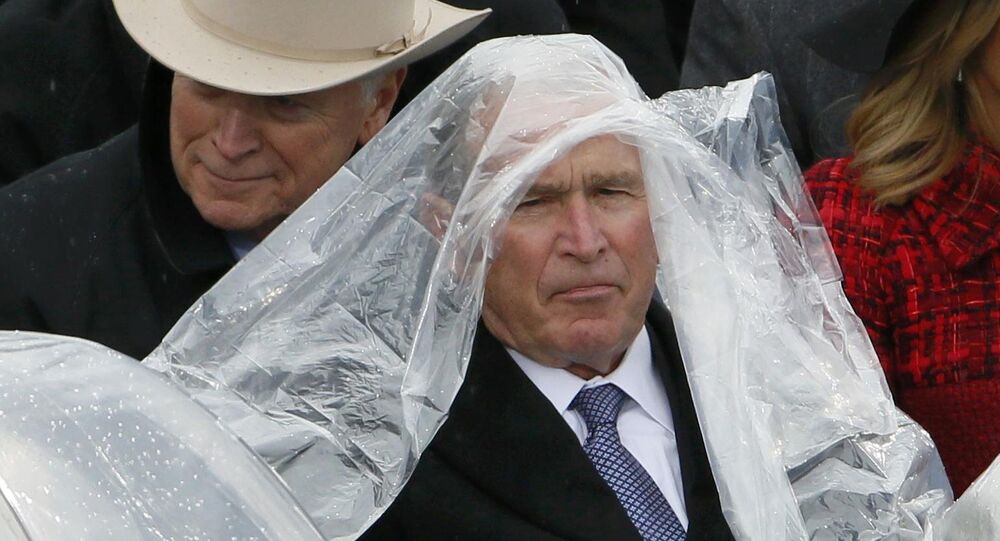 Former US President George W. Bush and his wife, Laura, will receive the Liberty Medal on Sunday in Philadelphia. With the award typically going to leaders "who have strived to secure the blessings of liberty to people around the globe,” more than a few people are baffled at the National Constitution Center’s choice.

© AP Photo / Rustam Nazari
‘Hasn’t Been Smart’: 49 Percent of Americans Call 17-Year Afghan War a Failure
The Bushes will receive the award on November 11, Veterans Day, which in Europe is known as Armistice Day. This year's Armistice Day is a very special anniversary, because it will have been exactly 100 years since the armistice that ended the First World War on the Western Front on November 11, 1918.

It's especially ironic, then, that Bush should be given a medal that typically goes to people who end conflicts or who fight for peace, such as Nelson Mandela and Malala Yousafzai, or overcome prejudice, such as Sandra Day O'Connor, John Lewis and Thurgood Marshall, on a day commemorating the end of what was once called "The War to End All Wars," when Bush's most notorious legacies are two colossal wars in the Middle East and the enormous expansion of the surveillance state in the US.

George Bush is responsible for starting a war and war crimes. Shameful choice for liberty medal.

​Lest it be forgotten, Bush presided over the creation of the US Department of Homeland Security following the September 11, 2001, terrorist attacks, as well as the massive expansion of the Guantanamo Bay detention facility to house suspected terrorists indefinitely under conditions of torture. It was Bush who started the US War in Afghanistan, which just entered its 18th year last month, and who started the US War in Iraq, each of which is estimated to have killed half a million people. Those wars also paved the way for the catastrophic wars in Syria and Libya, the former of which is now in its eighth year.

Praxis Films
Snowden: Privacy in US Still Under Threat After Patriot Act Expired

The USA PATRIOT Act shredded the Fourth Amendment to the US Constitution, which protects citizens against unreasonable searches and seizures, by making large scale illegal wiretapping commonplace and creating conditions under which civil liberties for the vast majority of Americans have become extremely precarious. Bush also presided over the creation of Immigration and Customs Enforcement (ICE), the agency now at the forefront of the growing crisis with the treatment of immigrants and refugees coming from Central and South America, as well as people who have lived in the US for generations.

These facts haven't escaped the scrutiny of the Twitterverse, which voiced its disapproval Friday of the impending award ceremony.

One poster noted how Bush came out of retirement to go to bat for fiercely embattled Supreme Court Justice Brett Kavanaugh during his confirmation hearing in September. During the flurry of sexual misconduct allegations against Kavanaugh that reignited the debate over sexual assault in the US, Bush said of Kavanaugh: "He is a fine husband, father and friend — and a man of the highest integrity. He will make a superb Justice of the Supreme Court of the United States," Politico reported in late September.

George W. Bush is a war criminal — he does not deserve the Liberty Medal and instead should face prosecution at the World Court. It's a disgrace that Joe Biden will be presenting the medal — I can't wait to see him lose to Bernie in the 2020 Democratic primary.

​In perhaps one of the strangest ironies, former Vice President Joe Biden, who served under Democratic President Barack Obama — who was awarded the Nobel Peace Prize only months after taking office basically as a reward for not being Bush — will be delivering to the Bushes their medals on Sunday.

In light of George W. Bush's pivotal role in the confirmation of Supreme Court Justice Brett Kavanaugh, the @constitutionctr giving him the Liberty Medal is a slap in the face to sexual assault victims #SCOTUS #MeToo https://t.co/GoYf7y7o4m

​Of course, some commenters suggested that the medal was already a joke, so it didn't matter that the National Constitution Center was betraying the stated principles the medal represents.

Obviously, but also it's not like a "Liberty Medal" is an actual award that anyone cares about. Liberals have already embraced Bush, now they're just giving him a piece of jewelry https://t.co/6OyAd09YrB

​The medal was first administered in 1989 to Polish trade union leader Lech Walesa, whose activism forced the Polish United Workers Party to open elections to parties outside its popular front bloc, setting in motion a sequence of events that rapidly led to the end of Polish socialism by the end of 1990.