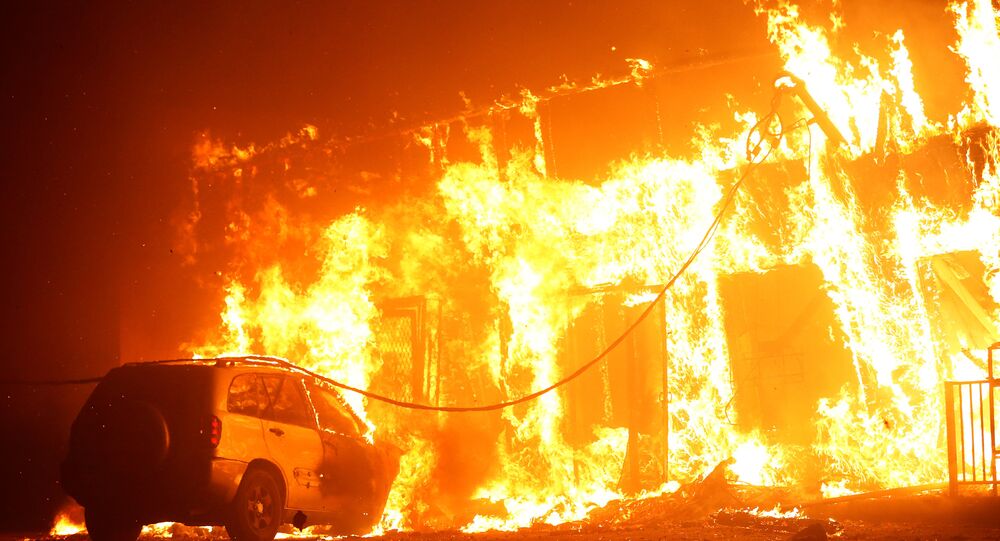 The reality TV star and mother of three shared dramatic footage of burning forests, fire and police vehicles on her Instagram account like many Californians who had to flee the fast-moving blazes. The ongoing danger has prompted the state's governor to declare a state of emergency.

Kanye West's wife Kim Kardashian has told her followers that she had one hour to pack and evacuate their home, calling on her followers to pray that everyone is safe.  In her Instagram stories, she posted a couple of videos from a jet window, showing fires raging below. She also shares a clip of firefighters, rushing down a road with their sirens on, with the caption “Thank you for all that you do for us.”

She concluded her reportage with an ominous skyline snap with fire and smoke blazing on the horizon. The star had to flee her house in a posh suburb of Los Angeles, Calabasas, which was hit like other areas in California, by wildfires.

Kim Kardashian had to evacuate her home last night after a fire started in Calabasas. On her Instagram story, she posted videos of the event. pic.twitter.com/SkJtDDs9A1

​In Southern California, residents of 1,200 homes were evacuated while several communities remain under siege because of two large blazes. Officials expect the fire to burn its way to the ocean.

In Northern California, the entire population of Paradise, 27,000 people, were ordered to evacuate. The fire destroyed or damaged houses and facilities.

It didn’t seem real till I saw this image. You’ll always be my hometown. Goodbye Paradise. May you rest in Paradise. #CampFire pic.twitter.com/L5Bug6jzw1

​"The town is devastated, everything is destroyed. There's nothing much left standing," California Department of Forestry and Fire Protection spokesman Scott Maclean said.

She was literally on the phone with me in this video because I was freaking out over the fire on the other side of town! Pray for paradise #CampFire pic.twitter.com/dOfb8pem4y

my dad just sent me this from Paradise, said he could hear people’s propane tanks blowing up all over town. this does not look good at all, please keep Paradise & all the first responders in your prayers everyone 😓❤️❤️ #CampFire pic.twitter.com/3gyOSBuf17

​In neighboring Chico, a city of about 93,000 people, residents were also ordered to flee as wildfire advanced to its outskirts.
The California Highway Patrol announced Thursday afternoon that it had closed several roads in the area, including Skyway Road, which is the northerly passage out of town, and Highway 70 to the south of the fire.

Photos from my home in Chico. Hoping everyone gets out safe.#CampFire pic.twitter.com/5AWZDGM5NJ

​​Ongoing danger prompted acting Governor Gavin Newsom to declare a state of emergency in the area and request that a federal emergency be declared.

Fire officials warned of fire dangers in many areas of the state, saying low humidity and strong winds were expected to continue.