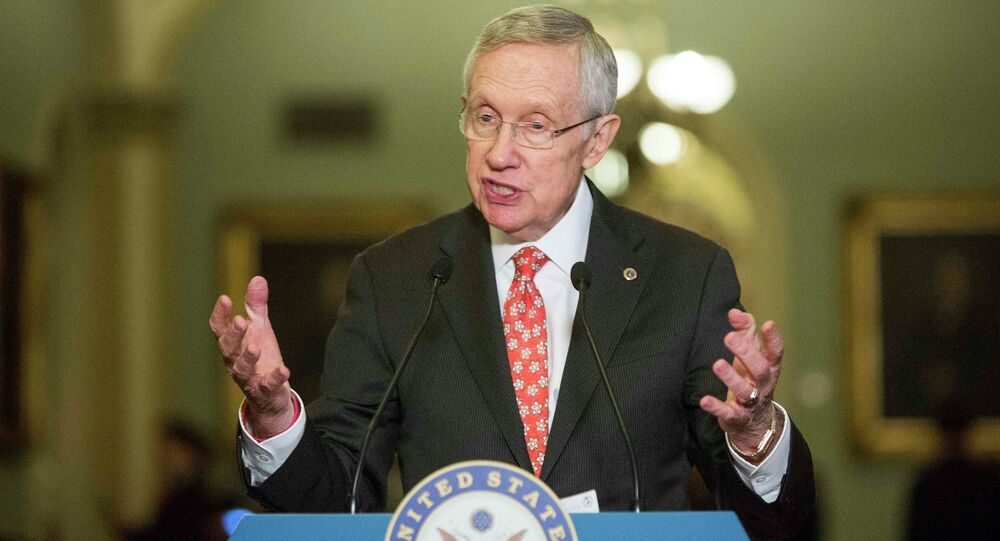 Harry Reid, the former Democratic senator from Nevada and majority leader, was put on the defensive by US President Donald Trump Wednesday when Trump tweeted an embarrassing 1993 video of a Senate debate in which Reid defended the same position Trump now does on naturalization of immigrants.

"That awful bill." That's how Reid's wife, Landra, refers to a proposal he put before the US Senate in 1993. Contrary to his current position, Reid then articulated a belief essentially identical to that being espoused now by Trump, which was leaked by Axios on Monday.

© REUTERS / Carlos Barria
Birthright Citizenship Not Covered by US Constitution, Will End 'One Way or the Other' – Trump

"If making it easy to be an illegal alien isn't enough, how about offering an award for being an illegal immigrant?" Reid said on the Senate floor in 1993 in a video posted on Twitter by Trump Wednesday morning. "No sane country would do that, right? Guess again. If you break our laws by entering this country without permission and give birth to a child, we reward that child with US citizenship and guarantee a full access to all public and social services this society provides — and that's a lot of services. Is it any wonder that two-thirds of the babies born at taxpayer expense at county-run hospitals in Los Angeles are born to illegal alien mothers?"

This, Trump said, came from Reid "when he was sane."

Harry Reid, when he was sane, agreed with us on Birthright Citizenship! pic.twitter.com/ypiE1QWKag

​The video post followed a screed against the principle of birthright citizenship, a right created by the 14th Amendment to the US Constitution in 1868 that gives automatic US citizenship to all persons born on US soil, regardless of their parents' legal status.

On Wednesday, the president wrote that birthright citizenship costs the US billions and is "very unfair" and "will be ended one way or the other," as he offered an explanation as to why the right is not actually granted by the 14th Amendment. "Harry Reid was right in 1993, before he and the Democrats went insane," he continued.

​….Harry Reid was right in 1993, before he and the Democrats went insane and started with the Open Borders (which brings massive Crime) “stuff.” Don’t forget the nasty term Anchor Babies. I will keep our Country safe. This case will be settled by the United States Supreme Court!

​The attack prompted Reid to issue a statement Wednesday clarifying that he long ago changed his mind on the subject and no longer defends the beliefs articulated in the video.

​​"In 1993, around the time Donald Trump was gobbling up tax-free inheritance money from his wealthy father and driving several companies into bankruptcy, I made a mistake," Reid said in a statement. "And in my 36 years in Washington, there is no more valuable lesson I learned than the strength and power of immigrants and no issue and I worked harder on than fixing our broken immigration system," Reid said. "I had the privilege of learning from heroes like Astrid Silva who came to this nation as a little girl and has emerged as a powerful leader."

Fox News noted that Reid's pivot came in 1999, when he apologized for his previous stance shortly after the AFL-CIO labor union, politically influential in his home state of Nevada, changed its position to support birthright citizenship.

Following Trump's assault, other GOP politicians went on the offensive, too, with Republican National Committee Chair Ronna McDaniel tweeting: "But the Democrat leaders of today want to abolish ICE and open our borders." When Democrats held a majority in the US Senate, Reid was the majority leader.

​This wasn't the first time Trump has tried to embarrass a liberal politician by muckraking for instances of them agreeing with his positions, which they now attack. On October 23, Trump tweeted a video, taken slightly out of context, of former US President Barack Obama declaring in 2005 while he was a US Senator representing Illinois that "we simply cannot allow people to pour into the United States undetected, undocumented, unchecked and circumventing the line of people who are waiting patiently, diligently and lawfully to become immigrants into this country."

I agree with President Obama 100%! pic.twitter.com/PI3aW1Zh5Q

​Obama went on in that speech to defend certain legal rights for undocumented immigrants, Fox noted.

‘Not a Birthright’: Defense Chief Says US Must Work for Sub Superiority