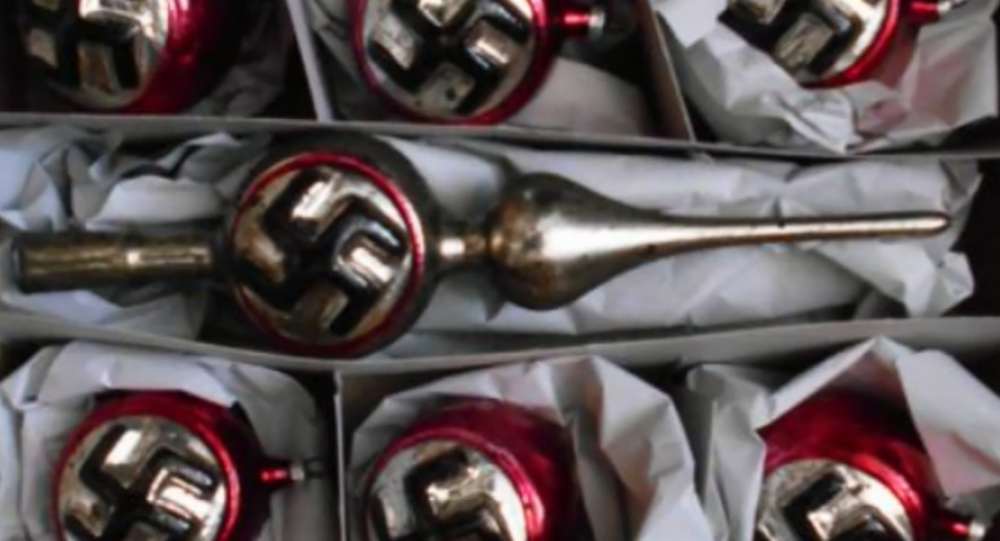 The display of a KKK robe and various WWII-era Christmas ornaments adorned with swastikas for sale at a weekend gun show in Louisville, Kentucky, brought a local convention center under fire this week, with many questioning why such items would even be allowed to be displayed.

The incident took place at the Kentucky Expo Center, which was hosting festivities for National Gun Day on Saturday and Sunday. The vendor at the center of the issue is Walter Kanzler Guns and Militaria from Florida.

Images of the items were shared Sunday on social media by Joe Gerth, a reporter from the Courier-Journal. Gerth later brought the photos to the Kentucky State Fair Board in an effort to shed light on the matter.

​In follow-up tweets, Geth indicated that the robe was being sold for $695 and that the vendor had acquired the piece from an estate sale. "The family found it stashed away in a closet and didn't want it," the reporter told netizens.

"To most correct thinking people $1 is an awfully high figure for something like this. The guy sold a lot of old military stuff including Nazi stuff. To me, things like that ought to be in museums and not homes. I felt dirty just asking him about it," Gerth added.

​Kanzler, the vendor, told the Courier-Journal that the Christmas ornaments are authentic and that he was selling the decorations solely as historic items, not to promote any political views. According to the publication, the prices of the ornaments range between $50 to $750.

"I don't want to suppress history," Kanzler said. "They are original; I have no interest in political statements. I'm not into hate or anything like that. These things are part of history."

Also spotted at the vendor's booth was a white tank top with two red horizontal stripes that featured a swastika patch on the chest.

​Cody Patterson, the director of communications for Kentucky Venues, told Sputnik Wednesday that members of his organization were stunned when they heard about the controversial items being sold. "We were surprised, shocked and appalled to see these materials being sold, because we've never had them for sale on our property," he said.

Patterson explained that Kentucky Venues, which oversees both the Kentucky Exposition Center and the Kentucky International Convention Center, only comprehensively screens vendors when they themselves are hosting an event. For other events for which their facilities are leased, it's up to show managers to draw up contracts with vendors.

Kentucky Venues is governed by the Kentucky State Fair Board, and in 2015 board members passed a resolution that banned the "sale or giveaway" of any merchandise that bears the image of the Confederate flag.

"That's our precedent — that's the only specific ban that we have," Patterson said, adding that he's been asked since the weekend's show why there isn't a ban on Nazi or KKK products. "And I just told them, ‘We've never seen them here.' It's kind of one of those things… you could kind of think it's common sense, but…"

An emergency meeting will be held on November 15 to address the issue at hand. State Fair Board Chairman Mark Lynn told Louisville news station WAVE 3 on Tuesday that he wants to ban Nazi and white supremacist items from being sold at Kentucky Venues' facilities.

"The most upsetting part is what the meaning of these symbols have and to allow those to be sold on Kentucky Venues property when I'm chairman of the board. I really find that offensive to myself as well; it's just not right," the chairman said.

The items went up for sale on the same day that 11 congregants were killed by a gunman at the Tree of Life synagogue in Pittsburgh, Pennsylvania. The sale also followed by just days an attack in which two black shoppers were gunned down outside of a Kroger grocery store in the Bluegrass State. Both incidents are being investigated as hate crimes.