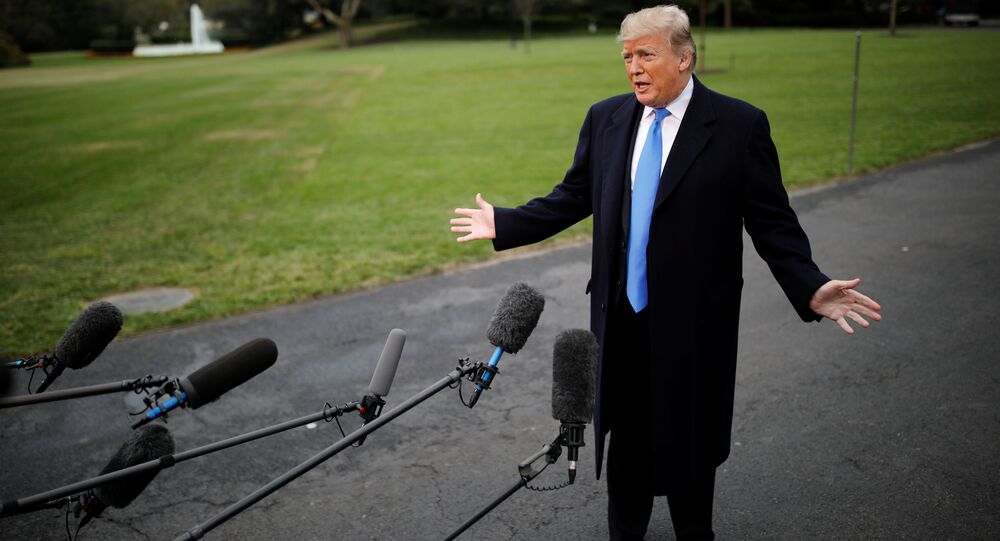 Earlier this week, the president confirmed that he was working on an executive order which would terminate the right of automatic citizenship for the children of illegal immigrants who are born on US soil.

According to the president, the language "subject to the jurisdiction thereof" in section one of the amendment, which states that "All persons born or naturalized in the United States, and subject to the jurisdiction thereof, are citizens of the United States and of the State wherein they reside," indicates the lack of legal validity for birthright citizenship claims for illegal immigrants. "Many legal scholars agree," Trump wrote.

Trump to Migrant Caravan: 'Turn Around!'

In a separate tweet addressing the migrant caravan converging on the US border from Mexico, Trump wrote that "many more troops" are being deployed, and that the US would "NOT let these Caravans, which are also made up of some very bad thugs and gang members," into the US. "TURN AROUND!" Trump urged.

© REUTERS / Joshua Roberts
'It'll Happen': Trump Vows to Terminate US Birthright Citizenship
Trump revealed that he was "in the process" of overturning the 14th amendment to revoke the extension of automatic citizenship to children born to immigrants in the US illegally in a Monday interview. Trump said his advisers had told him that he could make the proposed change through an executive order.

Trump's remarks were greeted with support from Republican lawmakers including Senator Lindsey Graham, who said he would propose legislation in the Senate mirroring the president's executive order. However, Republican Speaker of the House Paul Ryan said that Trump wouldn't be able to end birthright citizenship with an executive order. Vice-President Mike Pence said that the Supreme Court has never ruled on the language of the fourteenth amendment with respect to birthright citizenship and how it applies "to people who are in the country illegally."

On Tuesday, the American Civil Liberties Union called Trump's planned executive order a "blatantly unconstitutional attempt to sow division and fan the flames of anti-immigrant hatred" ahead of next month's midterm elections.

© AFP 2020 / ORLANDO ESTRADA
Blowback: How US' Latin American Policy, Midterms Facilitated Migrant Caravan
Formally, in order for a constitutional amendment to be altered or abolished, a decision to do so must be made by two-thirds of the House and Senate, and then ratified by three quarters of the US states.

Some 5,200 active-duty troops are beiing sent to the US border with Mexico in an operation dubbed 'Operation Faithful Patriot' to bolster border patrol agents' efforts to prepare for a Central American migrant caravan of several thousand people making its way to the border. Republicans have accused their opponents in the US and elsewhere of providing support for the caravan in a bid to influence the upcoming election. President Trump has promised to build "very nice" tent cities for the would-be immigrants, and "hold" migrants who apply for asylum pending court dates.