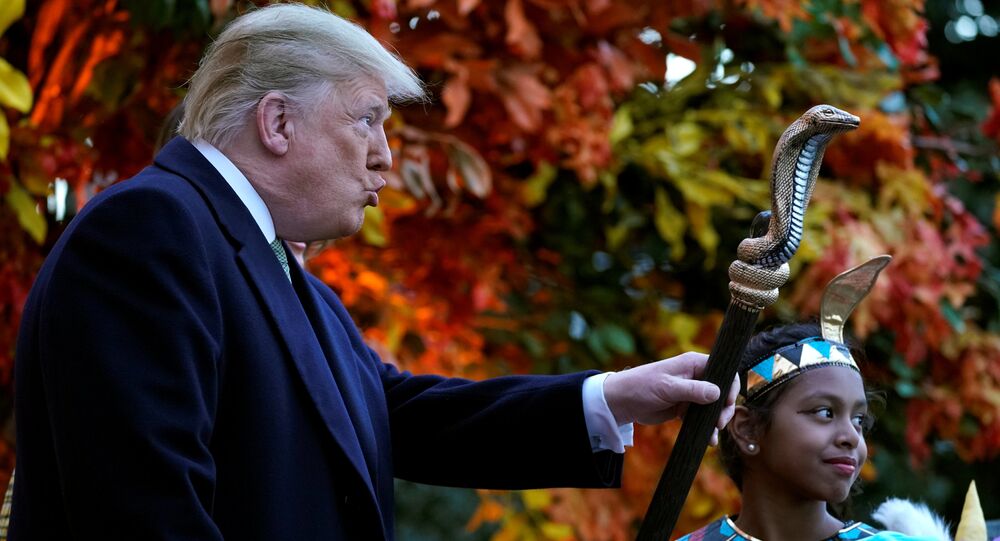 The US president campaigned on immigration reform and the need to curb widespread illegal immigration through the US's border with Mexico, recently calling on the military to move troops to the border to stop a migrant caravan heading to the United States from Central America.

Donald Trump plans to sign an executive order which would remove the right of automatic citizenship for the children of illegal and unauthorized immigrants born on US soil.

"It was always told to me that you needed a constitutional amendment. Guess what? You don't. Number one. Number one you don't need that. Number two, you could definitely do it with an act of Congress. Now, they're saying I can do it just with an executive order," Trump said, speaking to Axios on HBO on Monday.

"We're the only country in the world where a person comes in, has a baby, and the baby is essentially a citizen of the United States for 85 years with all those benefits. It's ridiculous. It's ridiculous, and it has to end," the president said.

Asked whether he was discussing the issue with his advisers, Trump confirmed that he has, and that the executive order is "in the process. It'll happen. With an executive order, that's what you're talking about, right? That's a very interesting [question]. I didn't think anybody knew that but me. I thought I was the only one."

Republican Senator Lindsey Graham commented on Trump's remarks in a series of tweets on Tuesday, saying he would propose legislation mirroring the president's proposed executive order.

In addition, I plan to introduce legislation along the same lines as the proposed executive order from President @realDonaldTrump.

Vice President Mike Pence also commented on the issue, saying that the Supreme Court never specifically ruled on the language of the fourteenth amendment to the Constitution with respect to birthright citizenship and how it applies "to people who are in the country illegally." "What I think the president's made clear is that we are looking at action that would reconsider birthright citizenship," Pence said, speaking to Politico.

In a separate Monday interview, Trump confirmed that the administration was planning to build "very nice" "tent cities" for would-be immigrants from the migrant caravan currently traversing Mexico en route from Central America. Earlier, the president tweeted that he suspected the caravan to contain "many gang members and some very bad people," and urged them to "please go back," warning that "our military is waiting for you."

© REUTERS / Adrees Latif
US Military Moving Equipment to Border as Migrant Caravan Heads Across Mexico - Pentagon Chief
The Pentagon also confirmed on Monday that the US military was sending 5,200 active-duty troops, some of them armed, to the border with Mexico to bolster security ahead of the arrival of the migrant caravan, whose current numbers are estimated between 3,500 to over double that. The military has already started the delivery of jersey barriers and other supplies and equipment to the area.

According to US media, the Mexican border operation is dubbed 'Operation Faithful Patriot', and will see the deployment of some 1,800 troops in Texas, 1,700 in Arizona and 1,500 in California.

During his 2016 presidential campaign, Trump ran on comprehensive immigration reform, including a proposal to build a wall on the Mexican border and make Mexico City pay for it, the mandatory return of all criminal immigrants, penalties for Mexican citizens overstaying their US visas, as well as the end of birthright citizenship. The issue of birthright citizenship has long been a divisive issue, and is presently enshrined under the citizenship clause of the Fourteenth Amendment of the US Constitution.