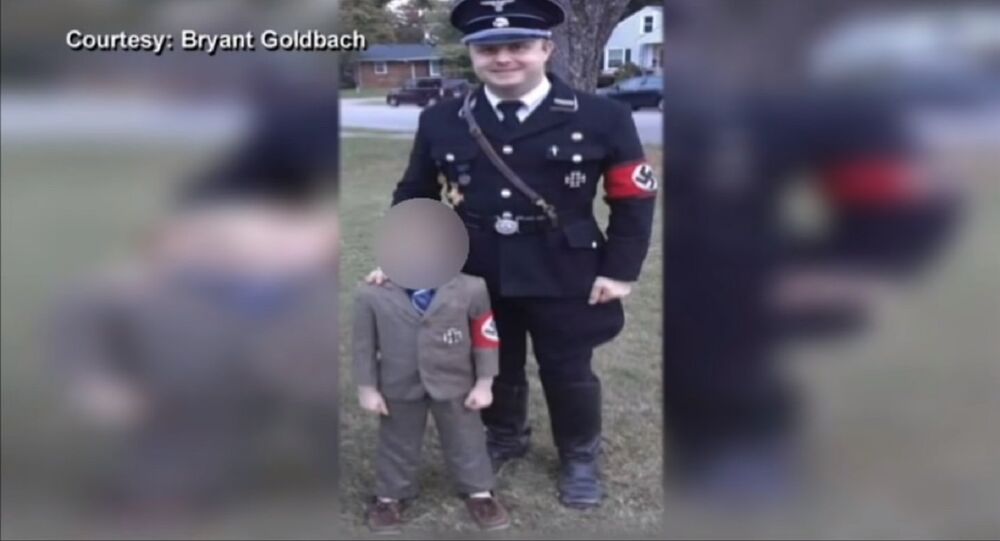 A Kentucky man is facing sharp criticism on social media after dressing up as a Nazi soldier and dressing his son up as Adolf Hitler for Halloween.

Bryant Goldbach and his son were captured on camera on Thursday trick-or-treating in Nazi-style garb, which Goldbach says was for historical purposes.

Area woman Shelby Worden told Tristate Homepage that Nazi Germany should not be romanticized. "With all the hate in the world, it's bringing out more hate from the past. It's showing things that shouldn't be — not necessarily brought up — but romanticized."

Goldbach had made the picture of him and his son — sporting a fake Hitler-style moustache — his profile image on Facebook and hours after trick-or-treating released a statement on Facebook saying his family "loves history" and that "tonight as we walked we saw people dressed as murderers, devils, serial killers, blood and gore of all sorts. Nobody batted an eye. But my little boy and I, dress as historical figures, and it merits people not only making snide remarks, but approaching us and threatening my little 5-year-old boy."

© Sputnik
Should White Kids Dress as the Black Panther for Halloween?

In the post, Goldbach went on to claim that "liberalism is alive and well" and blamed the left for responding negatively to the costumes.

Rabbi Gary Mazo of the Temple Adath B'ai Israel in Indiana said, "The fact that the father apologized is important; the fact he did not know the costumes would be offensive is a very sad reflection on our society."

"As we are learning through Megyn Kelly's words as well, costumes where someone dresses up deliberately to mock someone's race, religion or nationality should be avoided. If the purpose of Halloween is to have fun — bigotry, anti-Semitism and racism are not fun," he added.

Perhaps ironically, the event Goldbach attended with his family where they were confronted for the costumes is named after a major historical event in the genocide of Native Americans. The Halloween tradition of trick-or-treating, in Owensboro, Kentucky, is apparently named "Trail of Treats."

The "Trail of Tears" is the name given to a series of forced expulsions, sometimes called "death marches," of Native Americans from the Southeastern United States to the west following the 1830 Indian Removal Act. Roughly one-quarter of the population from five tribes were relocated, and more than 10,000 are believed to have perished during the exodus.

Goldbach has since made his Facebook page private and changed his profile image to a smiley face with the current flag of Germany superimposed on it.