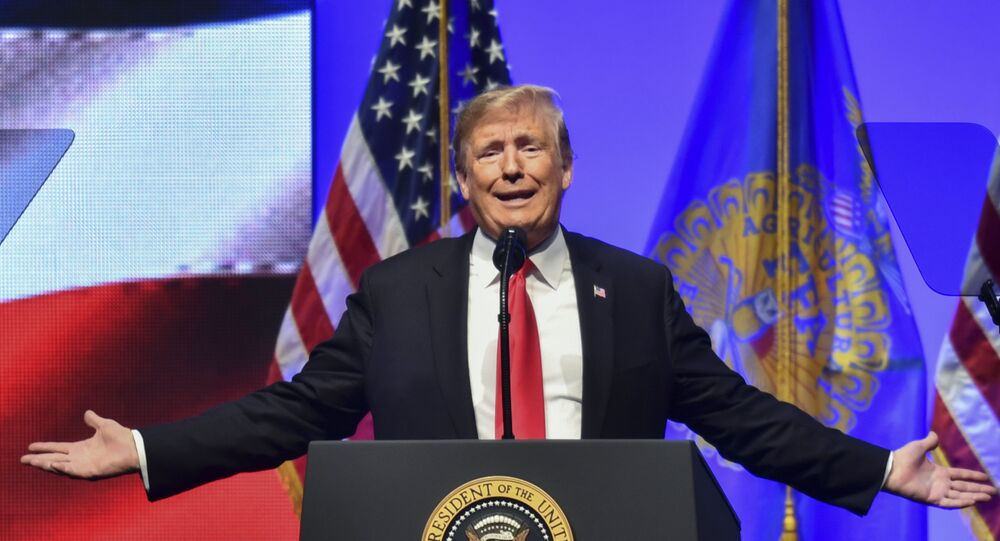 Hours before US President Donald Trump’s Indianapolis speech on Saturday, a gunman opened fire at a synagogue in Pittsburgh, killing 11 people and injuring scores more.

Speaking at the Future Farmers of America (FFA) convention in Indianapolis on Saturday evening, US President Donald Trump joked about calling off the event because of  “a bad hair day” after he refused to cancel a rally following a mass shooting at a synagogue in Pittsburgh earlier in the day.

“By the way, somebody just said, ‘Your hair looks different today.' I said, well I was standing under the wing of Air Force One during a news conference earlier this morning — a very unfortunate news conference. And the wind was blowing and the rain, and I was soaking wet. And that’s what I ended up with today.” Trump said.

Trump jokes that he considered cancelling speech to FFA not b/c of the mass shooting in Pittsburgh, but b/c his hair got wet while talking w/reporters about the shooting.

"At least you know it's mine… I said, 'maybe I should cancel this arrangement b/c I have a bad hair day.'" pic.twitter.com/wLIlqQpENj

While pointing to his coiffure, he continued: “And I said, ‘at least you know it's mine.' And I said 'Maybe, I should cancel this arrangement because I have a bad hair day.' And the bad news, somebody said it actually looks better than it usually does.”

His remarks have brought forth social media users' ire, who lashed out at the president for considering canceling an event because of a ruined hairstyle rather than an anti-Semitic shooting, which has been condemned by the president as “pure evil” and an “assault on all of us”:

Today the president of the United States made clear that he’s much more interested in how his hair looks than in an anti-Semitic massacre in 2018 America.

he is quite simply incomprehensible. it's mindboggling. mass murder at a synagogue on Shabat and he's joking about his hair as a reason to cancel his hatefest.

Others blasted Trump for being vain:

So,so sad that the man who thinks he is our President is so vain that he will cancel an event because of a bad hair day.

Another user wondered if Trump has ever had a good hair day:

Has @realDonaldTrump ever had a good hair day?

While a fellow netizen suggested that the president has been living a “bad hair life”:

Prior to the FFA convention, Trump told reporters he was mulling over canceling a campaign rally in Illinois he had scheduled for later on Saturday, but later changed his mind.

"At first, I was thinking 'I'll cancel' and then I said we can't let evil change our life and change our schedule. Otherwise, we give them too much credit, we make them too important."

READ MORE: Merkel 'Grieves for Those who Died in Pittsburgh' — Statement

Addressing the devastating shooting, President Trump said that the gunman responsible for murdering and wounding multiple people, including police officers, at the synagogue “should get the death penalty”:

He also said that the outcome of the tragic incident would have been different had an armed guard been deployed inside the synagogue.

Eleven people were killed in a shooting at the Tree of Life Synagogue on Wilkins Avenue in Pittsburgh, Pennsylvania, after a perpetrator, who's currently in custody, opened fire while reportedly shouting "all these Jews need to die."