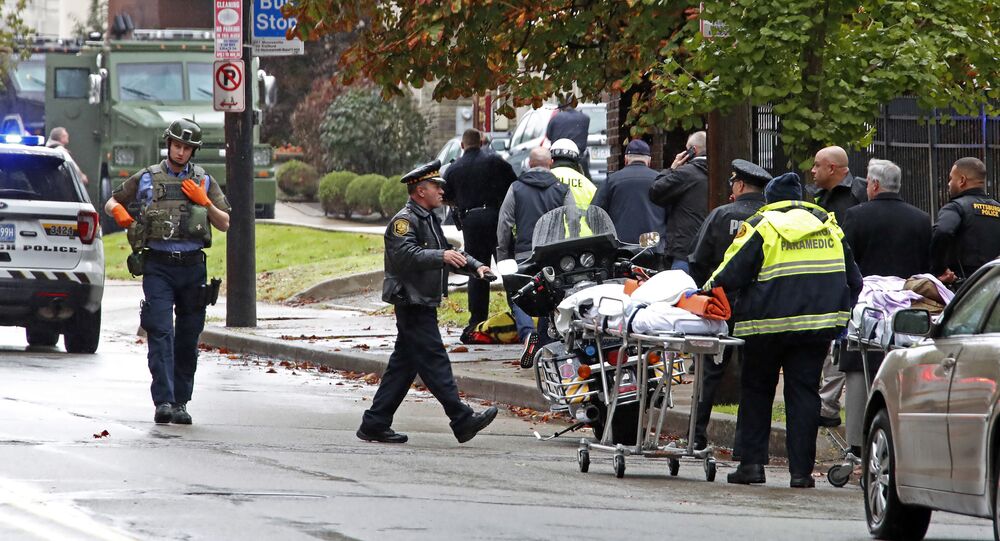 MOSCOW (Sputnik) - Pittsburgh authorities have confirmed that they have detained the suspected gunman who killed 11 and wounded four officers at the Tree of Life synagogue in the state of Pennsylvania.

"There were 11 fatalities as a result of the shooting incident. There were no children. There were additionally six injuries, to include four police officers. That does not include the suspect," an official said at a news briefing.

Authorities confirmed that the suspect in custody had been identified as Robert Bowers. Scott Brady, the US attorney for Pennsylvania's Western District, noted that Bower's actions "represent the worst of humanity." Brady said criminal charges could be filed as early as Saturday.

Earlier reports had detailed the shooter yelling anti-Semitic phrases including "all Jews must die," cited by broadcaster Pittsburgh.cbslocal.com.

Jones stressed that the scene at the Saturday shooting at the Tree of Life Congregation synagogue was "the most horrific crime scene I have seen" in 22 years with the FBI, AP reported.

FBI official Robert Allan Jones said at the briefing that the suspect was armed with what appeared to be an AR-15 assault rifle and at least three handguns, one of which was a Glock.

© REUTERS / JONATHAN ERNST
Trump After Pittsburgh Synagogue Attack: US Should Stiffen Laws on Death Penalty
US President Donald Trump criticized the attack as an act of mass murder and anti-Semitism, noting that the shooting took place at the Tree of Life synagogue during a baby-naming ceremony.

"The vile hate-filled poison of anti-Semitism must be condemned and confronted everywhere and anywhere it appears. There must be no tolerance for anti-Semitism in America," Trump said.

Speaking at a Future Farmers of America convention in Indiana, the president described the attack as evil.

"This wicked act of mass murder is pure evil, hard to believe and, frankly, something that is unimaginable," he said.

Pittsburgh Allegheny Director of Public Safety, Wendell Hissrich, said Saturday that the suspect is in a hospital in fair condition with multiple gunshot wounds.

US Attorney General Jeff Sessions said Saturday that the suspected gunman who committed a deadly attack on the synagogue would face death penalty.

"Today 11 innocent people were suddenly and viciously murdered during religious services and several law enforcement officers were shot … Accordingly, the Department of Justice will file hate crimes and other criminal charges against the defendant, including charges that could lead to the death penalty,” Sessions said in a statement.

Trump told reporters Saturday he would travel to Pittsburgh, but did not offer a time frame. The president also told reporters that injured police officers would recover. US president also slammed the upsurge of anti-Semitism, tweeting that “this evil Anti-Semitic attack is an assault on humanity. It will take all of us working together to extract the poison of Anti-Semitism from our world. We must unite to conquer hate.”

…This evil Anti-Semitic attack is an assault on humanity. It will take all of us working together to extract the poison of Anti-Semitism from our world. We must unite to conquer hate.