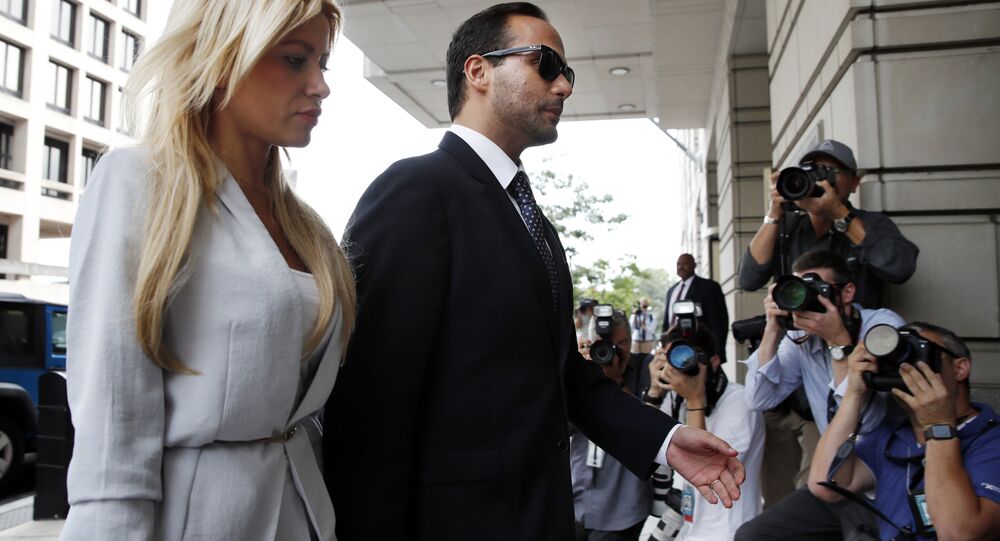 WASHINGTON (Sputnik) – Former Trump campaign aide George Papadopoulos said on Friday that he is considering withdrawing his plea deal with Special Counsel Robert Mueller after receiving information that he was likely framed in a Western intelligence operation involving the FBI and Australia in the closing days of the Obama administration.

Papadopoulos received a 14 day jail sentence in September in exchange for agreeing to cooperate with Special Counsel Robert Mueller’s probe of alleged Russian interference in the 2016 presidential election.

Papadopoulos said in an interview with Fox News on Friday that his change of heart is based on information revealed during a closed-door session with congressional investigators on Thursday.

© AP Photo / Andrew Harnik
Trump's Legal Team Preparing Answers for Mueller's Russiagate Probe - Reports
“Given certain information that I learned yesterday that I can’t publicly disclosed right now, I’m actually even considering withdrawing my agreement I’ve come to with the government,” he said in the interview.

Papadopoulos played a crucial role in the July 2016 FBI decision to open an investigation of possible collusion between the Trump campaign and Russian intelligence, according to the conventional and widely reported narrative of the Mueller probe.

But Papadopoulos’ comments in Friday’s interview, if confirmed, would overturn that narrative by placing an FBI informant – not a Russian spy — as the source of gossip that Russia had obtained former Secretary of State Hillary Clinton’s emails.

In May 2016, Papadopoulos explained, he was working with Israel to find buyers in Greece for newly discovered Israeli oil deposits when he was contacted by a Joseph Mifsud, a Maltese professor, who subsequently told Papadopoulos that the Russians had obtained Clinton’s emails.

© Flickr / Bill Walsh
FBI Planned ‘Media Leak Strategy’ before Trump-Russia ‘Evidence’ Sent to Washington Post
Papadopoulos said that the contact with Mifsud had been arranged through a company that Papadopoulos had previously worked for – a company that he recently discovered “is some sort of Western intelligence front group.”

Moreover, Mifsud’s lawyer recently went public with claims that Mifsud was not a Russian agent – as widely reported in the media —  but was working at the “behest of the FBI,” Mifsud explained. “Unless his lawyer is slandering his client and he’s awaiting a massive lawsuit for libel, I’m not sure that he was lying.”

A week or so after the meeting with Mifsud, Papadopoulos was approached by former Australian Foreign Minister Alexander Downer, then his nation's ambassador to the UK.

“I don’t remember ever talking to Alexander Downer about emails but let’s assume that’s what happened,” Papadopoulos said. “It seems completely suspicious that a week or so after Joseph Mifsud drops this information on me, unsolicited, then Alexander Downer wants to figure out information on this particular topic. It just seems that it was some sort of sting operation gone bad.”

Downer reportedly taped the conversation and turned the material over to the FBI in July, two months later. In January 2017, after Trump had been elected president, the FBI first interviewed Papadopoulos

© CC0 / The White House
Trump Says Reports About China, Russia Wiring His Cellphones 'Soooo Wrong'
Papadopoulos indicated that he made a mistake by agreeing to plead guilty to a charge of lying to the FBI, which is why he has hired new counsel and is discussing options, including withdrawing from the plea agreement.

“All my contacts were in completely in the Middle East, in Israel in particular, and Europe,” he said. “I had absolutely no contacts in Russia… How on Earth could a man like me be at the center of a Russian conspiracy unless I was completely framed by Western intelligence.”

He said that he wants to tell all in public setting. Russia has repeatedly denied allegations of election meddling, insisting that it did not interfere in the 2016 vote.

FBI Says China, Not Russia, 'Most Significant' Intelligence Threat to US