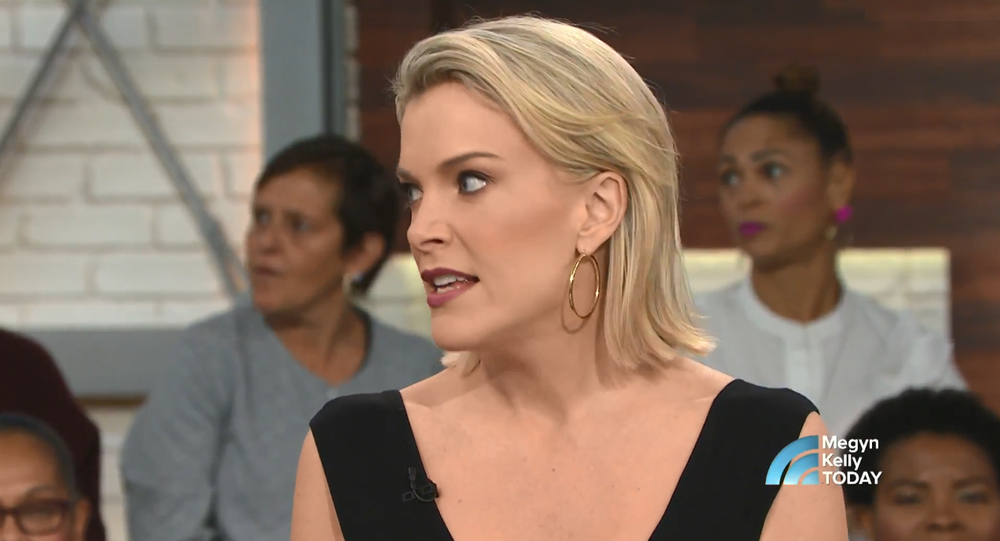 NBC host Megyn Kelly was forced to unring a few bells Tuesday after she adamantly defended the right of white Halloween revelers to wear blackface costumes. Following a reaming out by social media, she apologized hours later, sort of.

On her show "Megyn Kelly Today" on Tuesday, the former Fox News host and defender of the idea that both Jesus and Santa Claus are white once again found herself in hot water for having a racial blind spot.

Megyn Kelly wonders what the big deal is about blackface pic.twitter.com/07yvYDuAYe

"Back when I was a kid, that was OK, as long as you were dressing up as like a character," she claimed, trying to shore up her position by referencing TV personality Luann de Lesseps wearing darker makeup during a premiere of "The Real Housewives of New York" earlier this year, in which she dressed as singer Diana Ross.

Like de Lesseps, Kelly drew immediate criticism, first from her guests and then from social media. Guests Jacob Soboroff, an NBC reporter, pointed out that de Lesseps' impersonation "sounds a little racist to me," and Jenna Bush Hager, daughter of former US President George W. Bush, also said she thought it sounded racist.

Kelly, failing to take the hint, doubled down by quipping, "I can't keep up with the number of people that we're offending just by being normal people."

When Megyn Kelly shows up to the Halloween party in blackface pic.twitter.com/IiiuIoG5kg

Really? I’m a lot older than a Megyn Kelly and blackface was never acceptable. Never. Guess she’s from a different kind of neighborhood than the one I grew up in.

​Some people took a constructive approach, educating both Kelly and others responding to the trending topic on Twitter.

ugh reminder to every white person (@megynkelly) that blackface is racist no matter what you thought when you were a kid. Blackface is much more than just black makeup. Historically, blackface was used to reinforce the idea that African Americans were inferior in every way.

​Some brought up her career as a journalist and found ironic juxtaposition between that and her apparent ignorance of the history of the topic at hand.

1 — @megynkelly you're supposed to be a journalist. An educated one at that. A simple research into the history of blackface and this country's history of treatment of African Americans and instead of asking that question you could be answering and educating others. pic.twitter.com/pZ6dZSGyRI

​Others, however, felt that the issue was a deeper one, deriving from Kelly's political pedigree.

Re: your blackface apology

I can explain all of this in a whirl:
You can take the girl out of Fox
But not the Fox out of the girl.

​By Tuesday afternoon, Kelly had responded to the criticisms with an email to her coworkers in which she said that "listening carefully to other points of view" was "leading me to rethink my own views."

​"When we had the roundtable discussion earlier today about the controversy of making your face look like a different race as part of a Halloween costume, I suggested that this seemed okay if done as part of this holiday where people have the chance to make themselves look like others," Kelly continued. "The iconic Diana Ross came up as an example. To me, I thought, why would it be controversial for someone dressing up as Diana Ross to make herself look like this amazing woman as a way of honoring and respecting her?"

"I realize now that such behavior is indeed wrong, and I am sorry. The history of blackface in our culture is abhorrent; the wounds too deep," she said.

However, she wasn't yet done. "I've never been a ‘pc' [politically correct] kind of person — but I understand that we do need to be more sensitive in this day and age. Particularly on race and ethnicity issues which, far from being healed, have been exacerbated in our politics over the past year. This is a time for more understanding, love, sensitivity and honor, and I want to be part of that. I look forward to continuing that discussion."

That didn't stop Twitter, though, which found her apology disingenuous at best.

Megyn Kelly at 7am: What's wrong with blackface? I think it's great!

Megyn Kelly at noon: I totally understand how racist blackface is. pic.twitter.com/lttzVz0KNP

​NBC hasn't yet released a comment about the incident.