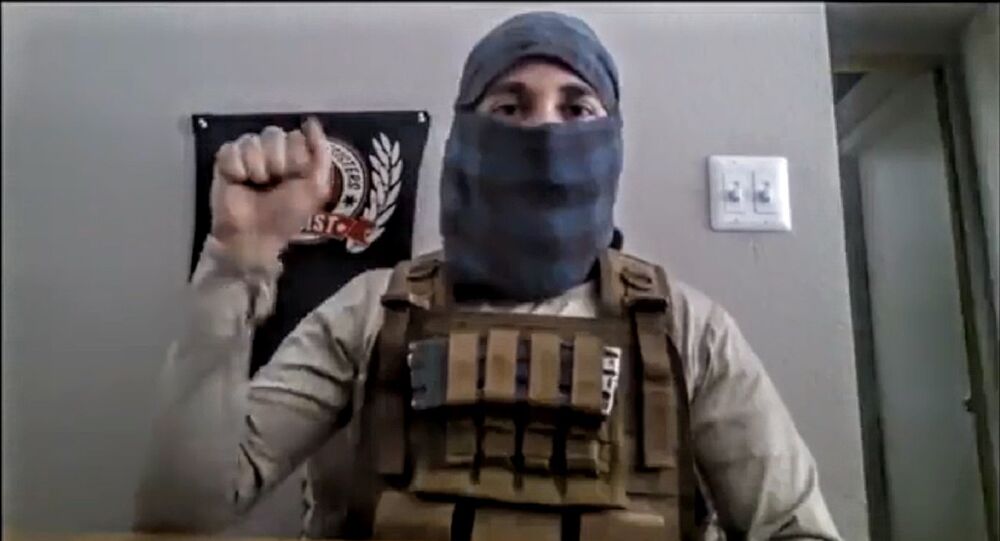 Dozens of people showed to a sporting goods store in Gastonia, North Carolina, expecting to face off with self-proclaimed “antifa” protesters on Saturday. Confrontations between the sides failed to materialize, however, as the antifa Facebook page behind the event was fake, and so was the protest.

It all started on October 14, when a Facebook page called "Gaston County Antifa" made a post announcing a fake protest.

The post got a lot of attention from people who believe the page to be run by legitimate "antifa." Antifa is short for "antifascist" and is not a formal organization. It is known for opposing far-right groups such as the Ku Klux Klan, neo-Nazis and other groups sympathetic to fascism such as the Proud Boys.

"We will protest in front of Gander Mtn in Gastonia on Saturday October 20th at 10:00 am," the post read, announcing the location of the protest as a local sporting goods store. "You will stand down! We have brothers from at least ten states coming here," the post continued. "On the agenda is getting a petition to remove that Nazi statue at the Gaston County Courthouse and recruiting new members."

It isn't clear what the store has to do with the monument, but that's just one of many facets of this story that make very little sense.

The Gaston County Courthouse does not, in fact, have a Nazi statue but instead a Confederate one.

The "antifa" warned that they had "#Resist stickers. if you have a Nazi Trump or Confederate sticker we can cover those up."

The page's profile picture features a man in tactical gear wearing a mask. A large belly protrudes from between his pants and shirt.

The first post on the page was made in mid-August. As the group picked up steam, online trolls opposed to antifa bombarded them with messages. Gaston County Antifa would then share those messages with the comment: "We will not let NAZI haters deter our protests and mission."

One of the group's posts features a picture of a woman holding a sign that says "we are coming away to take away your guns." The caption on the post, written by the fake page, says, "We will disarm the Trump Nazi supporters by lobbying and protesting in your face."

Another picture features a small group of young white men who are "ready to punch any Nazi Trump supporter."

The page has published two videos — one just a day before the fake rally announcement and another the day of.

The first features a young, doe-eyed man with a plaid mask over his face telling viewers that "we got a bunch of stickers in."

"We got a couple thousand of these, probably 500 or so. So if you're driving around, see a car and you have some sort of Nazi sticker on it, like a Trump sticker… if you have some kind of sticker like that on your car and I see it, I'm gonna walk up, and I'm gonna put one of these stickers just right over top of it."

The man spends the remainder of the video talking about stickers and concludes by holding his fist up and saying "resist."

The second video — posted just 25 minutes prior to the post announcing the fake rally on October 20, features the same speaker in the same mask, but this time wearing military-style, tactical gear. "There's something I think we can all agree with. I think it's time that we have the government stop funding the NRA," the speaker begins, referring to the National Rifle Association, which is not funded by the government but it is on occasion contracted by the government to provide services, such as weapons training.

"The NRA — they're basically a terrorist organization; you can look it up on Google too," he says. "If you want to have fun shooting, like, assault rifles and machine guns, then you can just go be a Marine soldier or something… then you can shoot stuff and have fun and be a Nazi, but you don't need an assault rifle if you don't do that."

He goes on to say that the NRA has not been needed since "like the 1800s when we were fighting the civil war with the Britons."

Despite the many absurdities in the posts from Gaston County Antifa, a good number of people showed up to demonstrate in front of the store with pro-Trump, American and Confederate flags.

Antifa and Fascism in an Age of False Equivalences