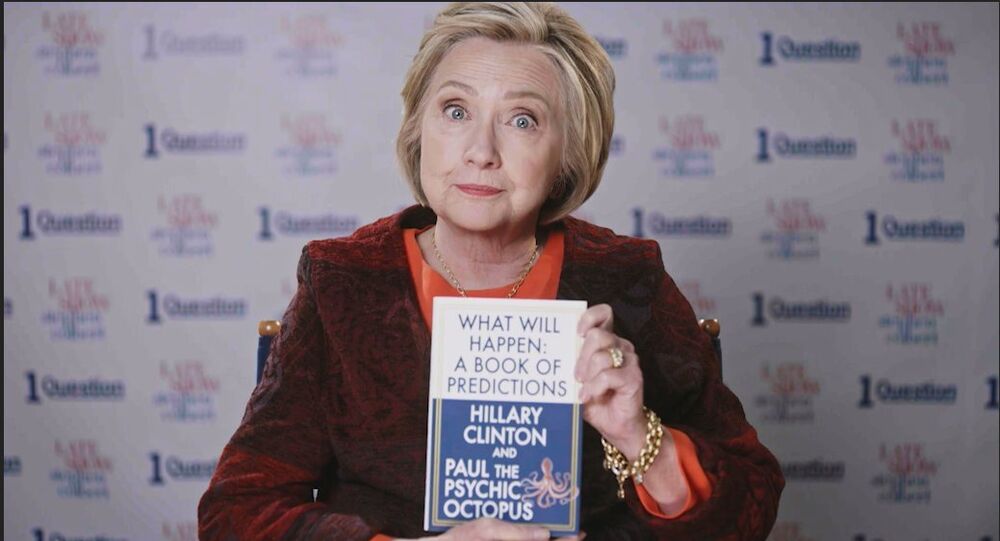 During her appearance on “The Late Show With Stephen Colbert,” the 2016 Democratic presidential nominee, Hillary Clinton, was supposed to answer questions from staff members.

Host Stephen Colbert gave his “excited” staff members a chance to ask a single question to former Secretary of State Hillary Clinton as part of a “Just One Question” segment of The Late Show on Friday.

The questions, as well as the answers, however, were deemed by many users to be “painfully scripted”: one of the employees wondered if Clinton preferred Dwayne “The Rock” Johnson or Vin Diesel, thus giving her a change to show off her knowledge about the fictional characters of the “Fast and Furious” movie.

It didn’t take her long to come up with an extended answer:

“What a tough question. Boy, the ‘Fast and Furious’ movies proved that both are masters of high-octane action,” she said, drawing the audience’s laughter.

© REUTERS / Lucy Nicholson
Hillary Says Clinton Was ‘Absolutely’ Right to Not Resign Over Lewinsky Scandal
“And while ‘The Rock’ is an indispensable part of the later films, Vin Diesel is really the heart at the center of the Toretto family, and in the end, everyone is better off to look past what divides them and work together. You know, I like to say, stronger together,” she added, in an apparent allusion to a book she had co-written with her former running mate Senator Tim Kaine (D-VA), entitled “Stronger Together.”

Other staffers appeared to ask her questions such as “I can’t find my keys. Do you have any idea where they are?” or “What’s the name of that guy? I can’t remember his name, but, you know, the guy, he’s so good in that thing!”

Clinton found answers to both questions without any trouble – the keys were somewhere under her chair, and the “guy” was the three-time Emmy winner, Tony Shalhoub.

More fake news! Here ms Clinton, here are the safe questions you asked for. Now go give us some scripted answers to look young and hip. LATE SHOW you have become a disgrace

Scripted…….bet that took a really crafty team to do that. Smh….

Another writer asked Donald Trump’s rival: “Do you think the Democrats have a chance of taking back the White House in the next election?”

Hillary replied by joking that she didn’t “want to make any predictions about 2020” because she was saving that insight for her upcoming book “What Will Happen: a Book of Predictions: Hillary Clinton and Paul the Psychic Octopus.”

Hillary's new book:
"What Will Happen: A Book of Predictions: Hillary Clinton and Paul the Psychic Octopus."

I can tell you Hillary what will happen without reading your book. You're going to lose.

© REUTERS / Carlos Barria
‘Crashing the Party’: GOP Rips Hillary Clinton’s Car Accident (VIDEO)
Viewers of the show have wondered if she intends to run for president in two years following two defeats, and have been leaving tons of comments on YouTube, such as: “Oh my God, please, say she’s not running!” or “She’s trying to stay relevant till 2020,” and “Go away!”

Earlier this week, one of Clinton’s former political aides, Philippe Reines, told Politico that there was a chance she would take part in the presidential race for the third time.

The first time Hillary Clinton lost to Barack Obama in the 2008 Democratic primaries, and the second time was her defeat as the Democratic presidential candidate to her Republican rival Donald Trump in the 2016 election. Even though she won the popular vote, Trump gained the 270 electoral votes needed to become president of the United States.