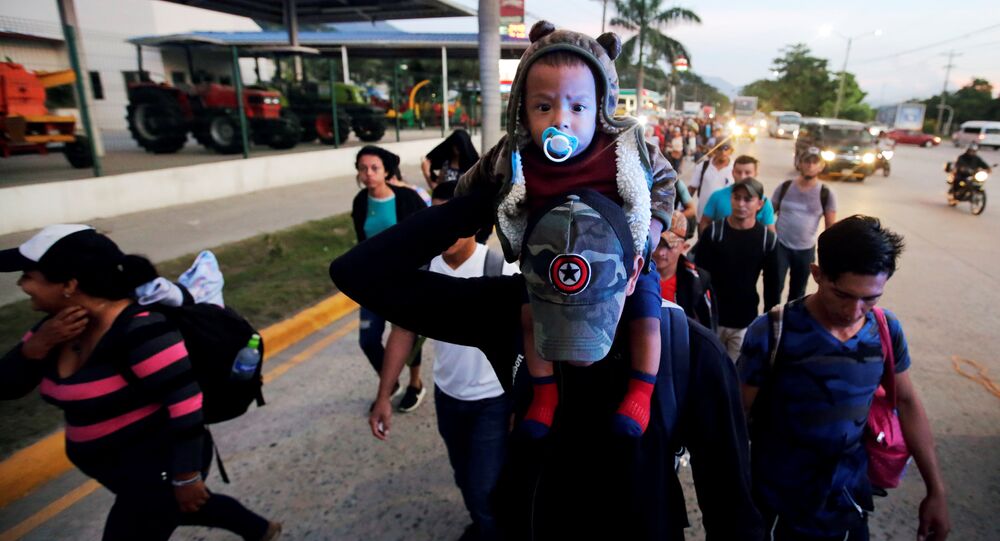 The US president has tweeted that he has warned Honduras, Guatemala and El Salvador that Washington will stop financial support if a caravan consisting of nearly 2,000 migrants from Honduras isn't stopped.

The US president’s remarks come amid reports that there is a migrant caravan of around 1,600 people who have started the journey from Honduras toward Guatemala aiming to reach the US-Mexican border in order to escape poverty and violence in their home country.

“There's a misery and a violence that is overwhelming people,” an organizer with the group, Dunia Montoya, told The Associated Press on Monday. “People no longer have faith in this country and they are fleeing.”

The Honduran Ministry of Foreign Affairs and International Cooperation urged citizens to stop participating in the caravan as it could put their lives at risk. In a Tuesday statement, the ministry said that most of the migrants had been tricked by false promises that Mexico would allow their passage and the United States would grant them asylum.

© AP Photo / Eric Gay, File
Trump Threatens to Cut Aid to Honduras if Caravan of Migrants Headed Toward US Not Stopped
Guatemala's Ministry of Foreign Affairs said that it would help the migrants currently in their country. The statement from the ministry noted that officials would take the necessary measures to "identify and document those who had entered Guatemalan territory illegally in order to regulate their migratory situation."

Mexican authorities have also said migrants who did not comply with legal requirements to enter will be denied permission to cross the Mexican border.

US Vice President Mike Pence said on Twitter that he had spoken to Honduran President Juan Orlando Hernandez and specifically warned him that there will be “no more aid if the caravan is not stopped.” Over the previous fiscal year the US gave about $248 million in aid to Guatemala, $175 million to Honduras, and $115 million to El Salvador.