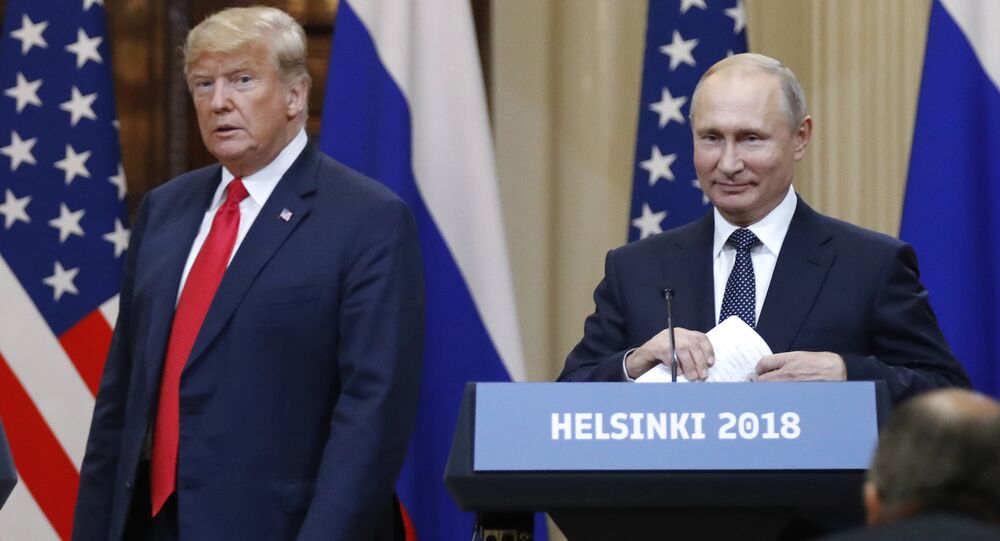 US President Donald Trump told Fox Business host Trish Regan that the Special Counsel probe into potential collusion between his campaign and the Russian Federation plays into the hand of Russian President Vladimir Putin on Tuesday night.

"They played right into their hands because if they want to sow — they use the word ‘sow' chaos — they got it for nothing," he said, going on to note "They like to 'sow' chaos, a word from Old English."

Trump went on call himself "tough" on Russia. "I gave weapons to Ukraine, Obama gave them pillows," Trump said.

Asked about Attorney General Jeff Sessions and the special counsel probe into collusion, Trump called the investigation "witch hunt," a "con job," and more. He said that many Democrats don't believe the hype either. "They wink at me," Trump said.

"Our Justice Department and FBI played right into their hands with this stupid investigation," the president said.

Asked why he wasn't "tougher" on Putin during his closed-door meeting with him in Helsinki, Finland in July, Trump said "they want me to go up and have a boxing match with him on stage. I was nice to him."

"This stupid investigation hurts us from having a good relationship [with Russia.] Don't forget, we're a great nuclear power, but so are they," Trump said.

Trump went on to argue that Obama had advanced notice of alleged Russian attempts to meddle in the 2016 elections in September. "You know what he did? nothing. You know why? Because he thought Hillary Clinton was going to win and he didn't want to do anything to upset that," Trump said.

Earlier in the interview, Trump discussed the economy, picked a few bones with the Jerome Powell, the head of the US Federal Reserve and invoked defense deals with Saudi Arabia when pressed on the alleged killing of Washington Post journalist Jamal Khashoggi, arguing that "we'd be hurting ourselves" if the US canceled the sales.