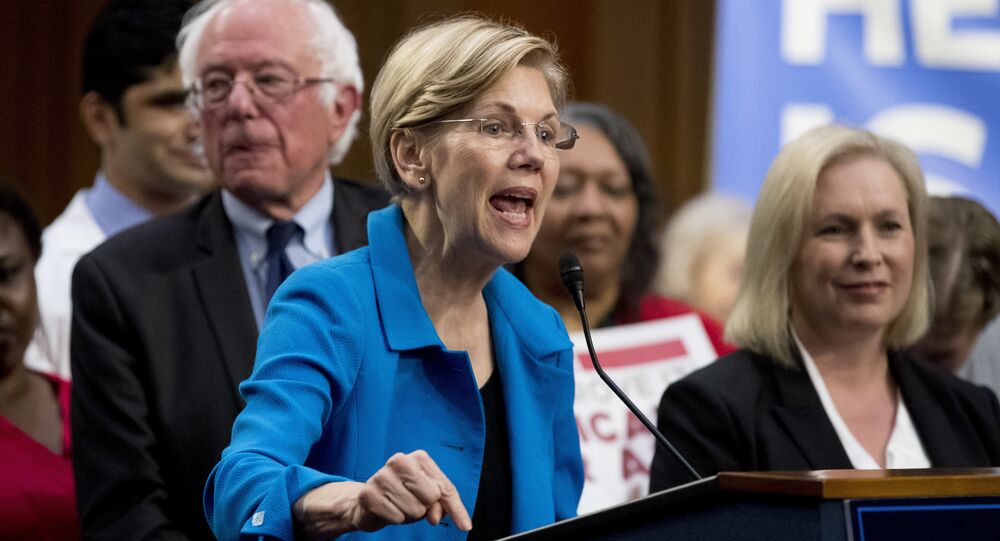 Warren Proves Native Descent, Trump Denies Promising $1M to Charity if She Did

Massachusetts Senator Elizabeth Warren has for years faced criticism about her nebulous claims of indigenous heritage, including mockery by US President Donald Trump, who calls her “Pocahontas.” However, now that Warren’s got DNA results in hand, Trump claims he doesn’t remember promising to give $1 million to charity if she proved her background.

It first emerged in 2012, when Warren was in the running for US Senate, that she had listed herself as Native American in the Association of American Law Schools directory and that Harvard Law School had touted her as being Native while a professor there. Her opponent, Republican Chuck Brown, used the listing as evidence to argue that Warren had fudged her heritage in order to further her career.

Warren managed to parry Brown's attacks, denying she had lied about her heritage but admitting she didn't have documentation to prove it, either. "As a kid, I never asked my mom for documentation when she talked about our Native American heritage. What kid would? But I knew my father's family didn't like that she was part Cherokee and part Delaware, so my parents had to elope," she said at the time, CNN reported.

Warren, an outspoken liberal Democrat who's long attracted the ire of conservatives, fell into Trump's crosshairs on the 2016 campaign trail. The real estate mogul revived the claims of false ancestry, giving her the nickname "Pocahontas," alongside nicknames of his other opponents such as "Lyin' Ted Cruz" and "Crooked Hillary Clinton."

Ironically, while the president-to-be might have intended to mock Warren, the name he picked is somewhat fitting: the Powhatan girl known as Pocahontas was really named Matoaka; "Pocahontas" was a nickname that meant something akin to "little hellion."

Trump's mockery reached a peak in July 2018, when he offered an apology to the real Pocahontas, but refused one to "the fake Pocahontas," meaning Warren. During a Montana rally, the president promised to give her a DNA test kit if they ever met at a political debate, saying if her results turned up positive for Native American ancestry, he'd give "a million dollars to your favorite charity, paid for by Trump, if you take the test and it shows you're an Indian."​

The other boot fell on October 10 when Warren released a report of a test performed by Carlos D. Bustamante, a Stanford University professor and "famous geneticist," as Warren says on her Twitter account. According to the document, "the results strongly support the existence of an unadmixed Native American ancestor in the individual's pedigree, likely in the range of 6-10 generations ago."

On Monday, Trump was asked for his reaction to Warren's revelation, to which he responded, "Who cares?"

When pressed about his $1 million pledge, Trump told reporters, "I didn't say that. You'd better read it again."

Warren called on Trump on Twitter Monday to donate the $1 million to the National Indigenous Women's Resource Center (NIWRC), saying, "NIWRC is a nonprofit working to protect Native women from violence. More than half of all Native women have experienced sexual violence, and the majority of violent crimes against Native Americans are perpetrated by non-Natives."

NIWRC is a nonprofit working to protect Native women from violence. More than half of all Native women have experienced sexual violence, and the majority of violent crimes against Native Americans are perpetrated by non-Natives.

Send them your $1M check, @realDonaldTrump.

​It's also worth noting that the real Pocahontas was kidnapped and forced to marry English tobacco planter John Rolfe in 1614 as part of a peace deal between the English settlers in Jamestown, Virginia, and Tsenacommacah, an alliance of Algonquian tribes united by Pocahontas' father, Powhatan. She died at the age of 21 in England, and the NIWRC calls her "a child survivor of rape" who "experienced colonization and genocide at the birth of the United States of America."

Warren, who is widely seen as a potential Democratic challenger to Trump in the 2020 presidential race, also released a video on Twitter in which she and her family discuss her heritage.

Cherokee Nation Secretary of State Chuck Hoskin, Jr. issued a statement Monday in response to Warren's claims, saying, "A DNA test is useless to determine tribal citizenship. Current DNA tests do not even distinguish whether a person's ancestors were indigenous to North or South America. Sovereign tribal nations set their own legal requirements for citizenship, and while DNA tests can be used to determine lineage, such as paternity to an individual, it is not evidence for tribal affiliation."

"Using a DNA test to lay claim to any connection to the Cherokee Nation or any tribal nation, even vaguely, is inappropriate and wrong," Hoskin continued. "It makes a mockery out of DNA tests and its legitimate uses while also dishonoring legitimate tribal governments and their citizens, whose ancestors are well documented and whose heritage is proven. Senator Warren is undermining tribal interests with her continued claims of tribal heritage."

Representatives from the nation have spoken out against Warren in the past as well, calling on her to apologize and "accept responsibility for misappropriating Native identity for her own economic and political gain."

"I am not part Cherokee," wrote Rebecca Nagle in a ThinkProgress Op-Ed in 2017. "There is not one member of my family who was Cherokee. I am Cherokee. I am an enrolled citizen of Cherokee Nation and a member of my home and urban Indian communities. We are living, real, and whole people; not fractions of Indians who used to be real."

However, other Native people have embraced Warren. Dakota/Lakota writer Ruth Hopkins tweeted Monday that "DNA tests do not make one Native" and that Warren has disproven allegations that she gained from the claim.

Warren is not claiming tribal membership. Rather, distant descendancy. This is her truth. She has shown that she is not fraud in that she has not used Native heritage to gain employment. Time to put down the pitchforks. I will support Warren as long as she fights for my People.

​"Tribal membership is NOT race based," Hopkins wrote in another Tweet, "It's a distinct political classification distinguished by the fact that tribes are sovereign nations that predate the US & made treaties with the US. Claiming Native ancestry is NOT the same as being a tribal member."

Elizabeth Warren Denies Plans to Run for US President