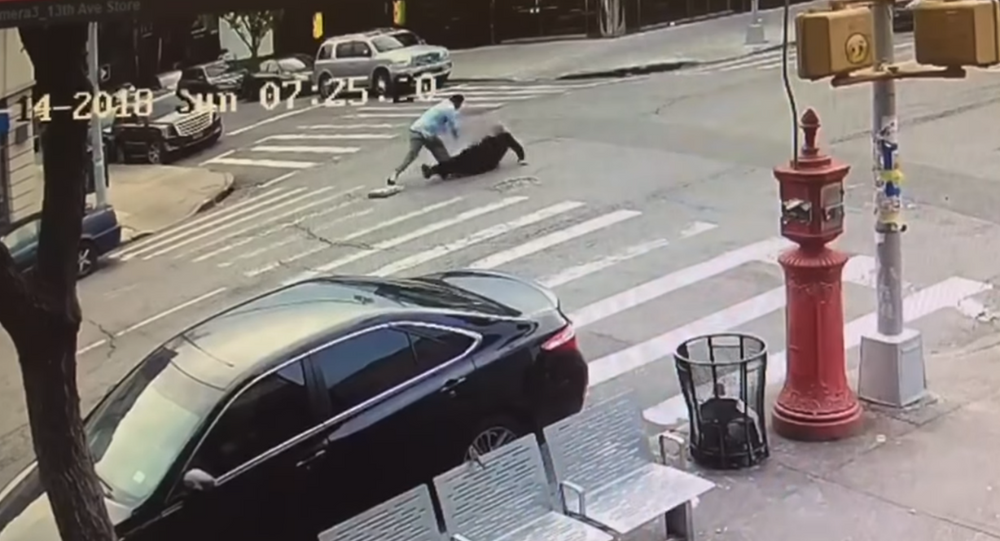 Lipa Schwartz, a 62-year-old Jewish resident of New York City's Brooklyn borough, was heading over to his local synagogue for the Sunday morning service when he suddenly became the victim of a livery driver's rage.

The violent incident took place around 7:30 a.m. local time near the intersection of 46th Street and 13th Avenue. Released surveillance footage shows 37-year-old Farrukh Afzal speeding toward Schwartz, slamming on his brakes, and then chasing Schwartz into the middle of the street before physically assaulting him.

​After Schwartz falls onto the ground during a brief foot chase, Afzal picks him up by the back of his jacket and punches him twice before pushing him back on the ground. Two additional blows are dished out on Schwartz before a member of the Hasidic community approaches the scene in an attempt to end Afzal's attack.

Although the man's efforts did prove successful, it ultimately left him being chased by Afzal as a beaten Schwartz tried to get his bearings.

"I feared for my life. I knew it's either I fight myself out of this, or I might be dead," Schwartz later told blog BoroPark24. "Burich Hashem I'm out of the hospital with some minor bruises, but the trauma of being attacked by someone who seemed to want revenge will stay with me forever."

Once Afzal was arrested by officers with the New York Police Department, Schwartz told ABC 7 that he confronted him, looking for an explanation. "I went to him when he was handcuffed, 'What did I do to you that you tried to murder me? Tell me,'" Schwartz said. "He didn't answer back."

Schwartz was taken to the Maimonides Medical Center with minor cuts and bruising on his head.

Though Schwartz did tell ABC 7 that he believed Afzal attacked him because he was Jewish, prosecutors told the New York Post that Afzal acted out after Schwartz reportedly punched his car's window when he previously passed by him at another intersection. Authorities do not believe that Schwartz's religious background motivated the attack.

The New York City Taxi and Limousine Commission told the Post that Afzal is not licensed by the agency and has previously been summonsed for being an unlicensed taxi operator.

David Sears, a spokesperson for the Breslov Center, told Sputnik Monday that the incident was just the latest to take place in recent years in the Brooklyn area.

"My understanding is that none of these attacks are part of any concerted effort but are random incidents of anti-Semitism perpetrated by people of various backgrounds," Sears said. "We are glad that this criminal was arrested and trust that he will be prevented from repeating such acts of violence."

"But the long-term solution to such hatred must be the quest for peace in the Middle East, an end to hateful propaganda everywhere, and the ongoing encounter of people of good will from different faiths to establish friendship and understanding," he added.

Afzal, who police say has had eight prior arrests, was arraigned late Sunday on charges of attempted assault in the second degree, assault in the third degree, menacing and harassment. His bail was set at $15,000, according to the Post.