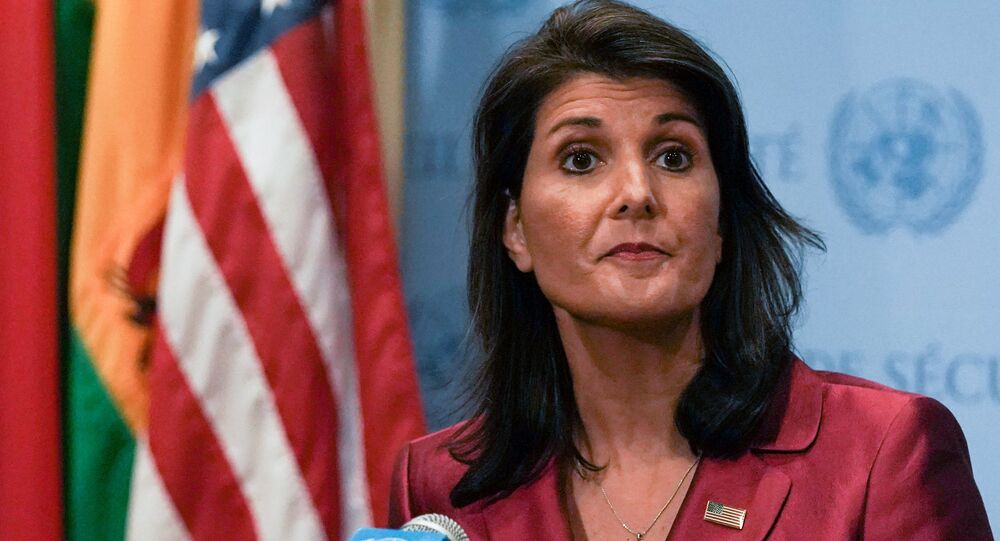 Now that Nikki Haley has announced that she is parting ways with the Trump administration by year-end, the US president is reportedly choosing between two picks for the United Nations job.

The POTUS is understood to be looking for a female pick and has reportedly narrowed down his shortlist to just two diplomats: US Ambassador to France Jamie McCourt, and US envoy to Canada Kelly Knight Craft.

The unnamed sources in the US administration have indicated that the president was leaning toward hiring someone with a professional background in the White House to avoid red tape. "It's so hard to get a security clearance so there's a bias to get someone who is already in the system," said a senior aide.

"If you go picking somebody not in government, they would have to go through paperwork for background checks, financial vetting, and that can take a while," argued another source. "The White House is definitely looking for somebody already working in government to make them more of a safe bet."

McCourt made a fortune in real estate together with her ex-husband, Frank H. McCourt Jr. The two purchased the baseball club Los Angeles Dodgers for $430 million from Rupert Murdoch's News Corporation in 2004. Jamie and Frank's divorce and battle over Dodgers ownership made national headlines in 2011; she accepted a $131 million settlement from her ex-husband, who sold the team the following year. McCourt dished out hundreds of thousands of dollars to Donald Trump's 2016 presidential campaign; in June 2017, Trump nominated her to be the US ambassador to Belgium but in the end sent her to France and Monaco instead.

© Sputnik
Why Did Nikki Haley Unexpectedly Resign as UN Ambassador?

Knight Craft, another major Trump donor, is the wife of Kentucky coal giant Joe Craft. A vocal supporter of Republican causes, in 2007 she was chosen as a US alternate delegate to the United Nations, where she focused on American policies in Africa. She and her husband initially supported Marco Rubio in the 2016 presidential primary, but then pledged $265,400 for Trump's campaign.

Earlier this week, Donald Trump announced that Nikki Haley would resign from her UN position at the end of 2018. Haley, who previously served as governor of the US state of South Carolina, ruled out running for a top job at the White House in 2020, but noted that she would campaign for Trump ahead of the 2020 presidential election.

It was also revealed this week that Haley will be departing the UN with a large chunk of debt. Though Haley's office stated that her resignation was not the result of her personal finances, her financial disclosure form indicated that she had up to $1 million in debt in 2017.