Russian Envoy: US, Russia Must Revive Communication on Strategic Stability

"The current relations between Russia and the United States struggle through the worst times. Historians, politicians, political scientists cannot recall any other time when our relations were in such a miserable state," Antonov said. "Other countries, international peace and security all suffer because of this. The worse the US-Russia relations get, the worse the situation concerning security as well as nuclear arsenals’ reduction and limitation in the world becomes."

Antonov emphasized that Russia and the United States bear a special responsibility for maintaining global peace and security as they are the world’s biggest nuclear powers and permanent members on the UN Security Council.

© Sputnik / Kirill Kallinikov
Russia Sends Strong Signal to US, NATO by Deploying S-300 in Syria – Analyst
"I would like to remind you that the positive outcomes of Soviet- and Russia-US negotiations always had a positive impact on disarmament in other areas," Antonov said.

Moreover, the United States and Russia are currently in visa war with each other, Antonov said. "In my mind, we have a visa war between the United States and the Russian Federation," Antonov said on Friday. "We have so many problems but again I would like to say — and I have confirmed it many times at the State Department and the White House — that we are ready to stop this visa war."

"We received the answer — no," Antonov said. The Russian ambassador noted that he has also been denied permission to check the building of the Russian Trade Representative in Washington DC that has been ceased by US authorities.

"There is no possibility for me even to enter this building," Antonov said. Every two weeks Russia sends a note to the United States requesting permission for the country’s ambassador and other diplomats to be allowed to enter the Russian property and the answer is "no" without offering any explanation, Antonov explained.

Russian Ambassador also told reporters that he offered to organize a bilateral meeting between US Secretary of State Mike Pompeo and Russian Foreign Minister Sergey Lavrov on the sidelines of the UN General Assembly in New York in September. 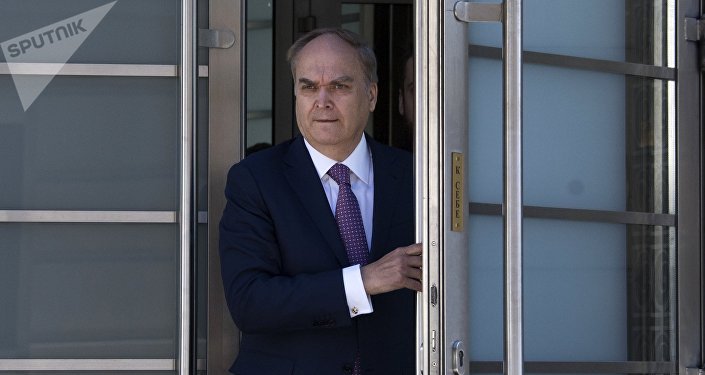 © Sputnik / Maksim Blinov
Russia Reaffirms Readiness for Mutually-Beneficial Dialogue With US - Antonov
"It’s a pity that there was no possibility for our ministers of foreign affairs to meet each other during the high-level week at the UN General Assembly," Antonov said in California on Friday. "I have offered the United States to organize such a meeting on the margins of the UN General Assembly but to my regret [sic], I don’t want to name anybody, there was no any conversation between our Ministers."

Lavrov told a press conference at the UN General Assembly that current US-Russia relations are probably the worst ever since the establishment of diplomatic ties between Moscow and Washington.

Meanwhile, a new agreement on strategic offensive weapons will unlikely be reached by 2021 because of the current confrontation between Moscow and Washington, Antonov said.

"All the more pressing issue is what will happen to nuclear disarmament after 2021, when the New START is set to expire," Antonov said. "Due to a deep crisis in the Russia-US relations it would be naïve to assume that our countries are likely to conclude a new treaty on strategic offensive arms by 2021."

That is why Russian President Vladimir Putin suggested considering a possibility of extending the New START for another five years, he added. "The Americans are silent," Antonov continued. "We hope that the United States will not delay its response and voice its opinion on the treaty, which was previously regarded by the majority of countries as a "golden standard" in disarmament."

© REUTERS / Larry Downing
US State Dept Skeptical of Reports Alleging Russia Responsible for Sonic Attacks
Under the New START Treaty, which came into effect in 2011, the United States and Russia agreed to arms reduction objectives, including reducing the number of deployed intercontinental ballistic missiles, submarine-launched ballistic missiles, nuclear armed bombers and nuclear warheads. In late July, US Secretary of State Mike Pompeo confirmed that the United States had no position with regard to extending the treaty beyond 2021.

Russia is focused on upholding the Treaty on the Nonproliferation of Nuclear Weapons (NPT) and considers the accord to be a key component of international security, Antonov stressed.

"We are focused on bolstering and implementing the NPT, which is the cornerstone agreement of non-proliferation and disarmament," Antonov told students at the Middlebury Institute of International Studies at Monterey, California. "We consider the NPT to be a fundamental element of global stability and security. It is a reliable barrier against nuclear weapons proliferation."

Antonov said Russia strictly adheres to its obligations under the NPT, as well as the Convention on the Prohibition of the Development, Production and Stockpiling of Bacteriological and Toxin Weapons and on Their Destruction.

READ MORE: Trump Calls Talks With Putin One of 'Best Meetings' He Ever Had as President

"Apart from its non-proliferation dimension, the NPT is a unique tool that promotes nuclear disarmament, as well as international cooperation in the peaceful uses of nuclear energy," Antonov said. "We stand for reaching the goal of reaching the world free of nuclear threat."

© CC0
New Pentagon Report Names Russia, China as Threats to US Space Capabilities
Antonov emphasized that reaching the goal is a difficult and time-consuming process whereby a number of key factors influencing strategic stability must be considered. "The aspirations of a number of states to ban nuclear weapons in isolation from the NPT are doomed to failure," Antonov said.

Antonov pointed out that there is a forthcoming Review Conference of the NPT Parties in 2020 and said Russia is ready to participate.

"Our biggest accomplishment is that in February of 2018 we met all requirements under the New START Treaty," Antonov said. "We haven’t received any complaints in this regard. However, we have questions to our American colleagues on how they have been implementing the Treaty’s provisions."

In addition, Antonov said there are also questions as to other nuclear states’ implementation of the NPT Article VI, which stipulates that each party should pursue negotiations in good faith on effective measures relating to cessation of the nuclear arms race and to nuclear disarmament, and on a treaty on general and complete disarmament under effective international control. "We’ll have to check out their reports during the conference, or, just as before, they will mostly confine to criticism from Russia and the United States," Antonov said.

The NPT was signed on July 1, 1968 and went into effect in March 1970. There are 190 parties to the accord, but India, Israel, North Korea, Pakistan and South Sudan are not signatories.

READ MORE: Trump Says He Would ‘Do Very Well’ in Boxing Match Against Putin

"It is necessary to revive the channels of [US-Russian] bilateral communication on strategic stability and create conditions that will allow us to advance strengthening non-proliferation of the WMD and means of their delivery, to preserve and adapt, where necessary, mechanisms of arms control," Antonov said. "We hope that the US administration will soon finalize interagency coordination of its approaches that will not leave the international community disappointed."

Antonov said positive momentum for international stability was gained during the summit between Russian President Vladimir Putin and US President Donald Trump in Helsinki in July. "The intent of both presidents to bolster international security is evident," Antonov said. "It is regretful, though, that it has not been put into tangible actions. We are ready for a constructive dialogue."

Russia, he added, requires an equal dialogue with mutual consideration of each other's interests. Such action will have a positive impact on international stability, peace and security, Antonov said.

© AP Photo / Hassan Ammar
Russia Offers US Cooperation in Restoration of Syria – Report
Last month Antonov said that during the Helsinki summit Putin proposed measures to Trump for the United States and Russia to cooperate on issues such as strategic stability, counterterrorism and cybersecurity.

Relations between the United States and Russia worsened following their disagreement over the crisis in Ukraine. The United States imposed several round of sanctions against Russia after Crimea held a referendum in 2014 in which a vast majority of residents decided to reunify with Russia. Washington also accused Moscow of meddling in the 2016 US presidential election and has imposed additional rounds of sanctions. Russia has repeatedly denied the allegations.

Earlier in the day, a source told Sputnik that Patrushev’s meeting with Bolton is scheduled during the US national security adviser's visit to Moscow on October 22-23.