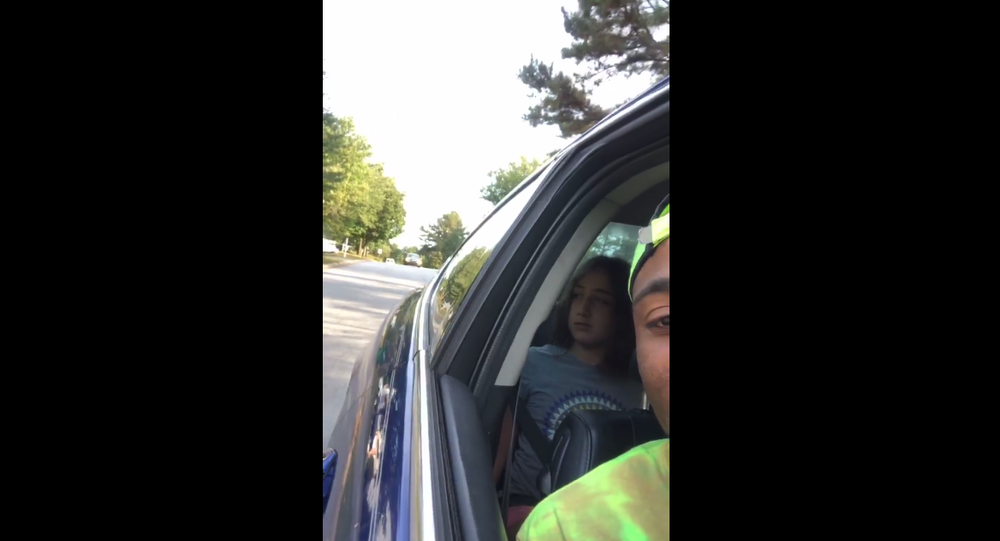 In the latest instance of white people calling the cops on black folks going about their daily business, a Georgia woman phoned the police after seeing two white children with a black man, a scene she decided was suspicious.

Corey Lewis runs a youth mentorship center called "Inspired by Lewis" in Marietta, Georgia, and was watching six-year-old Nicholas and 10-year-old Addison Parker for their parents, David Parker and Dana Mango. The arrangement had been set up weeks prior, WGCL-TV reported Wednesday. The children are white; Lewis is black.

That's a fact that an unidentified white woman in a dark-colored Kia sedan took as suspicious, approaching the trio outside a Cobb County Walmart and demanding to speak with the kids, reportedly asking to speak with Addison in particular to ask if she knew Lewis. Lewis refused, and they left to go back to his house, with the woman calling the police and tailing them all the way home.

"This lady followed me all the way home — to my neighborhood," Lewis said on a Facebook Live recording of the incident, sticking the phone out the window to show the woman in the Kia tailing them through a residential neighborhood. "I'm about to pull up to the crib, let my mom handle this one."

Once he arrives and begins to explain things to (presumably) his mother, she offers to "get in my car and follow her," but Lewis declines.

A third video shows the interaction once officers arrive.

The officers, who seemed to quickly realize the ridiculousness of the situation, questioned the kids before calling their parents.

David Parker and Dana Mango told CBS46 they were in disbelief.

"I said, ‘Are you saying that because there's an African-American male driving my two white kids, that he was stopped and pulled over and questioned?' And he said, ‘I'm sorry ma'am, that's exactly what I'm saying,'" Mango told the station, relaying her conversation with the officer.

"It made me feel like it was definitely wrong and that people shouldn't be racist and it doesn't matter what skin color we are," 10-year-old Addison told Fox 5 in an interview. When the police pulled up, "My heart was pumping, I was so nervous," she told reporters.

Lewis told Fox 5 of the woman who followed him, "From her perception, she'd seen something that wasn't right; she was being judgmental, me looking the way I am, being with two kids who don't look like me."

Parker told CHS 46 he guesses "B-W-B is the new thing, babysitting while black."

The Cobb County incident is only the latest in a number of high-profile alleged racial profiling incidents to be caught on camera, the perpetrators of which are then shamed on social media for their racist antics. Given nicknames like "BBQ Becky" and "Permit Patty," white people have unleashed the power of the state on black folks going about their lives while engaging in such nefarious activities as sitting at Starbucks, mowing lawns, playing golf, sleeping on a couch in a college dorm, shopping at a pharmacy or having a cookout in a public park. When the busybodys' identities have been found, they have in some cases lost their jobs.