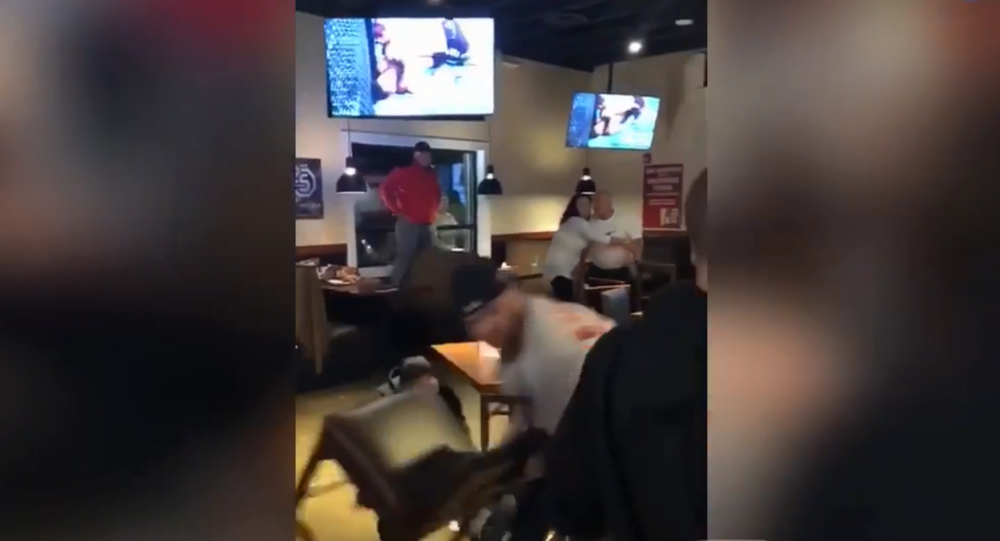 Officers with Massachusetts' Methuen Police Department are on the hunt for suspects involved in a late night brawl that broke out at a local bar that was hosting a UFC watch party over the weekend.

Cellphone footage of the incident shows beers, chairs and fists being flung by several combatants as shocked bar-goers look on in fear. Things escalated even further when a man sporting a Red Sox jersey picked up a chair and attempted to hurl it at another person before dishing out a series of knuckle sandwiches.

Wanting to bring the violent fight to a close, several fellow customers eventually intervened to pull the brawlers apart. At one point in the recording, a man is seen walking past the camera frame with a bloodied eye.

WARNING: Footage may be disturbing for some viewers.

​Though it's still unclear what exactly caused the fight to break out, it did take place moments after dozens of guests entered the Brickhouse Tavern + Tap to watch the much-anticipated UFC fight between Conor McGregor and Khabib Nurmagomedov, according to Boston news station WHDH.

"It was just chaos, no other way to explain it," Matthew Coco, a Methuen paramedic called to the scene, told the New England Cable News. "The beer going everywhere, the chairs being thrown, and it was pretty intense."

Although local police officials were able to speak with the victim and his friends about the incident, they were not able to identify any of the assailants at the time. Authorities are now calling on residents to reach out should they have any information regarding the incident.

Methuen Police Captain Jim Jajuga told WHDH that officers are searching through surveillance footage to identify suspects. According to Jajuga, the main person of interest in the case involves a person who is seen breaking a glass over a bar patron's head.

At a minimum, charges against the glass thrower may include assault and battery with a dangerous weapon. Police indicated that one of the customers at the bar suffered minor lacerations and had a few teeth knocked out, though they did not identify the victim.