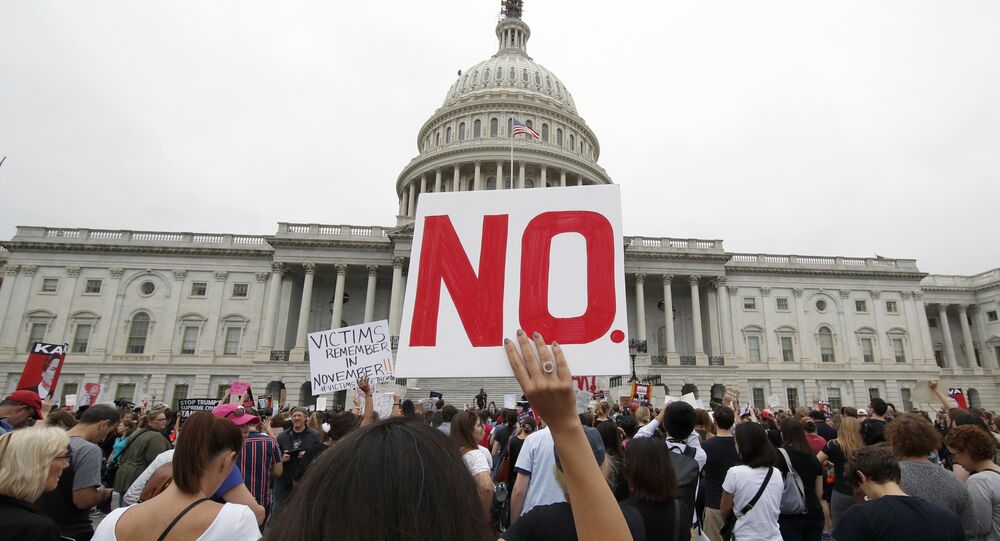 Across the United States protestors fighting against the nomination of judge Brett Kavanaugh to the US Supreme Court saw their hopes dashed and have reacted with anger.

As protesters chanted "vote them out" and "November is coming," while demonstrating on Capitol Hill ahead of the Kavanaugh vote, the 53-year-old conservative judge was confirmed by the US Senate in a vote 50 to 48 in favor of the appointment.

Even while Vice President Mike Pence ran down the details of the final tally, protesters inside of the Senate chamber could be heard shouting "Shame on you!" according to reports.

​Opposing lawmakers on the Senate floor were unsparing in their remarks.

"The senate is about to elevate a nominee who doesn't belong on the nation's highest bench," declared Senate Minority Leader Chuck Schumer prior to the vote.

​Schumer noted that the newest Supreme Court justice was an "extreme partisan" who displayed an "injudicious demeanor," and called for voters in the US to exercise their rights by removing lawmakers from office in the upcoming November midterm elections.

​"Change must come from where change in America always begins: the ballot box," he said, cited by the Washington Post.

Meanwhile, Capitol Police in Washington said Saturday they had arrested 164 people as the US Senate was voting on Judge Brett Kavanaugh’s confirmation to the Supreme Court.

The demonstrators were charged with crowding, obstructing or incommoding. They were processed offsite and released.

President Donald Trump took to Twitter to comment on the size of the crowd that gathered outside the Supreme Court to protest against his nominee.

The crowd in front of the U.S. Supreme Court is tiny, looks like about 200 people (& most are onlookers) — that wouldn’t even fill the first couple of rows of our Kansas Rally, or any of our Rallies for that matter! The Fake News Media tries to make it look sooo big, & it’s not!

​Kavanaugh has previously been accused by three women of sexual misconduct in the past, resulting in lengthy testimony against the judge and featuring a response from the nominee last week.

​The newly-minted Supreme Court justice — who was sworn within hours — denies the many charges brought against him.