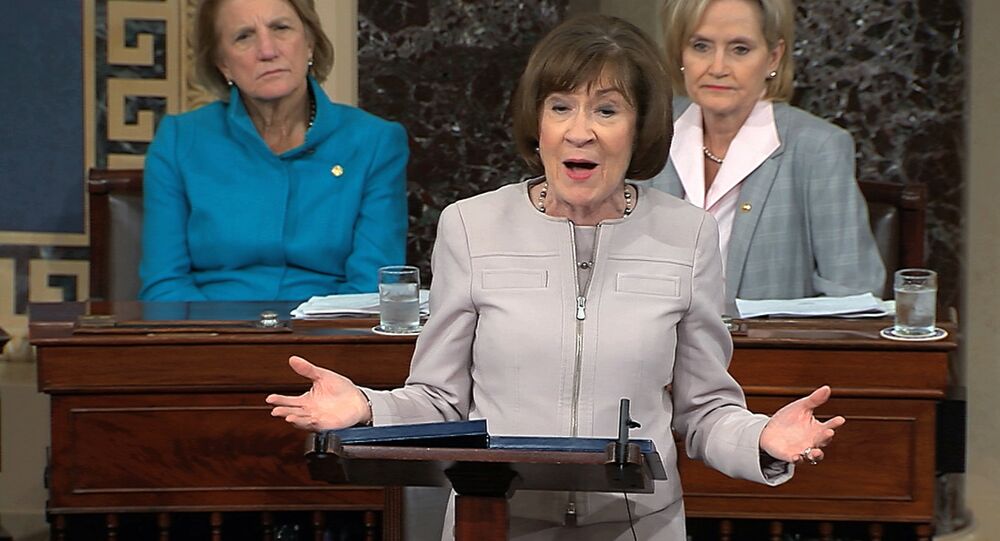 Senator Susan Collins (R-ME) has announced that she intends to vote in favor of Brett Kavanaugh’s confirmation to the US Supreme Court in the upcoming final confirmation vote, which could reportedly come as early as Saturday.

At present, it appears the coming vote on Kavanaugh's confirmation will be 51-49 in favor of Kavanaugh — the same count as a vote Friday morning in which senators voted to advance Kavanaugh's nomination to a final vote. In addition to Collins, other senators who had been undecided, including Jeff Flake (R-AK) and Joe Manchin (D-WV) all voted to advance his nomination.

Senator Lisa Murkowski (R-AK) shocked observers by voting against Kavanaugh's advancement — the only Republican to do so.

© REUTERS / Saul Loeb/Pool
US Senate Committee: FBI Found "No Hint of Misconduct" in Probe Into Kavanaugh

Before saying how she would vote, Collins said Kavanaugh's nomination hearings had shown the process has hit "rock bottom."

"Today we have come to the conclusion of a confirmation process that has become so dysfunctional it looks more like a caricature of a gutter level political campaign than a solemn occasion," she said.

Collins noted she reviewed Kavanaugh's 12-year record on the DC Circuit Court of Appeals, including speeches and articles by him during that period, and was also helped by other attorneys. She also noted she'd met face-to-face with Kavanaugh and talked with people who knew him personally, including former US Secretary of State Condoleezza Rice.

The senator told the nation's upper legislative body that she based her decision Alexander Hamilton's "Federalist Paper 76," a philosophical document dating to debates surrounding the formation of the US Constitution in the late 18th century.

Collins dismissed fears that Kavanaugh would repeal the Affordable Care Act's (ACA) protections for those with pre-existing conditions, that he would not stand up to US President Donald Trump on the court, and that his sharply conservative politics posed a threat to same-gender marriage or to abortion rights.

While Collins mounted a defense of Christine Blasey Ford, who testified before the Senate Judiciary Committee that Kavanaugh had assaulted her, and of sexual assault survivors and the #MeToo movement, she also said that some of the people who are trying to engineer Kavanaugh's defeat don't care about Ford, but about their political ends. Collins blamed them for thrusting Ford into the spotlight, which Ford never sought.

"Some of the charges levied against just Kavanaugh illustrate why the presumption [of innocence] is so important," Collins said, calling an accusation of gang rape "outlandish," saying it had no evidence and simply "parroted public statements of others."

"I found [Dr. Christine Blasey Ford's] testimony to be sincere, painful and compelling," Collins said. "I believe that she is a survivor of a sexual assault and that this trauma has upended her life."

"Nevertheless, the four witnesses she named could not corroborate any of the events of that evening gathering where she says the assault occurred."

© AP Photo / Manuel Balce Ceneta
Confirming Kavanaugh ‘Would Be an Act of Violence Against Women’: 300 Arrested at US Capitol During 'Cancel Kavanaugh' Rally (PHOTOS, VIDEOS)

Collins cited Kavanaugh's denial of the accusations, as well as the denials of some of his friends, in her speech. "I do not believe that these charges can fairly prevent judge Kavanaugh from serving on the court," she said.

Nonetheless, the Maine senator said she hoped the event would have "unintended positive consequences" on the Supreme Court nomination process.

Guests in the gallery shouted" Vote no! Show up for Maine women!" before Collins began speaking.

Ahead of @SenatorCollins' speech on the Senate floor, protesters chant "believe women!" from the gallery pic.twitter.com/pIWzhvUKgc

​Collins was one of only four US senators who by Friday afternoon remained undecided about whether or not they will vote to add Kavanaugh to the nation's highest court, replacing Justice Anthony Kennedy, who this past summer announced his intention to retire.

Senate Majority Leader Mitch McConnell said Friday he had lunch with Collins Friday afternoon. "We had a good day," he told reporters. "We look forward to the vote tomorrow."

Earlier this week, Collins was escorted out of a hearing by police officers. Police later threatened to clear a public hallway outside her office in the Dirksen Senate Office Building and physically blocked reporters from approaching the senator as she left the office to return to the Capitol for a vote, CBS noted.