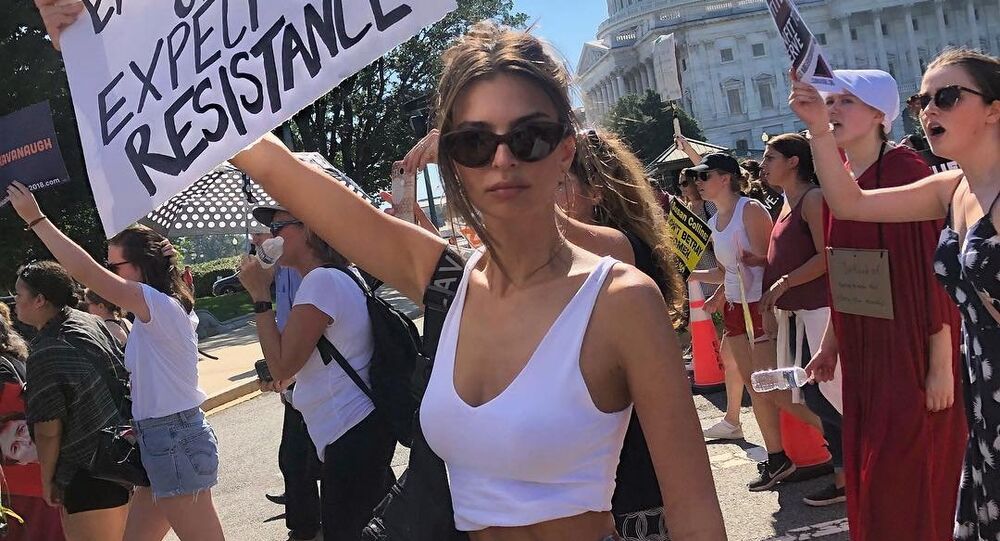 Police have reportedly detained the long-legged beauty used to speaking her mind on women’s rights and famous for snaps leaving very little to the imagination, along with comedian Amy Schumer as well as nearly 300 people, who rallied against Supreme Court nominee Brett Kavanaugh at the US Capitol.

Model and actress Emily Ratajkowski, who gained a 20-million strong following as Emrata on Instagram with photos in bikinis, tiny tops and as well as occasional expression of her view on freedom, has told her fans she’s been arrested protesting the Supreme Court nomination of Brett Kavanaugh, who she described as “a man who has been accused by multiple women of sexual assault.”

“Men who hurt women can no longer be placed in positions of power. Kavanaugh’s confirmation as a Justice of the Supreme Court of the United States is a message to women in this country that they do not matter,” the celebrity, rated among the hottest women in the US, posted on her Instagram along with a picture of her holding a sign "Respect Female Existence or Expect Our Resistance."

In her publication she demanded “a government that acknowledges, respects and supports women as much as it does men.”

READ MORE: Kavanaugh Says He ‘Was Very Emotional’ During Testimony Before Committee

Like Ratajkowski, the police also reportedly detained 37-year-old comedian Amy Schumer in the atrium of the Hart Senate Office Building. A video emerged on Twitter, where a Capitol policeman is seen asking Schumer along with other demonstrators if they want to be arrested. The celebrity, holding a "We believe Anita Hill" and wearing a green top with "This today, then #ERA," answered "Yes."

Here is @amyschumer telling cops she *wants* to be arrested.

Cop asks “Do you want to be arrested?”

Save this for the “I can’t believe I was arrested for free speech!” Tweet from her soon. pic.twitter.com/TLGaDAyh1T

​“293 individuals were arrested for unlawfully demonstrating in the atrium of the Hart Senate Office Building. All were charged with D.C. Code §22-1307, Crowding, Obstructing, or Incommoding," US Capitol Police told Sputnik News.

Earlier in the day Ratajkowski, dressed in a top with a low cleavage, was seen on the social media feed from the Cancel Kavanaugh rallies in Washington near her co-star in the recent hit I Feel Pretty film, Amy Schumer, who spoke to the crowd outside the E. Barrett Prettyman Federal Courthouse. They were in attendance along with Lena Dunham and Whoopi Goldberg.

Kavanaugh Says He ‘Was Very Emotional’ During Testimony Before Committee