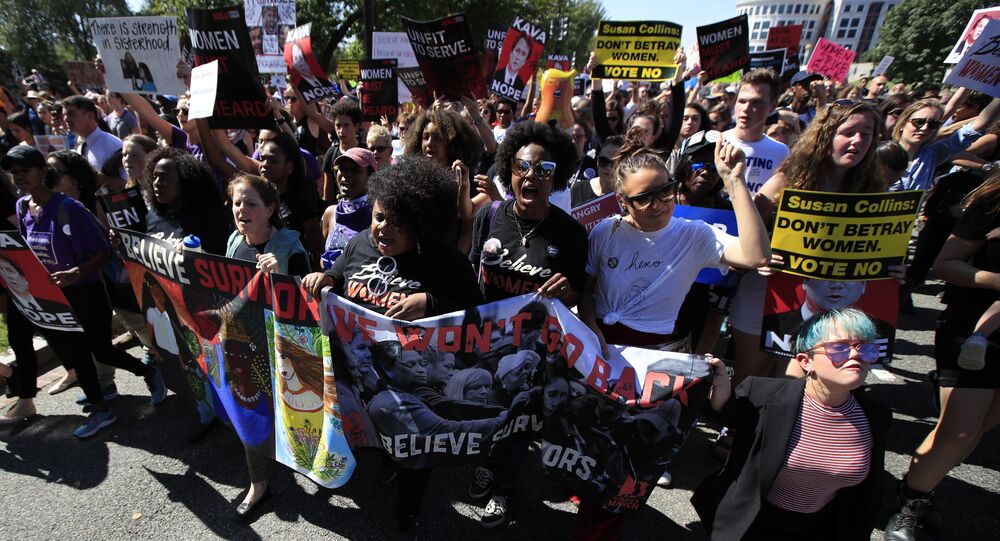 Police arrested dozens of protesters at the US Capitol on Thursday who rallied against Supreme Court nominee Brett Kavanaugh.

"293 individuals were arrested for unlawfully demonstrating in the atrium of the Hart Senate Office Building. All were charged with D.C. Code §22-1307, Crowding, Obstructing, or Incommoding," US Capitol Police told Sputnik News.

Protesters marched from the federal court in Washington, DC — where Kavanaugh currently serves as a judge — to the US Supreme Court Building. "Kavanaugh has definitely chosen to rule against the working people of America," a member of the Communications Workers of America union told Sputnik News en route to the nation's highest court.

"You have to let your voices be heard; you can't just hang around and say nothing about it," she added.

Sputnik News also interviewed two members of the women's anti-war group Codepink. "Codepink is traditionally known as an anti-war group, but above all we are a pro-women group and appointing Kavanaugh would be an act of violence against women, so we are out here to try to stop him," activist Mary Miller said.

Watching Kavanaugh's confirmation hearings "as a woman, made me feel that Kavanaugh is not fit for the court. It's not even a matter of whether or not he did the assault: it's the fact that he was partisan, he was unhinged, he was emotional, and he has no business being on the Supreme Court. I mean, allegations aside, I think there's a pretty good case to be made for that," Caroline, a Codepink activist, told Sputnik News.

Caroline said she had very little confidence in the FBI, which has been probing the sexual misconduct allegations against Kavanaugh since last week. Early on Thursday, the bureau's findings were shown to US senators for the first time. Critics derided the merely days-long investigation as inadequate.

"Personally, I knew that it was going to be crap. I don't think that the FBI ever does anything right," Caroline said. "I don't think we should put our trust in the institution in the first place, so I'm not really surprised, and I think that it was a distraction for a couple of days and now that it has happened it's not going to change anyone's mind. And there you go, he's still going to get confirmed."

If Kavanaugh is confirmed, as she suspects, it will mean the US will have more "illegitimate institutions," the activist argued.

"The Senate, the House of Representatives… they gerrymander their way into power, and the president of the United States does not have the popular vote behind him — illegitimate. The Supreme Court now will be illegitimate," she told Sputnik News.

After the rally which saw speeches from comedian Amy Schumer and Senator Kirsten Gillibrand (D-NY), protesters entered the Hart Senate Building. Schumer, a distant relative of Senate Minority Leader Chuck Schumer, told police that she was willing to be arrested and was ultimately taken into custody with dozens of others. She refused to give comment to Sputnik News, however.

302 protesters were arrested and chants of "We believe survivors!" broke out as police surrounded the crowd.