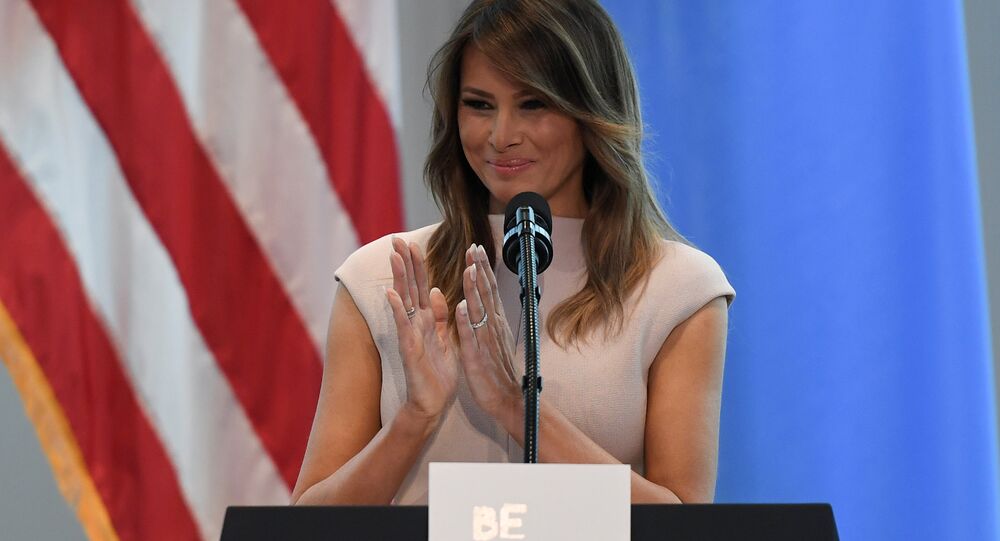 In a tour, which is due to kick off on Monday, FLOTUS is expected to promote her May’s Be Best Program on children’s health among four African nations, with similar trips taken by all of Melania Trump's predecessors.

US First Lady Melania Trump is getting ready to embark on her first major international trip without her husband, aiming to focus her five-day African tour around Ghana, Malawi, Kenya and Egypt on child welfare.

In spring, Trump met a barrage of criticism across Africa and beyond after he privately referred to a number of the continent’s states as “s---hole countries,” but declared at the United Nations as recently as last week that both he and his wife “love Africa.”

“There are many programs across the country that are doing great things for children, and I believe we can replicate many of these programs overseas. This is why I am pleased to be working closely with USAID as I prepare for my first major international trip to Africa,” Melania Trump said at the time in New York.

Twitter users seem to be divided over Melania’s plans, with some sincerely applauding her initiatives back home and intent to promote them globally:

The @FLOTUS is such an inspiration. What I like about Melania and her team is that they just get on with it…no fuzz no frills straight to objectives and work hard until they get results. No surprise that she is getting the praise and recognition beyond all odds.

Yes! We Love you Melania!! You are beautiful inside and out! Keep doing an outstanding job supporting our beautiful nation and your wonderful husband and know that you are an inspiration to so many people who aren't on twitter to reply.

thanks melania to helping poor people

Others, however, couldn’t resist the temptation to direct a couple of nasty words at Donald Trump’s “children welfare” policies with regard to Texas, where migrants are housed, inviting Melania to “raise Barron” first to be “a better human than his wicked father:”

Why is Melania trump going all the way to Africa to focus on issues involving child welfare when she could be visiting tent cities in Texas where her husband is housing migrant children? https://t.co/n9B7ECMMq2

Try teaching your husband how to #BeBest first and then maybe we will believe that really mean it.

WHAT YOU SAY. WHAT YOU DO. DOESN'T MATTER MELANIA. JUST STOP. JUST RAISE BARRON TO BE A BETTER HUMAN THAN HIS WICKED FATHER. YOUR HUSBAND SUPPORTS A JUDGE ACCUSED OF #SEXUALASSAULT. HE SUPPORTS RACISM. HE. IS. EVIL. AND THAT CANCELS OUT ANYTHING YOU CAN SAY OR DO AS 1ST LADY.

Some however opted to distance her from Trump’s political moves:

She DONE NOTHING TO HURT ANYONE is the point! She married a man the people don't like that's ALL! She doesn't deserve EVIL HATE FROM ANY OF US Regardless of party or view! Just give her respect of being a woman married to a POTUS like we've done before for all others!Nothing more

One user even adduced a hilarious memes on the subject, with others explicitly demanding “the results” of her Be Best campaign:

"Melania Trump's not even trying at this point" — #trump pic.twitter.com/VPMZtCzEwt

You’re a waste of tax payer money. Where are the results of your be best campaign?!

Slovenian-born Melania Trump, mother of Donald Trump’s 12 year-old son Barron, already promotes children’s well-being in the US under a recently launched initiative called “Be Best.” Unlike her most active immediate predecessors, such as Hillary Clinton, Laura Bush and Michelle Obama, who were seen accompanying their better halves on most of their international trips, Melania Trump has been keeping a rather low profile, especially during the first six months of Trump’s term, when she was preoccupied with their son’s schooling in New York.

In light of previous first ladies’ experience of such travel, Melania’s trip is very much anticipated in terms of her evolution in the closely watched role of a FLOTUS.