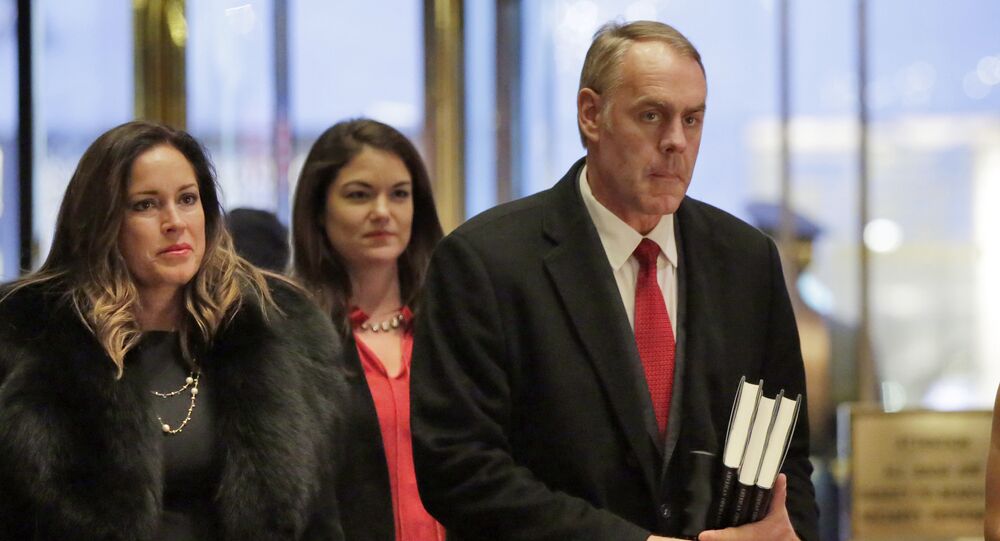 US Interior Secretary: Naval Blockade is an Option for Dealing with Russia

The Interior Secretary proposed a naval blockade of Russia as a way to push Moscow out of energy market.

Speaking Friday at an industry event in Pittsburgh hosted by the Consumer Energy Alliance, US Interior Secretary Ryan Zinke said the US Navy can blockade Russia if needed in order to keep it from controlling energy supplies in the Middle East as it does in Europe.

"The United States has that ability, with our Navy, to make sure the sea lanes are open, and, if necessary, to blockade… to make sure that their energy does not go to market," Zinke said.

© AP Photo / Fernando Llano
Venezuela Accuses Colombian Branch of State Energy Firm of Corruption - Reports
According to Washington Examiner, Zinke attended the event to explain why the technology of hydraulic fracturing, also known as fracking, and the shale energy boom has supposedly given the US an edge over its rivals Russia and Iran, by making the US less dependent on foreign sources of energy.

The Interior Secretary believes that the reason why Russia entered the Middle East is hydrocarbons trade.

"Russia is a one trick pony," Zinke said, stating that Russian economy depends solely on its ability to sell energy. "I believe the reason they are in the Middle East is they want to broker energy just like they do in Eastern Europe, the southern belly of Europe."

Answering the question on how the US should deal with Russia and Iran, Zinke said that "there are two ways."

"We can do that because… the United States is the largest producer of oil and gas," Zinke added.

The US administration of Donald Trump has opposed new Russia's projects aimed at providing other nations with oil and gas, such as the Nord Stream 2 gas pipeline.

Trump on multiple occasions urged the US European allies to suspend the construction of the Nord Stream 2 pipeline, which would run through the Baltic Sea to a hub in Germany, bypassing Ukraine. Washington, which is seeking to promote its LNG supplies to the European Union, has repeatedly expressed its opposition to the project, claiming that it was the means of political control used by Russia to exert pressure on the European Union. Washington has made a number of attempts to impede the implementation of the project and even incorporated a provision for counteracting the construction of the Nord Stream 2 pipeline in its Countering America’s Adversaries Through Sanctions Act.

The Nord Stream 2 is a joint venture of Russia’s Gazprom with France's Engie, Austria’s OMV AG, UK-Dutch Royal Dutch Shell, and Germany's Uniper and Wintershall. It aims to deliver 55 billion cubic meters of Russian natural gas a year to the European Union.

Moscow: US Pressure on Europe Over Energy Cooperation With Russia 'Unacceptable'