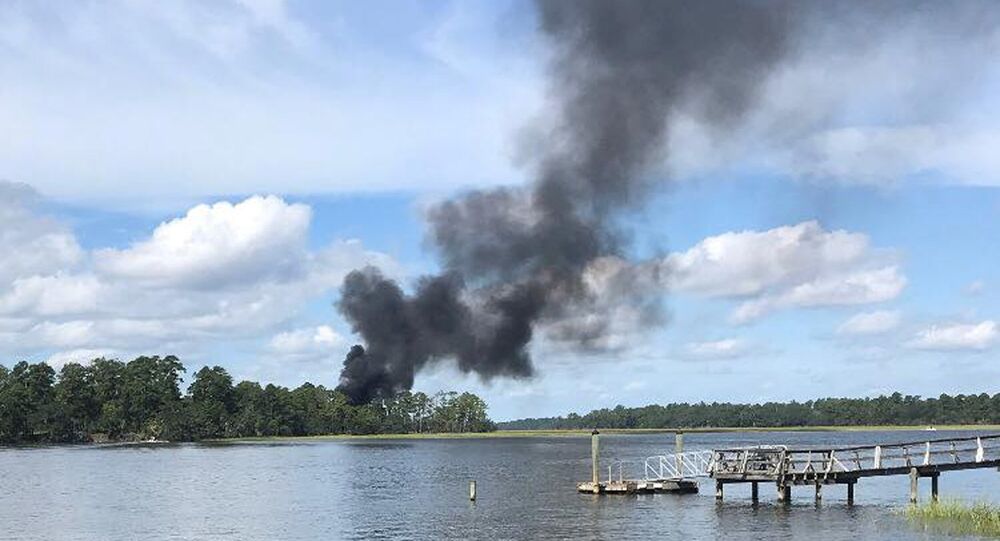 According to a Marine spokesman, the fifth-generation jet crashed one day after it flew its first combat mission in Afghanistan. Although the incident resulted in no casualties, it may bring heavy losses for the US military budget as one such aircraft is valued at as much as $115 million.

A video emerged of the suspected crash site of America's cutting-edge, multimillion-dollar stealth fighter F-35B. The clip was uploaded by a Twitter account that covers airline industry news.

The footage is said to be showing the scene one hour after the crash. Rising plumes of smoke can be seen on Little Barnwell Island, just five miles from the Beaufort Marine Corps Air Station (MCAS).

The scene one hour after a military plane crash five miles outside the Marine Corps Air Station in Beaufort. According to several news reports, the crash involved an F-35B https://t.co/cKzqzxCIJI pic.twitter.com/hIFHs3saBz

News broke on Friday that an F-35 fighter jet crashed in the US state of South Carolina, marking the first accident involving the American military's most advanced and expensive aircraft. Its announced price tag is $115.5 million, a figure that includes the airframe, engine and associated contractor costs.

According to the sheriff's office, the pilot ejected safely and remains in stable condition; the crash also caused no casualties.

The pilot from the military plane crash safely ejected. Being a valuated for injuries.

Capt. Christopher Harrison, a Marine Corps spokesman, said that the crash occurred just one day after the Corps' F-35B flew its first combat mission: a ground clearance airstrike in Afghanistan.