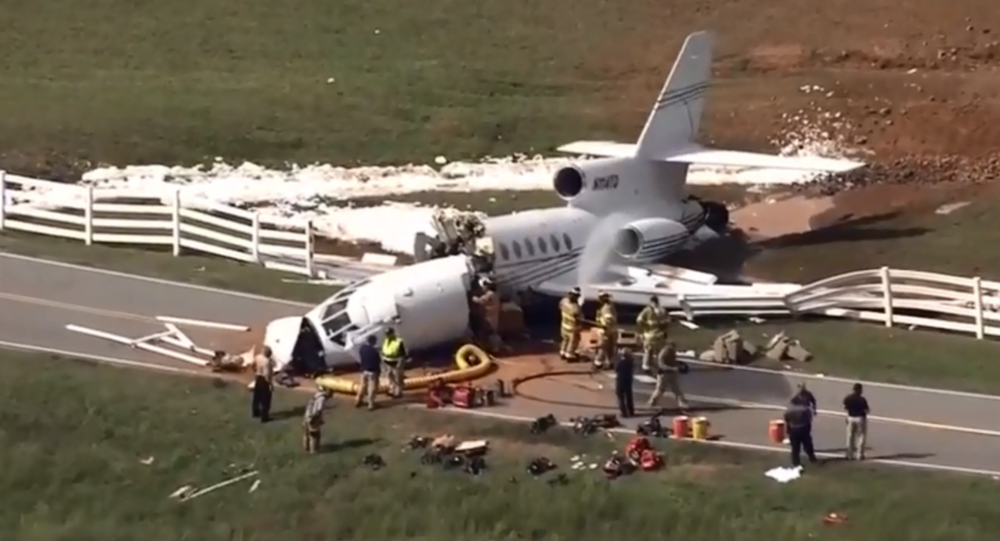 US Jet Snaps in Half as It Crashes, Killing Two (PHOTOS, VIDEO)

A personal Falcon 50 plane was split in two after it crashed in South Carolina, photographs and videos from the scene show.

The pilot and co-pilot of the aircraft were both killed, while the pilot's body remains in the cockpit. Authorities told reporters by the scene that four people were on board. Of the deceased, one was pronounced dead at the scene and the other was at the hospital. "It looked like blunt force injuries," Parks Evans, the county coroner, said.

Witnesses say that a husband and wife were passengers on the plane. The wife was reportedly injured critically and carried away by first responders while the husband was able to walk away with help.

According to Fox Carolina reporter Cody Alcorn, the jet overshot the runway. It's reportedly a common aircraft for business travel.

Jet fuel reportedly spewed from the engine, still at full throttle, after the crash. "A fair amount of fuel made it into the ditch," Police Chief Ken Miller said. "The fire department does have it contained. Hazmat also has it contained." Authorities are expected to continue working on the cleanup for the next few days.

Miller said that "at this point, we're no longer in a rescue capacity or anything like that," adding that they will work in support of the Federal Aviation Administration, who are en route. He urged nearby residents to avoid swimming in the area and smoking so as to not ignite any fuel that could be lingering.

“In maybe 20 years, we might have had three to four minor incidents and this is probably the most serious,” said the director of the local airport, Joe Frasher. “We have aircraft this large and larger routinely land at this ramp. It’s very rare that this has happened.”

The airport and roads nearby have been closed to traffic. The National Transportation Safety Board announced on Twitter that they are investigating the crash.