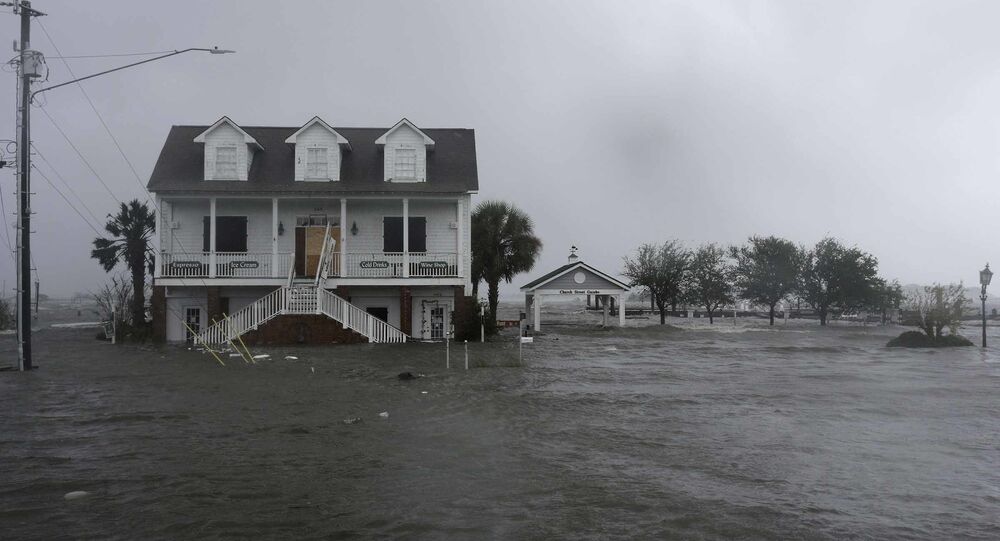 Flooding caused by Hurricane Florence, which handed down its Category 1 wrath along the US East Coast earlier this month, has gotten so bad that the US' National Aeronautics and Space Administration (NASA) was able to capture satellite imagery of contaminated waterways flowing into the Atlantic Ocean.

Photos snapped on September 19 by NASA show how several rivers in North Carolina, among them the White Oak River, New River and Adams Creek, have been so contaminated with soil, sediment, pollution and other debris that they have become discolored, officials stated in a news release.

Courtesy of NASA Landsat
A NASA satellite captured the aftermath of Hurricane Florence, showing contaminated rivers and streams near the coast flowing into the Atlantic Ocean

The images were recorded by the Landsat 8 satellite, which captured several images before and after Florence blew through the region.

"The second image combines visible and infrared data from Landsat to reveal the amount of colored dissolved organic matter (CDOM) in those waterways," the statement reads. "Organic matter — such as leaves, roots, or bark — contains pigments and chemicals (such as tannins) that can color the water when they dissolve."

"Depending on the amount of dissolved particles, the water in natural-color imagery can appear blue, green, yellow or brown as the CDOM concentration increases," the release notes.

According to officials with the University of North Carolina, water discoloration from pollutants can lead to mass fish kills and a slew of other environmental issues, The News & Observer reported.

"In the discharges after hurricanes Floyd and Matthew, these dead zones grew large enough to affect shellfish and finfish habitats for miles," Hans Paerl, a scientist for the university, told the publication. "Fish kills lasted for months."

The National Weather Service reported that North Carolina's Cape Fear and Neuse Rivers won't return to normal levels until October. The Waccamaw River, however, is expected to reach its peak flood surge on Wednesday.

More Than 500,000 People in US Remain Without Power After Florence - Reports