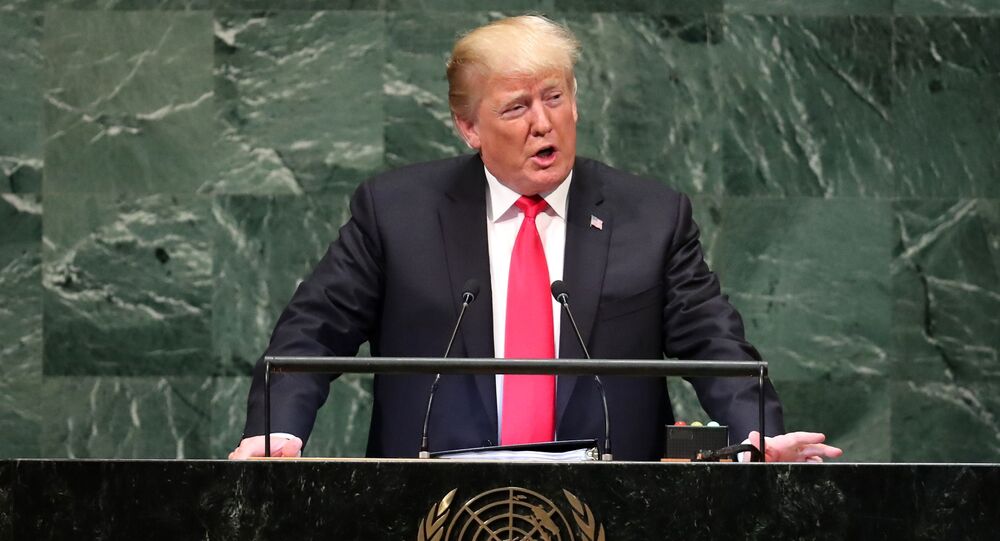 US President Donald Trump has wrapped up his address before the 73rd Session of the UN General Assembly in New York.

Emphasizing the need for a "reinvigoration" of the UN-led Syrian peace process and saying that "our shared goals [in Syria] must be the de-escalation of military conflict along with a political solution," Trump threatened a US military response if Damascus deployed chemical weapons.

"We urge the United Nations-led peace process be reinvigorated, but rest assured the United States will respond if chemical weapons are deployed by the Assad regime," he said.

© Sputnik / Grigoriy Sysoev
Iran’s Foreign Minister Slams US ‘Sense of Entitlement to Destabilize the World’
Targeting Tehran over its assistance to Syria in its fight against terrorism, Trump said that "any solution to the humanitarian crisis in Syria must also include a strategy to address the corrupt dictatorship in Iran." This, he said, included working with other countries to reduce the purchases of oil from Iran. "We will ask all nations to isolate Iran's regime as long as its aggression continues," Trump noted.

Recalling his decision to pull out of the Iran nuclear deal earlier this year, Trump noted that the US has launched a campaign of economic pressure to deny Iran the resources for its regional behavior in Syria and Yemen, and promised further sanctions after energy-related restrictions are introduced in November.

Praising cooperation between the US and its Gulf allies, Trump said this cooperation, together with the efforts of the US military, contributed to Daesh's* military defeat. "Thanks to the United States military, and our partnership with many of your nations, I'm pleased to report that the bloodthirsty killers known as ISIS have been driven" from Iraq and Syria, Trump said.

"We will continue to work with friends and allies to deny radical Islamic terrorists any funding, territorial support," Trump said.

© REUTERS / Mike Blake
US Troops to Remain in Syria After Daesh Defeated to Train Locals - Mattis
Washington reneged on President Trump's earlier promises to withdraw from Syria following Daesh's defeat. On Monday, Secretary of Defense James Mattis said that US forces would remain the country to train locals to "prevent the return of [Daesh] while at the same time diplomatically supporting…the Geneva process."

Trump accused countries of "abusing" the openness of the US market, charging some with "relentless product dumping, forced technology transfer, and the theft of intellectual property."

In a direct attack on China, Trump pointed to the loss of 3 million US manufacturing jobs to what he referred to as China's "market distortions." "Those days are over. We will no longer tolerate such abuse," he said.

© AP Photo / Andy Wong
'We're Not Just Going to Let Russia Be the Bogeymanan': US Reportedly Plans to Roll Out Multifaceted Anti-China Plan
Noting that the world trade system is in "dire need of change," Trump suggested that part of the problem stems from the World Trade Organization's lax standards. "For example, countries were admitted to the [WTO] that violate every single principle on which the organization is based," he said.

Washington slapped China with 10 percent tariffs on $200 billion-worth of Chinese exports on Monday amid the escalating trade conflict between the two countries.

Complaining about rising global oil prices, Trump accused OPEC nations of "ripping off the nations of the world. I don't like it, and nobody should like it," he said.

The president also accused Germany of allowing itself to become reliant on Russian energy supplies with the construction of the Nord Stream 2 pipeline. "Germany will become totally dependent on Russian energy if it does not immediately change course," he said.

Foreign Aid and US Sovereignty

Trump said that his administration is taking a "hard look" at US foreign aid to ensure that the US provides aid only to those who "respect" the US and are America's friends. The US, he noted, is the world's largest donor, "but few [countries] give anything to us."

In this vein, Trump said the US would "provide no support and recognition to the International Criminal Court. As far as America is concerned the ICC has no jurisdiction, no legitimacy and no authority," he noted. The Trump administration threatened to slap the court with sanctions earlier this month after the ICC said it was considering an investigation of suspected war crimes by US military personnel in Afghanistan.

Trump told the General Assembly that the US would not participate in the Global Compact for Migration initiative. "We recognize the right of every nation in this room to set its own immigration policy in accordance with its national interests, just as we ask other countries to respect our right to do the same, which we are doing. That is one reason the United States will not participate in the new Global Compact on Migration," he said.

Praising what he called a "bold and new push for peace" in the Korean Peninsula and saying he appreciates the personal efforts by North Korean leader Kim Jong-un in this direction, Trump noted that the "sanctions will stay in place until denuclearization occurs."

© Sputnik / Iliya Pitalev
North Korean Court Calls for International Legal System to Lift US Sanctions
The remarks are a far cry from Trump's inaugural General Assembly address in 2017, during which he threatened to "totally destroy" North Korea and mocked Kim with the epithet "Rocket Man."

Trump attacked the Venezuelan government of Nicolas Maduro, suggesting that Caracas' policies have led the oil-rich country to the brink of ruin and announced that the US has introduced new sanctions against Venezuelan officials.

"Today I stand before the United Nations General Assembly to share the extraordinary progress we've made. In less than two years, my administration has accomplished more than almost any administration in the history of our country," US President Trump said, with this boast prompting laughter from the audience. "Didn't expect that reaction, but that's okay," Trump said before continuing.

Ahead of his address, Trump tweeted that the US was "much stronger and much richer than it was when I took office less than two years ago."