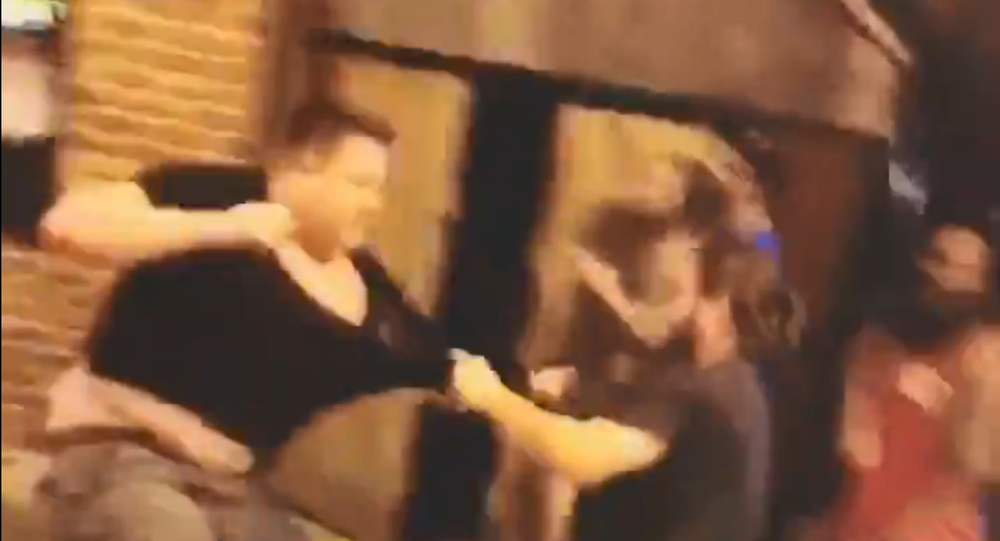 Video has emerged of a showdown outside a Kansas City bar in which a man confronted about his Proud Boys regalia picks a fight and gets the snot beat out of him for it as the crowd joins in.

The video, posted on Twitter September 17, was shot in the Westport District of Missouri's Kansas City, an area known for its dive bars and arts scene. As the scene unfolds on the street outside the Buzzard Beach bar, a bearded man confronts a man and his girlfriend, calling the man a "Nazi f*ck" and addressing the woman, who maneuvers herself between the two, by saying, "Do you realize what his shirt is?"

The shirt in question is a Fred Perry polo shirt, with trademark gold-striped collar and oak leaf chest emblem, the self-styled uniform of the Proud Boys organization.

Educate yourselves, raise awareness. Proud Boys are national and very likely organizing in your backyard. pic.twitter.com/3F36OPrRni

​​The Proud Boys are a "pro-western, conservative, men's fraternal organization" founded by Vice News co-founder Gavin McInnes. While they claim to be against the alt-right movement in the US, their proximity in terms of ideological positions and social organizing casts doubt upon those claims. Proud Boys visibly took part in the "Unite the Right" rally in Charlottesville, Virginia, in August 2017 that claimed the life of one counter-protester, and in the so-called "Battle of Portland," a protest-turned-street fight in the Oregon city on June 30 of this year, which saw dozens of Proud Boys and Patriot Prayer members, another far-right group, square off against anti-fascist counter-protesters, the Guardian reported.

As the bearded man explains to the woman why defending the man is a mistake, the polo-clad man flicks his lit cigarette at him, which explodes against his temple in a shower of sparks.

That's when it goes down.

​As the two men begin to grapple with one another, it seems the polo shirt man might have the advantage. People around the two, including the filmer, egg them on, yelling, "Bust his ass!"

But when the polo shirt man throws a sloppy punch, the bearded man grabs him by his sleeve and spins him around, nearly tearing the man's shirt off as he throws him against a shed.

With the polo-wearing man knocked down and dazed, the filmer yells "big boy down!" at him as the bearded man closes in with a flurry of punches to his head. Meanwhile, the man's girlfriend grabs the attacker by the hair, trying to pull him off her hubby.

In the struggle, the two men are separated, but the infamous Fred Perry polo is in shreds around the man. As he moves to re-engage the bearded man, who is attempting to return to the bar via the stairs, another man standing nearby throws him on the stairs as a third man drags him away by his feet, too dazed to effectively resist the humiliating maneuver.

The final icing on the cake: someone claimed the man's gold-barred shirt collar as a prize of victory.