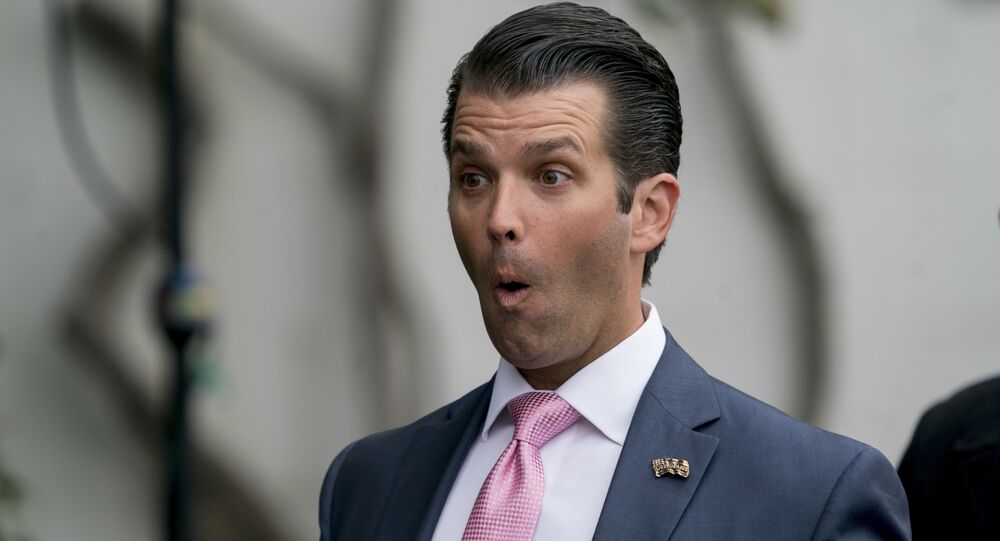 Trump Jr. earlier mockingly tweeted a photo of a CNN host who was reporting a flooding, implying that his coverage was exaggerated, but the picture in dispute turned out to be 10 years old.

Donald Trump Jr. was shamed on Twitter after taking a jibe at the mainstream media, his father's nemesis. The president's eldest son had tweeted a picture of CNN's host Anderson Cooper standing in waist-deep water while his cameraman stood on higher ground, implying that Cooper had exaggerated the extent of the flooding and citing CNN's dwindling ratings.

It’s a shame that CNN’s ratings are down 41%. What’s worse is there’s a simple solution that they refuse to accept. Stop Lying to try to make @realDonaldTrump look bad. https://t.co/O3XyWchsJh pic.twitter.com/BCUCxKnOvO

This post drew an unexpected response from a woman who claimed to be the cameraman's widow. She said that her husband died last September after working with CNN for 26 years.

This really hurts… my husband, pictured in this photo with Anderson Cooper, passed away September 27, 2017, almost 1 year ago. 26 years at CNN. @DonaldJTrumpJr & @realDonaldTrump HE’S MY HUSBAND. https://t.co/7tYmqFgYjW

Anderson Cooper himself lashed out at Donald Trump's accusation, saying the picture in question was not from Tropical Storm Florence, which has been raging through North Carolina, South Carolina and Virginia since last week, but rather from Hurricane Ike in 2008, when he reported on the just the opposite: receding waters.

"I don't expect the president's son to ever admit he was wrong or one of the president's former advisers or frankly anyone else who's retweeted these pictures," Cooper said. "But I at least thought that they and you should know the truth."

Trump Jr.'s gaffe triggered a plethora of stinging comments from enraged netizens, with some claiming there are "no boundaries on dignity" for the Trumps.

Condolences from Australia:(- I cannot believe the trumps are allowed to get away with these types of lies every day. They are worse than scum of the earth — They disgust me so much I can barely even look at their faces.

@realDonaldTrump can look bad all by himself. He doesn/t need help from anyone!!!!

I’m sorry for your loss. They have no boundaries on decency.

Your father is a liar, a cheat and the most illiterate and cold "leader" we have ever had. Looks like his ratings are down…that is what happens when you are the playground bully. At least CNN is a real news station…Fox is a reality show.

I have truly never seen someone double down on their stupidity as much as you do. Do you have a single person in your life that calls you out on this nonsense? Just one?

Is Trump Under Water or Surging to a Second Term?