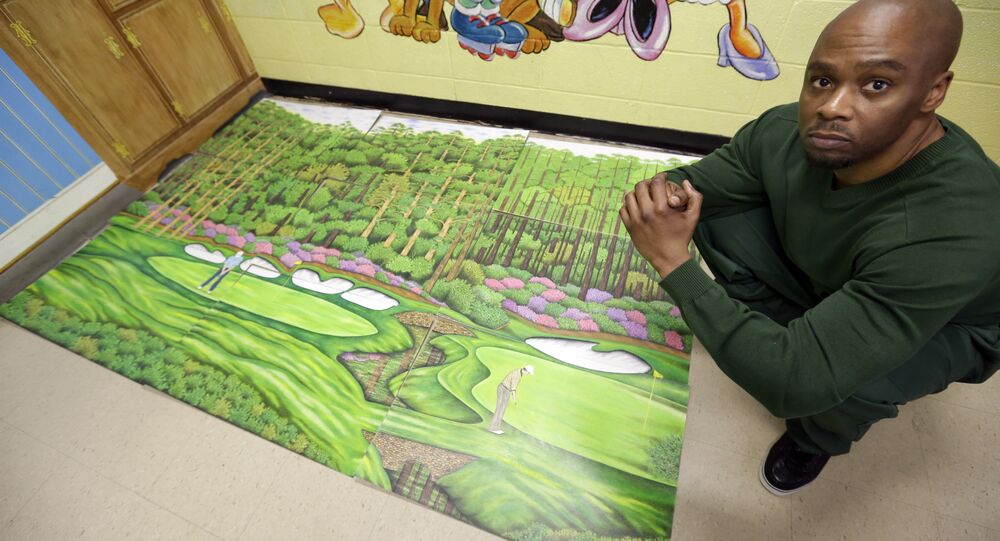 A convicted murderer who sent his imaginary drawings of golf courses to a golfing magazine has walked free from jail. Sputnik spoke to golf journalist Max Adler, who helped prove Valentino Dixon was a victim of a miscarriage of justice.

Six years ago Dixon, who was in New York state's notorious Attica prison, wrote to Max Adler, the editorial director of Golf Digest magazine, and sent him some drawings of some of the golf courses he had dreamt up.

Behind bars, Dixon spent up to 10 hours a day creating vivid landscapes using crayons and pencils.

"The guys (in prison) can't understand. They always say I don't need to be drawing this golf stuff. I know it makes no sense, but for some reason my spirit is attuned to this game," Dixon told Adler.

​"I remember the handwriting of that first letter. It had remarkable penmanship, as you would expect of his art. He introduced himself and talked about his conviction, but couched it in terms of you know 'everyone in here says they're innocent but hear me out' and then he enclosed some small drawings. It was really the art that captured my attention. I was more interested in the art than in his conviction," Mr. Adler told Sputnik.

Adler and Dixon began corresponding and the journalist asked more about why the native of Buffalo, New York, was in jail.

Dixon was serving 39 years to life for murdering a man after a fistfight on a Buffalo street corner in 1991 got out of hand. Torriano Jackson, 17, had been shot dead during the altercation and police decided Dixon was the perpetrator.

Another Man Confessed To The Crime

"The case is complicated, but on the surface it involves shoddy police work, zero physical evidence linking Dixon, conflicting testimony of unreliable witnesses, the videotaped confession to the crime by another man, a public defender who didn't call a witness at trial, and perjury charges against those who said Dixon didn't do it," explained Adler in an article on the magazine's website.

Adler drew the case to the attention of law students who produced a documentary last year as part of Georgetown University's Prisons and Justice Initiative.

Dixon, who spent 27 years in jail, walked free after the court accepted another man committed the murder.

© AP Photo / David Duprey
Dixon holds one of his golf course drawings. He said he had never been into golf before going to jail

"There was a fight. Shots were fired. I grabbed the gun from under the bench, switched it to automatic, all the bullets shot out. Unfortunately, Torriano ended up dying. I dropped the gun and ran and it was over and done with," said Lamarr Scott, who was already in prison for an unrelated attempted murder.

"Valentino accepts he was a drug dealer, as were a lot of under-privileged African-Americans growing up in the 'hood in Buffalo. He accepts that but it was 27 years ago," Mr. Adler told Sputnik.

"It went so far beyond reasonable doubt that it's pretty outrageous that he would have been convicted and it would have been upheld," said Marc Howard, director of Georgetown University's Prisons and Justice Initiative.

Dixon's mother, daughter and other relatives greeted him on the steps of the court and took him for a celebratory meal.

"I love y'all. It feels great," he told the crowd after changing out of his prison uniform for the first time since 1991.

Valentina Dixon, was only a baby when he went to prison.

"We're definitely going to go shopping and go explore life. I can't wait to get him a cellphone and teach him how to Snapchat," said Ms. Dixon, who brought her 14-month-old twins, Ava and Levi, to court from her home in Columbus, Ohio.

Mr. Adler said Dixon was determined to make art his career, although he doubted he would be able to design golf courses.

"For golf course design you need to know about the sport and about agronomy and it's a whole different skill set. But he is so passionate about his art and he wants to be an artist as a career," Mr. Adler told Sputnik.

The Erie County District Attorney John Flynn told reporters Dixon was a hardened criminal at the time of the incident in 1991.

"Mr. Dixon is not an innocent man. Don't be misguided in that at all. He was an up-and-coming drug dealer in the city of Buffalo," Mr. Flynn told reporters.

He said Scott had been Dixon's bodyguard and had been given the gun, a Tec-9 semi-automatic, by Dixon.

Judge Susan Eagan let stand a count of criminal possession of a weapon against Dixon, but freed him because of the time served.

$20Mln Wrongful Conviction Settlement in Illinois Largest in US History

EXCLUSIVE: New Hope for ‘Miscarriage of Justice' Victim in UK Jail for 25 Years