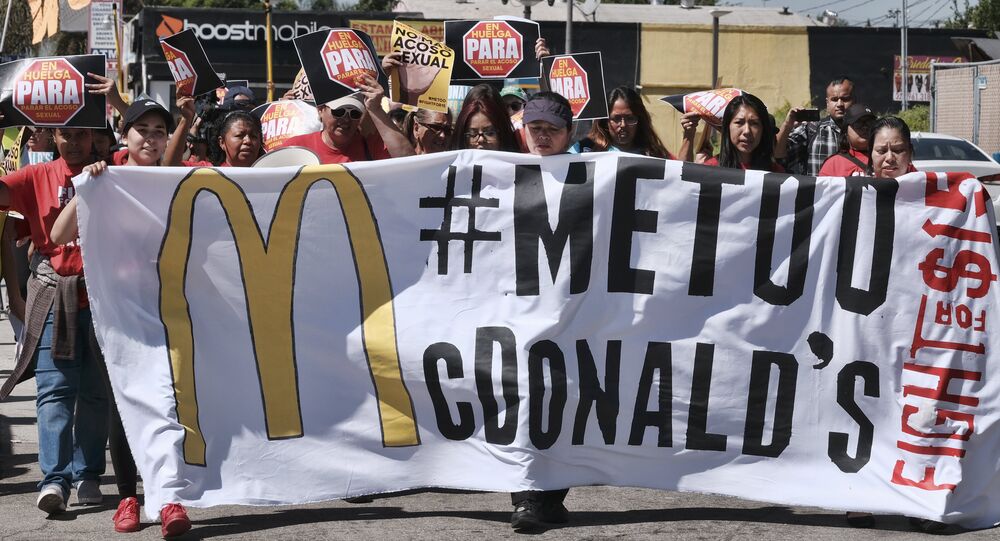 The world’s biggest fast-food employer faces charges from ten workers as hundreds of cooks and cashiers in ten US cities walked off the job on the first multi-state strike over harassment allegations.

Mcdonald’s employees following the #MeToo movement demonstrated outside company's Chicago headquarters to draw attention to the suppression of the harassment cases, chanting "We're here, we're loud, sexual harassment is not allowed," and "Respect us, accept us, don't try to touch us," NBC News reported. Other protesters shouted out “We are not on the menu.”

At the @McDonalds HQ for @MsMagazine w/ restaurant workers and activists to say #metoo and demand that McD ends workplace sexual harassment. This is the first strike against sexual harassment in over 100 years. #shutitdown pic.twitter.com/ipjNnDLti5

​Live: We’ve started our silent marching to McD’s HQ to demand that McDs follow its policies on sexual harassment, train their managers, and take part in a committee of workers, corporate and franchise reps, and women's groups to address the issue. #Fightfor15 #MeToo pic.twitter.com/JrzFopL3h2

Organizers told the AP that the strike targeted restaurants in Durham, North Carolina; Kansas City, Missouri; Los Angeles; Miami; Milwaukee, Wisconsin; New Orleans; Orlando, Florida; San Francisco and St. Louis, Missouri, making it the biggest multi-state strike in the history of the company. Employees went on the rally with red and yellow banners and giant posters, inspired by the ones used during #MeToo protests to shout for their rights.

Workers and women’s groups including #MeToo and #TimesUp staged a lunchtime strike outside the #McDonalds restaurant on W. Florence Ave in LA to protest what they call widespread sexual harassment. It was part of a 10-city strike nationwide. @KNX1070 pic.twitter.com/GuI30MvlAP

McDonalds workers are on strike against sexual harassment to raise awareness, hold them accountable, and push for better resources when issues arise. If you’re able, don’t eat at McDonalds today. Standing with McDonalds employees & those who have experienced sexual harassment 💙 pic.twitter.com/DSv2gW6qjC

Workers at the rally said that sexual abuse coercion and harassment are everyday occurrences in the restaurants and that Mcdonalds didn’t address these problems despite the complaints to the federal Equal Employment Opportunity Commission (EEOC) that had been filing on behalf of workers since 2016.

10 employees filed charges against the company detailing the cases of harassment in the workplace, according to the Fight for $15 workers’ rights group. The charges were supported by Time’s Up Legal Defense group, helping to fund the legal fees. "Sexual harassment puts working people in a no-win situation — forcing them to choose between a paycheck and enduring abuse," Fatima Goss Graves, president and CEO of the National Women's Law Center, said in a statement.

Tanya Harell, one of these ten women who brought up the charges, said that one of her co-workers started to touch her breasts and backside, while another co-worker tried to have sex with her without her consent. The manager in the restaurant did not take her words seriously and told she was acting “like a little girl.” Other stories showing the cases of inappropriate behavior from co-workers and managers suggested that some employees exposed themselves in front of females and made suggestions that woman came to this job to “work as prostitutes."

Adrianna Alvarez, who worked at the company for nine years, told the Guardian that the problem is “nationwide, worldwide.” “People are scared. They worry that if they complain it will affect their legal status, they could get fired or there could be retaliation,” she said, noting that all the women employees she knows have the examples or know of people who had been affected.

The company ignored us.

This shows how much we’re disrespected and mistreated as employees.” Adriana Alvarez #Fightfor15 #MeToo pic.twitter.com/cqzyuFlldX

A McDonalds spokesperson said that “There is no place for harassment or discrimination of any kind at McDonald’s.” and that the company engaging third-party experts from Rainn, an anti-sexual violence organization, and Seyfarth Shaw at Work, an employment law training firm, to “evolve” its policies, training and procedures.

According to 2016 survey conducted by Hart Research Associates, 40% of women in the fast-food industry reported facing sexual harassment, with only 4 in 10 reporting the issue to their employer, trying to avoid the harasser instead.