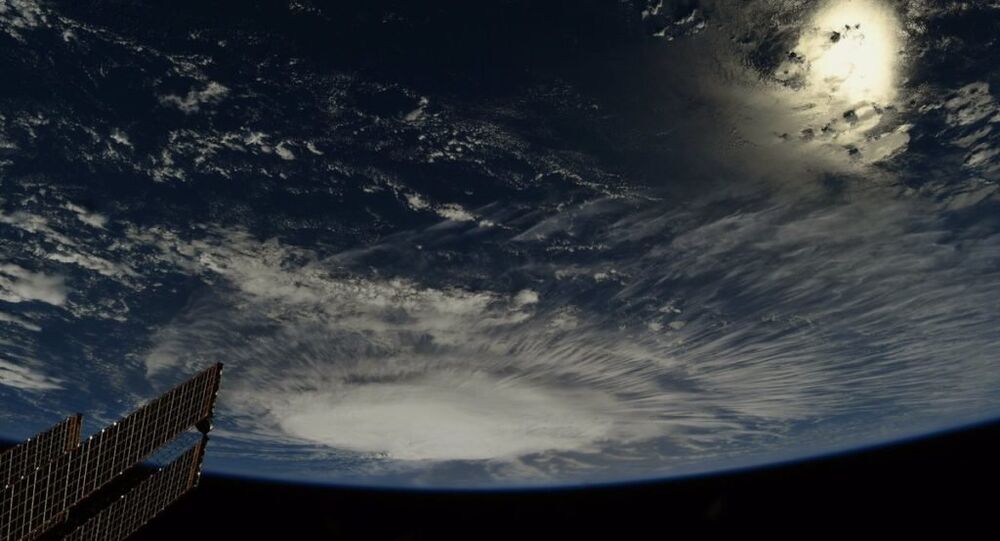 US residents, media and even astronauts are sharing photos and videos of the furious nature disaster, which has already claimed several lives as it started ripping through the US mainland yesterday.

Hurricane Florence might have been downgraded to a category 1 storm, but it hasn't become less deadly. Although its winds weakened upon hitting the mainland, it is reportedly carrying some 18 trillion gallons (68 trillion liters) of water with it and has already started unleashing it on city streets in North Carolina.

The situation was further worsened by the fact that the storm had lost its speed prior to reaching land, allowing it to accumulate more water, which it is set to let loose on North Carolina, travelling through it at 5 miles (8 kilometers) per hour. According to the Weather Channel, the expected flooding in the state could range from 3 feet (0.9 meters) to 9 feet (2.74 meters) and presented a chilling visualization of how dangerous such a flood could be.

This @weatherchannel visualization of storm surge is an amazing and sobering use of technology to show what hurricanes like Florence can do pic.twitter.com/fuszIcOR3s

Some of North Carolina's beaches were pummeled by the power of the upcoming hurricane, as the waves rushed through minor protective sand dunes, flooding coastal areas in a matter of seconds.

Weather experts estimated that some regions might face flooding high enough to cover the ground floors of buildings. Some videos and photos posted by users online suggest that the estimation was correct.

Update: Pics of flooding downtown while looking for citizens who may need assistance. @CityofNewBern #HurricaneFlorence2018 pic.twitter.com/Ebgfh1hlt5

One resident in Belhaven, North Carolina filmed the water practically reaching the first floor of her house.

The flooding is not the only threat that the Carolinas and some inland states face. Severe winds have already led to the death of a woman with an infant after a tree fell on a house.

In dramatic footage filmed by Fox News, the channel's correspondent reports on the situation regarding power outages in Carolina Beach, as two power transmitters explode nearby, producing huge electrical sparks after being ripped by the storm.

A completely different perspective of hurricane Florence was given by astronauts from the International Space Station, who filmed the giant storm from space as it hit the US mainland.

Hurricane Florence made landfall near Wrightsville Beach, North Carolina, on September 14 and is continuing its way deeper inland. It has already left hundreds of thousands of homes without electricity and resulted in at least 5 deaths so far.