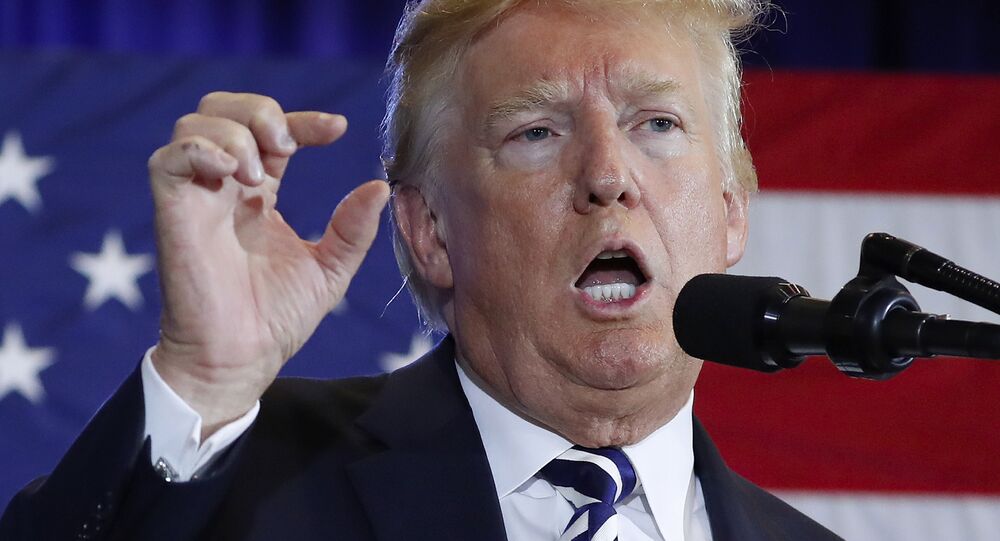 The document does not point out specific countries or actors, which, according to the US, might be sanctioned.

US National Security Adviser John Bolton announced that US President Donald Trump had signed a document, allowing for sanctions to be placed on states or actors responsible for meddling in the country's elections. The security chief noted that the legislation aimed to "protect the United States from foreign interference in our elections and really our political process more broadly."

"The executive order requires the Director of National Intelligence to be conducting regular assessments about potential foreign interference in the election. It asks for reports by the Department of Justice and the Department of Homeland Security in the case of interference with an election or campaign-related infrastructure," Bolton said.

© REUTERS / Mike Blake
Russia Blames Google of Interference in Russian Elections, IT Giant Not Responding - Watchdog
As the official noted, the sanctions will include blocking assets and limiting access to the US financial system. Bolton specified that sanctions might be introduced, apart from the meddling itself, over the distribution of propaganda and misinformation to a global audience.

"You will see in the text of the Executive Order when it comes out, Section 2 is blocking assets," Bolton said. He added that other possible punitive measures would include "limiting access to American financial institutions."

The list of possible actions includes blocking transactions, export license restrictions, restraints on foreign exchange transactions and prohibitions against US citizens investing in companies that may be involved in malicious activity, Bolton added.

He went on saying that the executive order describes a process whereby the Department of State and Department of Treasury would decide on the appropriate sanctions to recommend and impose on countries or actors that engage in interference.

Earlier in the day, US President Donald Trump, who was himself repeatedly accused of collusion with Moscow with the aim of winning the 2016 presidential race, once again suggested that the investigation into the issue conducted by Special Counsellor Robert Meuller should be stopped.

"Russian 'collusion' was just an excuse by the Democrats for having lost the Election!" the president commented on the probe, which had failed to find any substantial evidence of collusion.

“The President has absolutely demonstrated no wrongdoing whatsoever & that the Special Counsel has no evidence of any wrongdoing. In other words, it’s time to end this Witch Hunt.” @LouDobbs Russian “collusion” was just an excuse by the Democrats for having lost the Election!

At the same time, US Director of National Intelligence Dan Coats stated that Washington believed that several countries, including Russia, China, Iran and North Korea, had either the intention or capability of interfering in future US elections.

"We have seen signs of not just Russia, but from China, and capabilities potentially from Iran and even North Korea," Coats said.

"There's a 45-day period of time in which the intelligence community through the office of Director of National Intelligence assesses whether or not there has been manipulation and influence that affected the election outcome," Coats said.

Moscow has repeatedly rejected any interference in the US 2016 presidential election, as well as meddling in other nations' affairs, calling these accusations "absurd."

The legislation was signed less than 100 days before the US midterm elections, and just two months after Trump was derided by both Democrats and Republicans for declining to press Russian President Vladimir Putin harder on Russia's alleged election meddling, during their recent meeting in Helsinki.