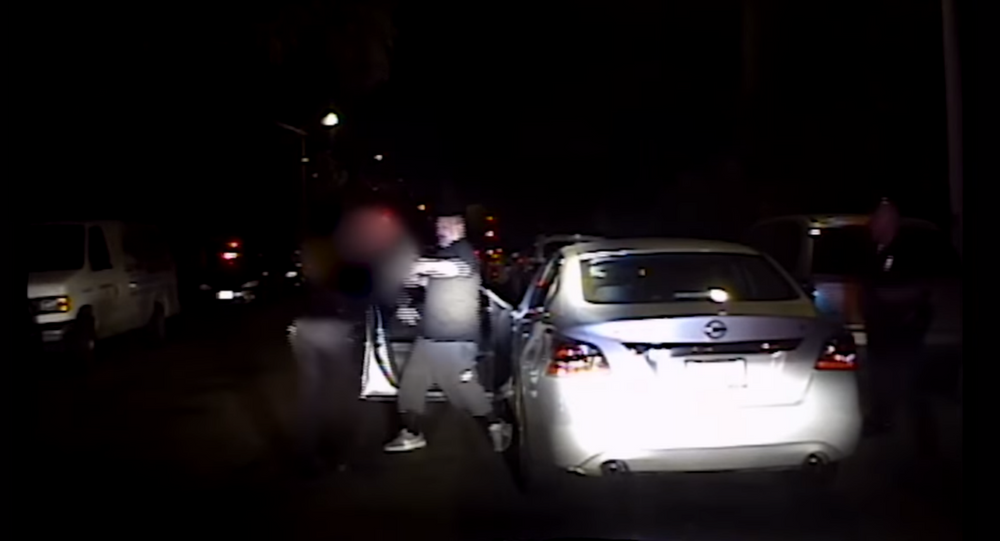 California's Los Angeles Police Department (LAPD) released body and dashboard camera footage on Monday that shows the moment one of its officers was shot at point-blank range during a routine traffic stop earlier this year.

Footage of the July 27 episode was released as part of a new LAPD policy that states recordings of a police officer-involved shooting must be made public within 45 days of the incident. The department released the video on the 45th day after the shooting.

The video shows the unidentified female officer and her partner, Officer Miguel Alarcon, approaching a Nissan Altima in Los Angeles' North Hills community. According to the LA Times, the female officer has not yet been identified because she has "confidentiality protection as a victim of a violent crime."

​Once the pair are standing on opposite sides of the vehicle, the female officer, appearing to recognize driver Richard Mendoza, asks if he's still on probation. "Haven't seen you in a while. You still on probation?" she says.

Mendoza responds by saying that he has some nine months left on his term. After Mendoza complies with an order to step out from his car, bullets fly as Mendoza discharges his hidden firearm at the officer before directing his attention to her partner.

Alarcon quickly responds by ducking and firing his own weapon at Mendoza until he drops to the ground, video shows. An additional bullet is fired by Alarcon at Mendoza despite the fact that he's already face down and lying motionless.

The remainder of the footage shows the female officer yelling out in pain and telling Alarcon that she was shot in her left leg. Alarcon is also spotted placing Mendoza in handcuffs as a puddle of blood forms around him.

Once medics arrived, both the female officer and Mendoza were transported to a local area hospital. Mendoza, who was a member of the Vincent Town street gang, was pronounced dead after succumbing to multiple gunshot wounds to his torso and head.

LAPD Chief Michel Moore told the Times on Monday that the footage shows just how dangerous some of the situations that officers find themselves in can be. "By the grace of God she is alive. Officers are fearful in these situations, and the public here gets to see why," he said.

"Once a person has you in that position, it is very tough. You cannot stop that first one or two shots," Moore added, before stressing that Alarcon's quick response prevented the situation from escalating even further.

According to Moore, the female officer is "OK" and currently recovering from a shattered femur.

The shooting incident is still being investigated by officials.

Homicide Suspect Livestreams His Shootout With LAPD on Facebook

This is How LAPD Drones Spy on You...