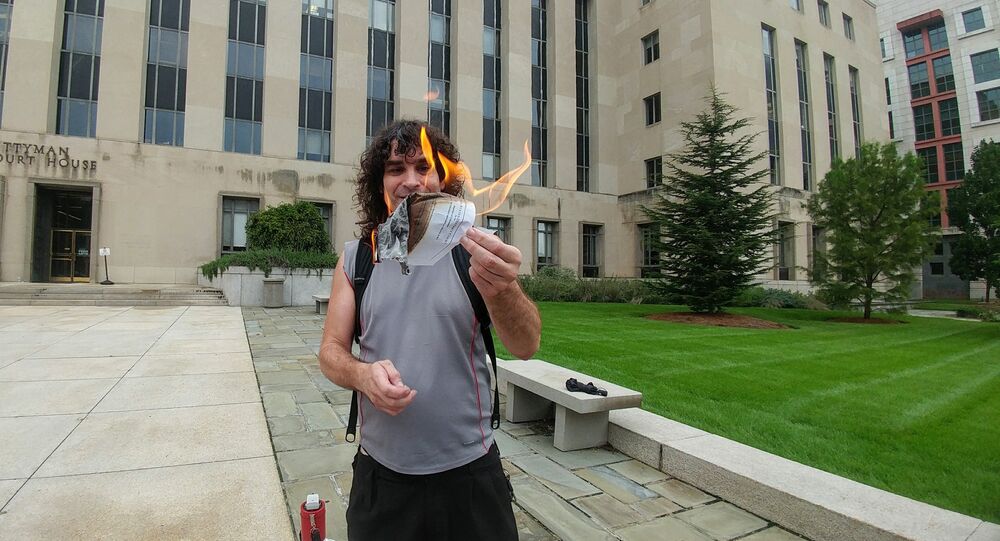 A federal grand jury in Washington, DC, dropped its subpoena against an independent journalist minutes after he lit it on fire outside the courthouse where he was originally set to testify on Tuesday.

DC Indymedia reporter Luke Kuhn was served a subpoena September 5 informing him that he was "commanded" to testify before a federal grand jury over footage he shot August 12 in Washington of a small group of white supremacists rallying in front of the White House as tens of thousands of counter-demonstrators protested them.

The subpoena, which was shared with Sputnik News, ordered Kuhn to provide the grand jury with "all recorded images, audio and data of protests" during the day that he had stored on his camera. Kuhn feared that his testimony and forfeiture of his footage could be used in a criminal case against protesters who rallied against the white supremacists, who were holding a rally in commemoration of their deadly demonstration in Charlottesville, Virginia, the year prior.

"I will not betray my own people," he said.

"They wanted me to appear today on September 11, a highly prejudicial date — they didn't get it; we have a delay," Kuhn explained to reporters and activists rallying for him as he announced his resistance to the order.

According to US law, failure to comply with a subpoena can result in imprisonment on contempt of court charges and possible fines. Nonetheless, Kuhn was resolute in his refusal. "I will not be cooperating with this if it's reissued," he said.

"As far as I'm concerned, any investigation targeting any part of the opposition to the insane dictator [US President] Donald Trump has to be protected," Kuhn told Sputnik News. He was not informed of the nature of the questions he was to be asked, whom the federal prosecutors were investigating and seeking charges against, nor the nature of those charges.

Kuhn highlighted that he was being targeted by the criminal justice system in an effort to criminally indict antifascist protesters, while the neo-Nazis they were opposing that day don't appear to be similarly scrutinized. "It's very obvious, cops and the Klan work hand-in-hand," he told Sputnik News, echoing a popular antifascist chant.

Some 20 or so protesters rallied in support of Kuhn outside the courthouse where he was originally supposed to testify, with many of them wearing masks bearing his likeness. Local antifascist organizer Lacy MacAuley told reporters that they "will not be intimidated by the state" or "comply with grand juries."

"We do not know why this individual's footage is being subpoenaed, though we may have a few theories," MacAuley said. "Anarchists and antifascists in the United States have taken a longstanding, principled position of opposing grand juries," calling the convening of the juries a "witch hunt" and a "heavy-handed, authoritarian means of controlling and terrifying a population."

"Bringing people in for questioning and seizing people's footage as evidence, without anyone knowing why the state is doing so, is the kind of behavior we would expect from a fascist state," MacAuley concluded.

Protesters marched through the streets for a short period before resuming the rally, chanting "DC resists grand juries."

Outside the courthouse where Kuhn was set to testify, he announced, "This is as close as I am going to get to that grand jury room."

As he was doing so, a courthouse worker walked up to the rally and informed the activists that they needed to leave, as they were standing on private property. However, the grounds outside the federal courthouse are federal property. Ultimately, activists were allowed to continue rallying until they decided to stop.

Kuhn burned two copies of the subpoena he was issued. Minutes after burning the second copy, Kuhn stepped aside to take a phone call. "I just got a call from my attorney," Kuhn announced. "The subpoena has been withdrawn. They have given up. They have thrown in the towel. We have won. They have lost."