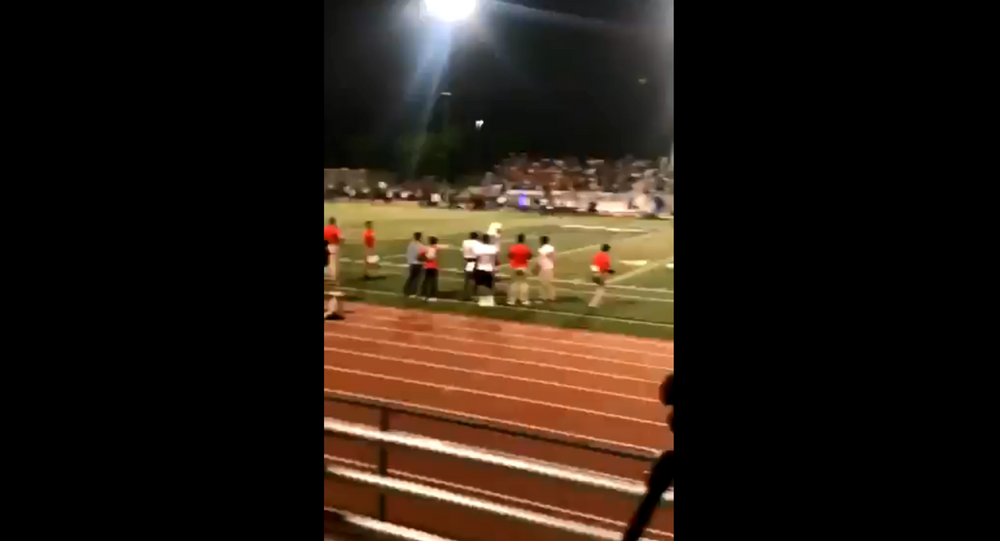 The principal of California's Santa Ana High School took to Facebook Friday night to reveal that his school's football team and students were the target of racially insensitive chants and posters when the team played against nearby Aliso Niguel High School.

In his post, Joseph Bishop noted that he saw several Aliso Niguel posters sporting offensive remarks, such as "We Love White" and "Build the Wall," a reference to US President Donald Trump's campaign promise to build a wall on the US-Mexico border. Santa Ana has a predominantly Latino student body; Aliso Niguel high school is mostly white.

"What I love about our coach is that at no time did he allow this unchristian hate from the Wolverine stands affect his team," Bishop wrote, referencing the opposing school's team. "After hearing chants from the student cheering section — ‘USA-USA-USA' after the first two touchdowns, morally — I could not ignore it anymore!"

"After talking to the principal [of Aliso Niguel] and watching her and her assistant principals snag the signs away from these disrespectful and out of control students — it seemed to help," he added, stressing that after the matter was dealt with, the game "became more about football, athleticism and a healthy competition between two high school football teams."

​Diving into the matter further, Bishop bashed the behavior he witnessed, saying, "[Aliso Niguel] are not playing an international team. My students are scholars, dreamers, American citizens; They are good kids! [Aliso Niguel] was not playing against Germany, or Mexico. They were playing my kids, 22 minutes down the [freeway]."

Though things did seem to settle down after the two principals spoke, the trash talking didn't end on the field. After Aliso Niguel took the win with a score of 42-21, an Aliso Niguel player told a Santa Ana player that "it's not a good day to be a Mexican today," according to Bishop. The Santa Ana student brushed off the incident, Bishop said.

"There were two political signs… one said ‘Bring Back Obama' and one said ‘We're Going to Trump You,'" she told the publication. Although a "Trump 2020" sign was also removed, she failed to find the "Build the Wall" sign that Bishop referred to in his Facebook post.

"But it's not outside the realm of possibility that there were students in the parking lot with signs we did not see," Christensen added.

According to the Aliso Niguel principal, the game's USA theme was chosen to commemorate the anniversary of 9/11 and was by no means meant to be a political statement. An Instagram account associated with the high school does urge students to "wear red, white and blue," but makes no mention of 9/11. The image is captioned "‘murica."

​After catching wind of Bishop's remarks, current and former Santa Ana alumni took to social media to voice their opinions on the matter. Other shocked netizens chimed in.

​Christensen told the Register that Aliso Niguel administrators would be looking into the incident further. It's unclear if students who saw their signs confiscated will be reprimanded.