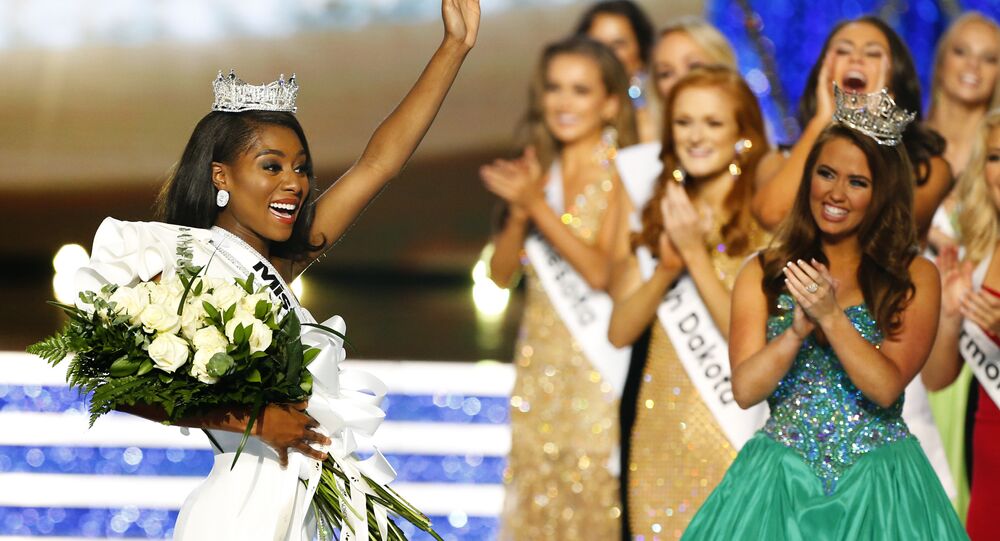 In the wake of the #MeToo movement, the contest has undergone a number of changes, with this year’s event being held without a swimsuit competition for the first time in the beauty pageant’s history.

On Sunday night, Nia Franklin, a 25-year-old contestant from New York, was crowned Miss America 2019, having edged out 50 competitors in Atlantic City.

Franklin graduated from the University of North Carolina School of the Arts, where she majored in music composition, and she dazzled the contest’s jury with her voice, singing “Quando m’en vo’” from the opera “La Boheme” for the talent competition.

During the competition she explained how being Miss New York had helped prepare her to be Miss America.

“I have New York grit. […] And also, as a New Yorker, I understand what it takes to work hard. I came up on a Lincoln Center fellowship because I'm an artist, and I'm really excited to just share my platform my social impact advocating for the arts and make sure all students have access to a quality education."

Humbled to have walked the Miss America Red Carpet last night for the last night of preliminary competition. I love you New York! God is so good! Watch the finals night to see who will make top 15 and win Miss America 2019 live on ABC — Sunday at 9pm! #missamerica

The lion’s share of social media users were fascinated by Franklin’s performance and speech:

IMHO Nia Franklin was the clear winner from the beginning of the program… way to go Miss New York! #MissAmerica

I know I’m from Florida and should show state loyalty, but y’all go ahead and fit that crown for Miss New York’s talented head. 👑 #MissAmerica

Not a fan of the concept of a pageant but I confess that I watched the last 30 minutes and as a New Yorker I actually squealed with delight that Miss New York won. #MissAmerica

Congrats to Miss New York! She is a sweetheart and class act. She will be an amazing representative for this program #missamerica

The organization of this year’s event went through a couple of changes in light of the anti-harassment movement, #MeToo, among which was the suspension of the swimsuit competition for the first time in the pageant’s nearly century-old history.

Instead, the organizers gave the candidates more time to talk onstage about themselves, their view and the way they see themselves doing the job of Miss America.

The change, however, disappointed many users, who believe that swimsuit competition is an integral part of the annual contest:

I still think the swimsuit competition shouldn’t have been removed. I never felt it sexualized the women competing for the title. On the contrary, I think it showcased another aspect of beauty, carriage of confidence & fitness for the contestants. #MissAmerica #MissAmerica2019

I miss the swimsuits. There I said it. #MissAmerica

Get rid of the political correctness. Bring back the swimsuits and glamour of the 80’s and 90’s. #MissAmerica

taking the swimsuit portion of #missamerica away is like taking tackling out of football.

These changes are dumb. Bring back swimsuit! #MissAmerica

#MissAmerica didn't feel like a "competition". It felt like I was watching a meet & greet. These women have worked hard to get on that stage & deserve a proper showcase & competition. Bring back swimsuit & evening gown! It's 2018 women can be educated, talented, fit & elegant.

This is one of the most boring #MissAmerica pageants. Where's the stuff that makes it a beauty pageant like the swimsuits? Those questions and talent? Miss the old format. pic.twitter.com/FegzR9UjxB

Reigning Miss USA Cara Mund, who crowned Franklin, has been embroiled in the organization’s latest controversy. Last month she lashed out at Miss America’s CEO, Regina Hopper, and chair, Gretchen Carlson, claiming that they had “silenced me, reduced me, marginalized me, and essentially erased me in my role as Miss America in subtle and not-so-subtle ways on a daily basis.”

"After a while, the patterns have clearly emerged, and the sheer accumulation of the disrespect, passive-aggressive behavior, belittlement and outright exclusion has taken a serious toll,” she wrote in a letter.

Carlson denied her allegations in a statement on Twitter, saying that she was “surprised and saddened beyond words by the letter.”

Please see my statement in full below pic.twitter.com/rvmee4es7g

With the exception of crowning Franklin, Mund was visibly absent from most of the show.