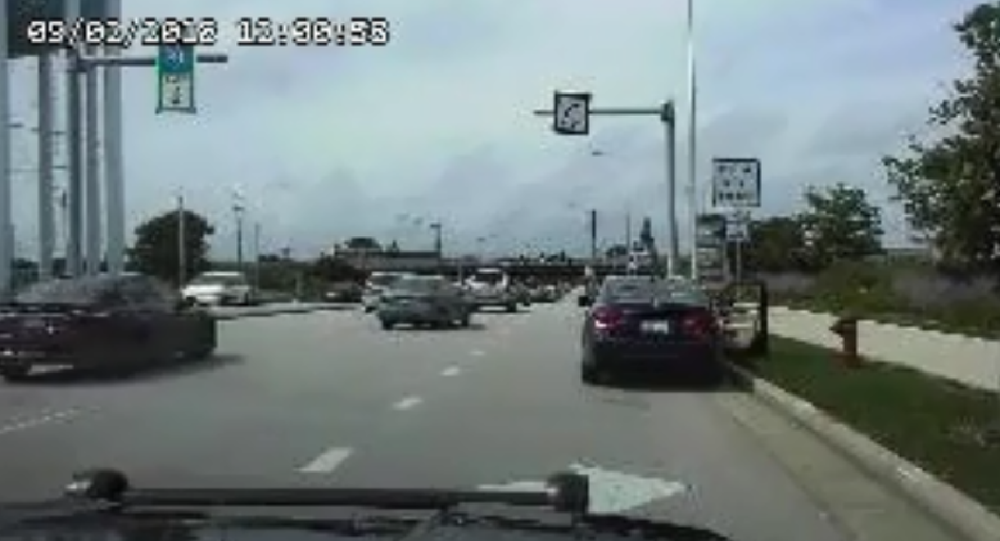 A Wisconsin teenager heading home with his grandmother on Sunday found himself in handcuffs after two locals told officers from the Wauwatosa Police Department assumed he was actually robbing his grandma and her friend.

Akil Carter was sitting in the back of a blue Lexus with his grandmother and family friend in the front when police pulled the vehicle over. The group had just left church and were driving to Carter's grandmother's house.

Officers were initially tipped off to the churchgoers at roughly 11:50 a.m. local time on Sunday when a couple flagged them down and told them that "there were two black guys robbing a lady in a blue Lexus," Wisconsin news station WISN reported.

After directing the vehicle to pull over, officers instructed the teenager to exit the car with his hands up. Police footage obtained by the Milwaukee Journal Sentinel later shows the 18-year-old Carter being directed to sit in the back of a police cruiser while handcuffed. Officers then proceed to ask him several questions regarding his relationship to the two women in the car.

​"I'm guessing what this sounds like is a really big misunderstanding," an officer tells Carter. "I'm not exactly quite sure what's going on… but the officers actually… the reason we stopped you is somebody told them something about what was going on in that car."

Moments later, a second officer nears the cruiser and informs his partner that Carter is "good." The footage from the cruiser camera ends with officers reiterating that he was cuffed and questioned because of a "misunderstanding." Carter was inside the cruiser for roughly six minutes.

Additional dashcam footage captured a conversation between an officer and Carter's grandmother, detailing the moments after Carter was asked to exit the Lexus and stand to the side.

"Is everything okay?" the officer asked Carter's shocked grandmother. She quickly responded by saying that Carter was her grandson.

After the officer explained the situation and recounted the tip they'd previously received, the grandmother told the officer the tipster had jumped to conclusions. "I'm sure he saw two old, white ladies in a car with a black kid and he made some assumptions," she responded.

When officers explained that the couple who'd reported the incident were black, she responded, saying, "Oh my God. Then it's even worse."

It was also reported that officers on the scene did remove their department-issued handguns from their holsters. They did so on the basis that a possible violent crime was being committed, Wauwatosa Police Captain Brian Zalewski said in a statement to WISN.

© AP Photo / Roy Dabner
‘You Need to Get Off the Police Force': Ohio Police Investigating Officer Who Used Stun Gun on 11-Year-Old

Zalewski stressed that the firearms remained pointed toward the ground and not at Carter. "The officers acted professional during the entire interaction," he said.

According to the Journal Sentinel, Carter's family has obtained legal representation and submitted a document preservation demand to the police department regarding any files related to the weekend traffic stop.

"After we take a look at whatever basis they have for stopping and harassing this family, we will be able to comment further," Joy Bertrand, a lawyer for the family, told the outlet. "Once we take a look at those documents, we will have further comment."

Wauwatosa police are looking for the couple who reported the incident in order to get a formal statement. When officers returned to find the pair, they'd already left the area.